We should be looking for ways to empower states and localities, including through secession, and through global activist alliances.

Eight years ago Yes! Magazine published a political platform of progressive policies, along with polling showing strong majority support for each proposal. Now, eight years later, we can show almost total failure to advance any of the proposals, most of which were focused on the U.S. federal government.

Where there have been any small successes, they have mostly come at the state or local level or outside the United States. New York State just took a step toward free college and Washington State toward shutting down fossil fuels while everyone was watching Donald Trump’s twitter feed. Most of the world’s nations are working on a new treaty to ban nuclear weapons from the earth, while Obama’s government has invested heavily in new nukes and (far more offensively, I’m told) Trump has tweeted about them.

The general federal-level failure in the United States is very clearly because the U.S. government in Washington D.C. is a financially corrupted and anti-democratic structure, and because the U.S. public is generally disinclined to hold it accountable. The United States enjoys remarkably less activism than many other countries, and suffers as a result.

A huge reason for the activism shortage is partisan loyalty. Of that minority of people who will do anything at all, many will only make demands of or protest members of one political party. For the other party all is forgiven. And most policy positions are utterly expendable at the slightest shift in the party line. Witness the current Democratic fever for believing the CIA on faith and desiring hostility toward Russia.

This partisanship masks the steady destruction of each area in that Yes! platform as it progresses unperturbed through presidencies of both parties alike.

Putting forth a positive program and pushing for it is exactly the right thing to do, and not for simplistic or mystical, but for very practical reasons. And informing each other that we are a secret majority is exactly right as well. But there is always a danger of Panglossian distortion in an attitude of positivity. The fact that someone can start an organic urban garden should not actually blind us to the fact that the taxes paid on the garden’s income will go toward preparing for wars, destroying the earth’s climate, imprisoning the garden’s neighbors, poisoning the garden’s water, and forbidding any honest definition of what “organic” means. 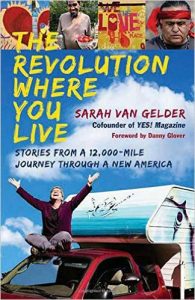 So it was with both eagerness and trepidation that I picked up the new book, The Revolution Where You Live, by the Cofounder of Yes! Magazine Sarah Van Gelder. It’s a book about local activism that doesn’t try to spin away the general context of growing apocalypse, but tries to find models for duplication and expansion. Some of the stories are familiar or from decades gone by when we know there was greater activism afoot. But some are neither familiar nor old. These tales of local organizing succeeding against economic, environmental, and racist evils should be far more present in our minds than some silly hope that Hillary Clinton be subtly impolite while celebrating with Trump at his inauguration.

These accounts collectively also seem to point to the critical importance of investing in local banks and divesting from evil corporations. This focus should be useful to activists in all fields.

Any Panglossianism in Van Gelder’s book is by omission and not unique to her but nearly universal. I refer of course to the fact that she has written about touring localities in the world’s war machine without ever mentioning it. Even in an account of admirable efforts to improve the treatment of refugees, there is no mention of how they became refugees. Van Gelder, like virtually all liberals in the United States sincerely and rightly laments the hoarding of wealth by the super rich and the subsidies given to destructive (non-war) industries, without ever remarking that all that hoarding is simply dwarfed by public spending on a program of mass murder that makes enemies of 96% of humanity—a program the likes of which has never been seen in any other time or place.

I don’t think local activism can succeed unless it impacts international and national policy, and in large part its activists don’t even intend to do that. Many have declared opposition to the Dakota Access Pipeline an unqualified success as long as the earth-destroying monster is run through someone else’s backyard. Van Gelder asks a local activist what world she envisions, and she says she’s already in it—a testimony to the life-fulfilling nature of activism but also to the propaganda that has so many Americans convinced the status quo is not a fast train to catastrophe. Van Gelder asks another woman doing great work where power comes from, and she replies “It’s when your head, your heart, and your hands are aligned.”

That’s not false, but it’s lacking something. We could have thousands of people with their heads, hearts, and hands aligned and still destroy the climate, launch the nukes, or establish a fascist state. Power, I would say, comes from mobilizing enough people to take the right actions for change, inspiring others to help while dissuading those who would resist. I think local activism is far more a place to start than is generally imagined. I think elections, especially federal elections, have become largely a distraction. I think partisanship and the propaganda of corporate media are powerful poison. But I think viewing local or personal satisfaction as sufficient will be fatal. We need local and global action that understands itself as such. Or we need close collaboration between those who want to stop one pipeline and those who want to stop them all.

We also need to take advantage of new activism that will come from those who will, come January 20th, suddenly object to all sorts of horrible policies they’ve accepted amicably for the past eight years. But we need to nudge such people into a principled nonpartisan frame of reference that will allow their activism to last and succeed.

We should also be looking for ways to empower states and localities, including through secession, and through global activist alliances.

The hopeless wreck of a U.S. government infects the United Nations, of course, through its veto power and permanent membership on the “Security” Council. A reformed global body would undercut the power of its worst abusers, rather than empowering them above all others. In a preferable design, I think, nations with under 100 million population (roughly 187 nations) would have 1 representative per nation. Nations with over 100 million population (currently 13) would have 0 representatives per nation. But each province/state/region in those nations would have 1 representative answering only to that province/state/region.

This body would make decisions by majority vote and have the power to create chairs and committees, hire staff, and by three-quarters majority reshape its own constitution. That constitution would forbid war and participation in the production, possession, or trading of weapons of war. It would commit all members to assisting each other in making the transition to peaceful enterprises. The structure would also forbid violations of the rights of the environment and of future generations, and commit all members to collaborating on environmental protection, poverty reduction, population growth control, and aid to refugees.

This more-useful body for planetary preservation would facilitate education and cultural exchange programs, as well as the training and deployment of unarmed civilian peace workers. It would not create or collaborate with any armed forces, but would apply the rule of law equally and advance restorative justice through mediation and truth-and-reconciliation.

Any member or group of members would have the right to compel a vote on whether to create on a planetary scale any program that the member had itself created and shown capable of advancing disarmament, environmental protection, poverty reduction, population growth control, or assistance to those in need. Other members would be permitted to vote no only if they could establish that such a program had not worked in the province or country proposing it or could not work elsewhere.

Members would each choose their representative to a two-year term through clean, transparent, nonpartisan, and exclusively publicly funded elections open to all adults, verified by the public hand-counting of paper ballots at each polling place, including ranked-choice voting, and including on the ballot and in any debates all candidates qualified by the collection of the signatures of 1% of constituents.

All major meetings and proceedings would be live streamed and archived as video available online, and all votes be recorded votes. Member dues would be assessed based on ability to pay, with deductions for members’ success in meeting the goals of lower military spending (including through a member’s taxes to the nation it is part of), lower carbon emissions, greater equality of wealth, and greater aid to poorer members.

I’d like to see polling, even in the U.S. and other large nations, on public support for that sort of positive proposal.