Will the Gulf of Tonkin Fit into the Red Sea? 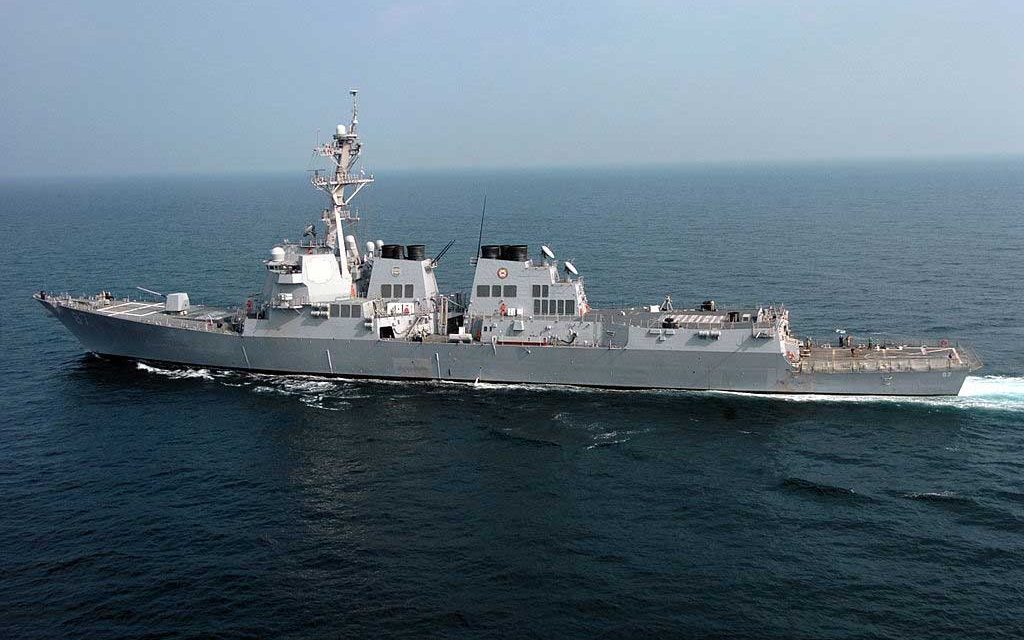 Why it doesn’t matter whether the USS Mason was actually fired upon by Yemenis.

Just a geography question. Or maybe it’s a different sort of question.

Do a web search for “USS Mason” and you will find countless “news” reports about how this poor innocent U.S. ship has been fired upon, and fired upon again, and how it has fired back “countermeasures” in self-defense.

But you might stumble onto one article from CNN (don’t watch the totally misleading video posted just above the text) that says:

“Officials Saturday night were uncertain about what exactly happened, if there were multiple incoming missiles or if there was a malfunction with the radar detection system on the destroyer.”

So, was the poor wittle innocent destroyer fired at or not?

The simple but apparently impossible point to grasp is that it does not matter. The United States destabilized Yemen with a massive killing spree known as a “drone war.” The United States armed Saudi Arabia to bomb Yemen with jets, supplied the jets, supplied the bombs (and cluster bombs), refueled the jets midair, provided the targeting information, provided the cover at the United Nations, and deployed its ships to the coast of Yemen as part of its effort to achieve U.S./Saudi power in Yemen through mass murder and devastation. If one group or another or nobody in Yemen fired some harmless shots at a U.S. ship the outcome is the same: zero legal or moral or practical justification to continue or escalate the killing, and zero logic in calling such escalation “defensive.”

Likewise, speculation—including in the CNN video posted just above its article—that Iran was behind the possibly fictional attacks on the U.S. ship does not matter. The conclusions that can be drawn are identical whether or not such baseless and wishful theories are true.

This is the point of my use of examples of past similar (non)-incidents like the Gulf of Tonkin Non-Incident in my book War Is A Lie. The point is not that because the U.S. military lied about Tonkin it’s likely to be lying again next time (though that’s a fair conclusion). The point is actually completely different. The point is that when you put U.S. ships on the coast of Vietnam and use them to fire on Vietnam, the question of whether anyone ever fires back is not a question of aggression against the United States of America.

Let’s recall what (didn’t) happen on August 4, 1964. U.S. war ships were on the coast of North Vietnam and were engaged in military actions against North Vietnam. So President Lyndon Johnson knew he was lying when he claimed the August 4 (non)-attack was unprovoked. And any ordinary person could have known he was lying without awaiting any classified leaks. One simply had to check to see which coast of the United States the Gulf of Tonkin was on. (Same with the Red Sea.)

But the supposed attack on August 4 was actually, at most, a misreading of U.S. sonar. The ship’s commander cabled the Pentagon claiming to be under attack, and then immediately cabled to say his earlier belief was in doubt and no North Vietnamese ships could be confirmed in the area. President Johnson was not sure there had been any attack when he told the American public there had been. Months later he admitted privately: “For all I know, our navy was just shooting at whales out there.” But by then Johnson had the authorization from Congress for the war he’d wanted. There the parallel breaks down, of course, as President Barack Constitutional Scholar Obama cannot be bothered with Congressional authorizations. Yet he still requires a certain level of public tolerance.

In a 2003 documentary called The Fog of War, Robert McNamara, who had been Secretary of “Defense” at the time of the Tonkin lies, admitted that the August 4 attack did not happen and that there had been serious doubts at the time. He did not mention that on August 6 he had testified in a joint closed session of the Senate Foreign Relations and Armed Services Committees along with Gen. Earl Wheeler. Before the two committees, both men claimed with absolute certainty that the North Vietnamese had attacked on August 4.

McNamara also did not mention that just days after the Tonkin Gulf non-Incident, he had asked the Joint Chiefs of Staff to provide him with a list of further U.S. actions that might provoke North Vietnam. He obtained the list and advocated for those provocations in meetings prior to Johnson’s ordering such actions on September 10. These actions included resuming the same ship patrols and increasing covert operations, and by October ordering ship-to-shore bombardment of radar sites (exactly what the U.S. just did in Yemen).

A 2000-2001 National Security Agency (NSA) report concluded there had been no attack at Tonkin on August 4 and that the NSA had deliberately lied. The Bush Administration did not allow the report to be published until 2005, due to concern that it might interfere with lies being told to get the Afghanistan and Iraq wars started.

On March 8, 1999, Newsweek had published the mother of all lies: “America has not started a war in this century.” No doubt Team Bush thought it best to leave that pretense undisturbed.

When the United States was lied more deeply into the Vietnam War, all but two senators voted for the Gulf of Tonkin resolution. One of the two, Wayne Morse (D-OR), told other senators that he had been told by the Pentagon that the alleged attack by the North Vietnamese had been provoked. Obviously any attack would have been provoked. But the attack itself was fictional, and that’s the point people seem to latch onto, missing the more important understanding that it does not matter.

Senator Morse’s colleagues did not oppose him on the grounds that he was mistaken, however. Instead, a senator told him, “Hell, Wayne, you can’t get into a fight with the president when all the flags are waving and we’re about to go to a national convention. All [President] Lyndon [Johnson] wants is a piece of paper telling him we did right out there, and we support him.”

Hell, Swanson, you can’t raise scruples about blowing people up in Yemen when traitors are failing to stand during the National Anthem and Hillary Clinton took big bucks from Saudi Arabia and Boeing into her family foundation to get those jets there and the Democrats are trying to paint Donald Trump as too dovish.