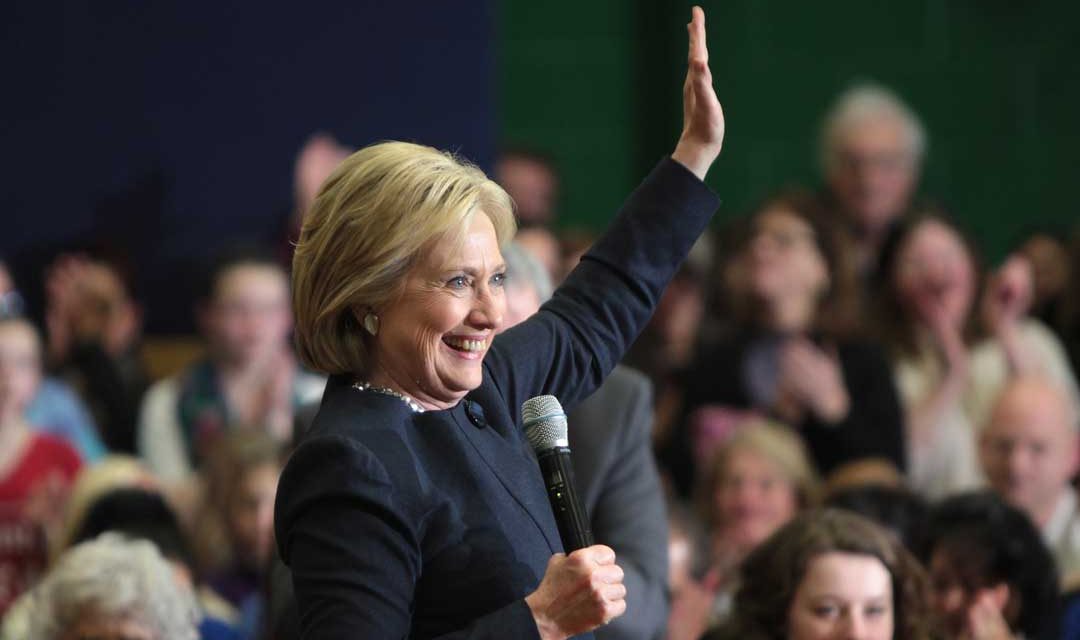 It's fascinating that even the bankers in whom Clinton confides her militarist mania ask her identical questions to those I get asked by peace activists.

At first glance, Hillary Clinton’s speeches to Goldman Sachs, which she refused to show us but WikiLeaks claims to have now produced the texts of, reveal less blatant hypocrisy or abuse than do the texts of various emails also recently revealed. But take a closer look.

Clinton has famously said that she believes in maintaining a public position on each issue that differs from her private position. Which did she provide to Goldman Sachs?

Yes, Clinton does profess her loyalty to corporate trade agreements, but at the time of her remarks she hadn’t yet started (publicly) claiming otherwise.

I think, in fact, that Clinton maintains numerous positions on various issues, and that those she provided to Goldman Sachs were in part her public stances, in part her confidences to co-conspirators, and in part her partisan Democratic case to a room of Republicans as to why they should donate more to her and less to the GOP. This was not the sort of talk she’d have given to labor union executives or human rights professionals or Bernie Sanders delegates. She has a position for every audience.

In the speech transcripts from June 4, 2013, October 29, 2013, and October 19, 2015, Clinton was apparently paid sufficiently to do something she denies most audiences. That is, she took questions that it appears likely she was not secretly briefed on or engaged in negotiations over ahead of time. In part this appears to be the case because some of the questions were lengthy speeches, and in part because her answers were not all the sort of meaningless platitudes that she produces if given time to prepare.

Much of the content of these speeches to U.S. bankers dealt with foreign policy, and virtually all of that with warfare, potential warfare, and opportunities for military-led domination of various regions of the globe. This stuff is more interesting and less insultingly presented than the idiocies spewed out at the public presidential debates. But it also fits an image of U.S. policy that Clinton might have preferred to keep private. Just as nobody advertised that, as emails now show, Wall Street bankers helped pick President Obama’s cabinet, we’re generally discouraged from thinking that wars and foreign bases are intended as services to financial overlords. “I’m representing all of you,” Clinton says to the bankers in reference to her efforts at a meeting in Asia. Sub-Saharan Africa has great potential for U.S. “businesses and entrepreneurs,” she says in reference to U.S. militarism there.

Yet, in these speeches, Clinton projects exactly that approach, accurately or not, on other nations and accuses China of just the sort of thing that her “far left” critics accuse her of all the time, albeit outside the censorship of U.S. corporate media. China, Clinton says, may use hatred of Japan as a means of distracting Chinese people from unpopular and harmful economic policies. China, Clinton says, struggles to maintain civilian control over its military. Hmm. Where else have we seen these problems?

On Syria, Clinton says it’s hard to figure out whom to arm—completely oblivious to any options other than arming somebody. It’s hard, she says, to predict at all what will happen. So, her advice, which she blurts out to a room of bankers, is to wage war in Syria very “covertly.”

In public debates, Clinton demands a “no fly zone” or “no bombing zone” or “safe zone” in Syria, from which to organize a war to overthrow the government. In a speech to Goldman Sachs, however, she blurts out that creating such a zone would require bombing a lot more populated areas than was required in Libya. “You’re going to kill a lot of Syrians,” she admits. She even tries to distance herself from the proposal by referring to “this intervention that people talk about so glibly”—although she, before and at the time of that speech and ever since has been the leading such person.

Clinton also makes clear that Syrian “jihadists” are being funded by Saudi Arabia, UAE, and Qatar. In October 2013, as the U.S. public had rejected bombing Syria, Blankfein asked if the public was now opposed to “interventions”—that clearly being understood as a hurdle to be overcome. Clinton said not to fear. “We’re in a time in Syria,” she said, “where they’re not finished killing each other . . . and maybe you just have to wait and watch it.”

That’s the view of many ill-meaning and many well-meaning people who have been persuaded that the only two choices in foreign policy are bombing people and doing nothing. That clearly is the understanding of the former Secretary of State, whose positions were more hawkish than those of her counterpart at the Pentagon. It’s also reminiscent of Harry Truman’s comment that if the Germans were winning you should help the Russians and vice versa, so that more people would die. That’s not exactly what Clinton said here, but it’s pretty close, and it’s something she would not say in a scripted joint-media-appearance masquerading as a debate. The possibility of disarmament, nonviolent peacework, actual aid on a massive scale, and respectful diplomacy that leaves U.S. influence out of the resulting states is just not on Clinton’s radar no matter who is in her audience.

Goldman Sachs CEO Lloyd Blankfein asks Clinton at one point how a good war against Iran might go—he suggesting that an occupation (yes, they use that forbidden word) might not be the best move. Clinton replies that Iran can just be bombed. Blankfein, rather shockingly, appeals to reality—something Clinton goes on at obnoxious length about elsewhere in these speeches. Has bombing a population into submission ever worked, Blankfein asks. Clinton admits that it has not but suggests that it just might work on Iranians because they are not democratic.

Regarding Egypt, Clinton makes clear her opposition to popular change.

Regarding China again, Clinton claims to have told the Chinese that the United States could claim ownership of the entire Pacific as a result of having “liberated it.” She goes on to claim to have told them that “We discovered Japan for heaven’s sake.” And: “We have proof of having bought [Hawaii].” Really? From whom?

This is ugly stuff, at least as damaging to human lives as the filth coming from Donald Trump. Yet it’s fascinating that even the bankers in whom Clinton confides her militarist mania ask her identical questions to those I get asked by peace activists at speaking events: “Is the U.S. political system completely broken?” “Should we scrap this and go with a parliamentary system?” Et cetera. In part their concern is the supposed gridlock created by differences between the two big parties, whereas my biggest concern is the militarized destruction of people and the environment that never seems to encounter even a slight traffic slowdown in Congress. But if you imagine that the people Bernie Sanders always denounces as taking home all the profits are happy with the status quo, think again. They benefit in certain ways, but they don’t control their monster and it doesn’t make them feel fulfilled.