Ban Ki-moon’s Legacy in Palestine: Failure in Words and Deeds 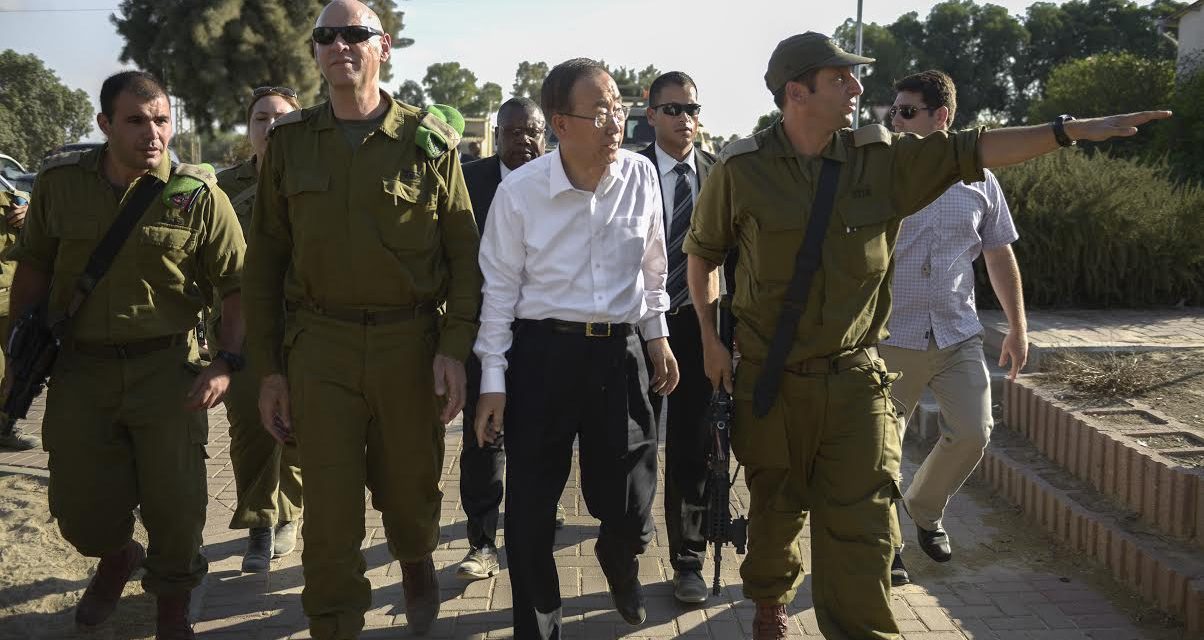 Photo: Ban Ki-moon being given a tour in Israel by senior officials of the Israel Defense Forces (IDF)

Ban Ki-moon was the most ideal man for the job of UN Secretary General, as far as the US government and the Israeli occupation regime are concerned.

Ban Ki-Moon‘s second term as the Secretary General of the United Nations is ending this December. He was the most ideal man for the job as far as the United States and its allies are concerned.

Of course, there will always be other Ban Ki-Moons. In fact, the man himself was a modified version of his predecessor, Kofi Annan.

The unspoken, but unmistakable rule about UN Secretary Generals is that they must come across as affable enough so as not to be the cause of international controversies, but also flexible enough to accommodate the US disproportionate influence over the United Nations, particularly the Security Council.

At the end of their terms, the ‘success‘ or ‘failure‘ of these Secretaries has been largely determined by their willingness to play by the aforementioned rule: Boutros Boutros-Ghali had his fallout with the US, as Kurt Waldheim also did. But both Annan and Ban learned their lessons well and followed the script to the end of their terms.

It would be utterly unfair to pin the blame for the UN‘s unmitigated failure to solve world conflicts or obtain any real global achievement on a single individual. But Ban was particularly ‘good‘ at this job. It would be quite a challenge to produce another with his exact qualities.

It would be utterly unfair to pin the blame for the UN’s unmitigated failure to solve world conflicts or obtain any real global achievement on a single individual. But Ban was particularly ‘good’ at this job.

His admonishment of Israel, for example, can come across as strong-worded and makes for a good media quote, yet his inaction to confront Israel‘s illegal violations of numerous Resolutions passed by the very UN he headed, is unmatched.

Even his purportedly strong words of censure were often cleverly coded, which, ultimately, meant very little.

When Israel carried out its longest and most devastating war on Gaza in the summer of 2014, a large number of international law experts and civil society organizations signed a letter accusing the UN chief of failing to clearly condemn Israel‘s unlawful action in the Occupied Territories, its targeting of civilian homes, and even the bombing of UN facilities, which killed and wounded hundreds.

The signatories included former UN Special Rapporteur, Richard Falk, who, along with the others, called on Ban to either stand for justice or resign. He did neither.

The signatories criticized him, specifically, about Israeli shelling of a school managed by the UN agency for Palestinian refugees (UNRWA), in which ten civilians were killed.

In his ‘condemnation‘ of the Israeli attack earlier, Ban even failed to mention Israel by name as the attacker, and called on ‘both parties‘ to provide protection for Palestinian civilians and UN staff.

“Your statements have been either misleading, because they endorse and further Israeli false versions of facts, or contrary to the provisions established by international law and to the interests of its defenders, or because your words justify Israel’s violations and crimes,” they wrote.

And they were right. This is Ban Ki-Moon’s signature policy—his ability to sidestep having to criticize Israel so cleverly (and, of course, the US and others) when that criticism could have, when needed most, at least given a pause to those who violate international law at will.

Considering this, many have perceived Ban‘s farewell speech at the 71st session of the UN General Assembly on September 15 as a departure from his old reserved self. It was understood that it was the end of his term, and he was ready to show some backbone, however belatedly. Sadly, this was not the case.

“It pains me that this past decade has been lost to peace. Ten years lost to illegal settlement expansion. Ten years lost to intra-Palestinian divide, growing polarization and hopelessness,” he surmised, as if both parties—the occupied and the military occupier—were equally responsible for the bloodshed and that Palestinians are equally blamed for their own military Occupation by Israel.

“This is madness,” he exclaimed. “Replacing a two-state solution with a one-state construct would spell doom: denying Palestinians their freedom and rightful future, and pushing Israel further from its vision of a Jewish democracy towards greater global isolation.”

But again, no solid commitment either way. Who is ‘replacing a two-state solution?’ and why would a ‘one state reality’—which incidentally happened to be the most humane and logical solution to the conflict—‘spell doom’? And why is Ban so keen on the ethnic status of Israel’s ‘Jewish democracy’ vision, considering that it was Israel’s demographic obsession that pushed Palestinians to live under military Occupation or live under perpetual racial discrimination in Israel itself?

The fact is that there is more to Ban’s muddled language than a UN chief who is desperately trying to find the balance in his words, so that he may end his mission without registering any serious controversies, or raise the ire of Israel and the US.

And why is Ban so keen on the ethnic status of Israel’s ‘Jewish democracy’ vision, considering that it was Israel’s demographic obsession that pushed Palestinians to live under military Occupation or live under perpetual racial discrimination in Israel itself?

(Incidentally, Israeli Ambassador to the UN, Danny Danon, still ranted against the UN chief for calling Israel‘s illegal Jewish settlements ‘illegal‘ in his address. Other Israeli commentators raged against him for being a ‘liar’. Strange that even repeating old, irrefutable facts is still a cause of anger in Israel.)

Yet again, this is not the matter of the choice for words. A WikiLeaks document from August 2014 is an excellent case in point.

According to the document released by WikiLeaks, Ban collaborated secretly with the US to undermine a report issued by the UN’s own Board of Inquiry’s report on Israeli bombing of UN schools in Gaza during the war of December 2008—January 2009.

‘Collaborated‘ is actually a soft reference to that event, where Susan Rice—then the White House National Security Adviser—called on him repeatedly to bury the report, not to bring it to the Council for discussion and, eventually, to remove the strongly-phrased recommendations of ‘deeper’ and ‘impartial’ investigations into the bombing of the UN facilities.

When Ban explained to Rice that he was constrained by the fact that the Board of Inquiry is an independent body, she told him to provide a cover letter that practically disowns the recommendations as ones that “exceeded the scope of the terms of reference and (that) no further action is needed.”

When the UN chief is gone, he will be missed—but certainly not by Palestinians in Gaza or refugees in Syria, or war victims in Afghanistan. But by the likes of Susan Rice, whose job was made very easy, when all she needed to do was merely instruct the chief of the largest international organization on earth to do exactly as she wished; and, for him, to gladly do so.

In his last visit to Palestine in June, Ban Ki-Moon told distraught Gazans that the “UN will always be with you.”

As tens of thousands there still stand on the rubble of their own homes, denied freedom to move or rebuild, Ban Ki-Moon’s statement is as forgettable as the man’s legacy at the United Nations.

[Editor’s Note: To learn more about how Ban Ki-moon has been complicit in Israel’s occupation regime, read “Ban Ki-moon’s Complicity in Israel’s Occupation and War Crimes”. Additional information, including about how Ban served the US’s agenda by helping to undermine the UN Board of Inquiry Report, can also be found in the book Obstacle to Peace: The US Role in the Israeli-Palestinian Conflict.]