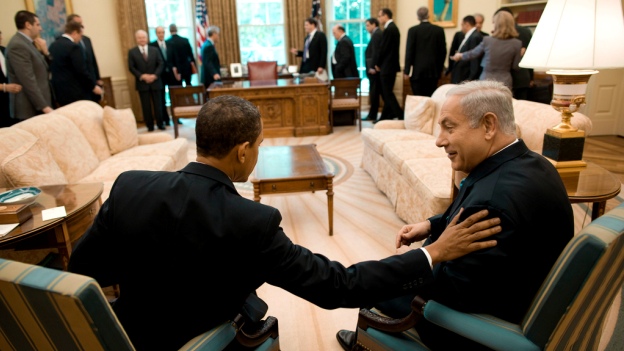 Americans should ask themselves why they should be financing the “largest pledge of U.S. military assistance made to any country.”

After nine months of protracted negotiation, the Obama administration finally signed a ten-year, $38 billion military aid agreement with Israel on September 14. The deal has been explained as both “compensation” to Netanyahu for America’s role in securing the Iran nuclear agreement and as a burnishing of Obama’s legacy for giving the largest aid package ever to Israel. Whatever dubious value those objectives may offer the U.S. taxpayer, there are at least seven reasons why Congress should defund the deal as it comes up in annual appropriation bills.

1. Israel doesn’t deserve a reward. In addressing Congress in 2015 to argue against the Iran nuclear agreement and in spending millions to lobby against the agreement, Prime Minister Netanyahu not only disrespected the U.S. President, but also interfered in American foreign policy. Moreover the nuclear deal, far from increasing Israel’s security risk, has substantially reduced it. The Iranians have dismantled their nuclear facilities and are complying with the agreement. So why the compulsion to compensate Israel?

2. Israel doesn’t need more U.S. arms. Israel already has a vibrant defense industry, which is a major supplier of the Israel Defense Force (IDF). With defense equipment exports totaling $7 billion, including substantial sales to the United States, Israel is the sixth largest arms exporter in the world. In comparison with Iran and other Middle East neighbors, Israel has an overwhelming military superiority. For example, Israel’s defense budget is $15.6 billion; Iran’s is $6.3 billion. According to GlobalFirepower.com, Israel ranks 16th out of 126 countries on the GFP Power Index, as compared with Iran, which ranks 21st. Why does a nation with 10,185 armored fighting vehicles 4,170 tanks 681 aircraft, and 48 attack helicopters need American billions for additional equipment?

4. Israel is likely to use the U.S. arms against Palestinians. Israel has relied on U.S.-supplied arms in its serial wars on Gaza in 2008-2009, 2012 and 2014. Those wars have taken a heavy toll on civilians (including large numbers of women and children). History tells us that such arms are more likely to be used against Palestinians than against Iran or other neighbors. With tensions rising, another war on Gaza looms on the horizon.

5. The arms deal furthers the occupation and the settlements. Since money is fungible, the U.S. grant allows Israel to divert portions of its own military budget to subsidize the illegal settlements. Although the actual budget figures are undisclosed, state subsidies for half a million settlers in the Occupied West Bank must represent a huge claim on the Israeli budget. With the U.S. arms deal, the Israeli government can transfer freed-up defense money to support the settlements.

6. The deal deepens US complicity in the occupation. The unconditional grant of U.S. military aid makes America a full partner in the occupation and, notwithstanding Obama’s futile protests, reflects tacit approval of the expanding settlements. If our President were serious about securing Palestinian rights, he would have so conditioned the arms pact on Israeli steps toward peace.

7. The U.S. could better use the $38 billion for its domestic purposes. Aren’t there more urgent domestic uses for the Israel arms money? Don’t we need those funds to upgrade our crumbling infrastructure, create educational opportunities and expand health care for our poor and middle class?

The U.S. Congress (most of whose members receive substantial contributions from the Israel lobby) is unlikely to balk in approving the annual grants due under the agreement with Israel. Yet a groundswell of popular opposition to the deal could cause some Members to shift away from their uncritical support of a regime that violates international law in its oppression of the Palestinians. Americans should ask themselves why they should be financing the “largest pledge of U.S. military assistance made to any country.”