The Libertarian Case for Palestine

Jeremy R. Hammond presents the Libertarian case for Palestine in a debate on the Tom Woods Show over the legitimacy of the establishment of Israel.

“Israel was founded on the basis of legitimate homesteading of land and reclamation of lost Jewish property from previous generations of Jews.”

That was the resolution I argued against in my debate this week on the Tom Woods Show. Arguing in favor was Rafi Farber, one of the authors of the recent paper, “The Legal Status of the State of Israel: A Libertarian Approach”, published in the Indonesian Journal of International Law.

Rafi’s main argument is that when the “Jewish state” of Israel was established in 1948, the Jews were the rightful owners of the land of historic Palestine (today Israel and the Palestinian territories of the West Bank and Gaza Strip) based on their occupancy of the land 2,000 years ago.

I show that argument fails even on their own terms as presented in their paper.

Rafi and his coauthors attempt in their paper to deny the ethnic cleansing in their paper, but argue that even if Palestine was ethnically cleansed, this was legitimate since the land really belonged to the Jews. This is essentially also the argument Rafi presents during on the show.

I posit, on the other hand, that the ethnic cleansing of the Arab population by which Israel came into being was incompatible with Libertarianism, and, specifically, the principle of non-aggression.

If you enjoy what I have to say in the debate, you’ll definitely want to check out my books Obstacle to Peace: The US Role in the Israeli-Palestinian Conflict (2016) and The Rejection of Palestinian Self-Determination: The Struggle for Palestine and the Roots of the Arab-Israeli Conflict (2009). (And, particularly for you Libertarians of the Austrian economics persuasion, don’t forget Ron Paul vs. Paul Krugman: Austrian vs. Keynesian Economics in the Financial Crisis!)

Want to learn more about Libertarianism, learn history and economics they didn’t teach you in school, and get all 3 of my of my books completely free? Check out Tom Woods’ Liberty Classroom! Sign up for a membership through my affiliate page and I’ll sweeten the deal for you by throwing in my books. (And if you know anyone else who might be interested, tell them, too!) 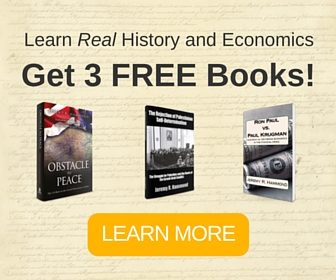