Book Review: ‘Mission Failure: America and the World in the Post-Cold War Era’

Mandelbaum’s Mission Failure is a failed mission that appeals to readers' ignorance about the true nature of US foreign policy.

If the reader is looking for the ‘indispensable’ nation and its ‘exceptionalism’, this is the book for you. Michael Mandelbaum, whose credentials include a PhD in Political Science from Harvard (which speaks volumes about initial bias in itself) and writes in association with another true believer—Thomas Friedman of the New York Times—wrote Mission Failure as an acknowledgement that U.S. foreign policy has failed in some areas, but not because it was their fault. The ‘fault’ lines I have to qualify, as he does accept blame for NATO’s expansion eastward as a mistake, but counters as if it is the dictatorship and aggressiveness of Russia that truly mattered. 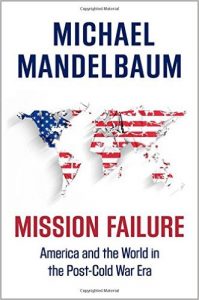 It is, essentially, the mainstream media message concerning the United States and current events mainly from the Clinton era through to the Russian “invasion” of Ukraine. The arguments presented have many faults that anyone reading alternate materials—rather than those derived from CNN, FOX, or any other U.S. corporate based media production—could recognize.

The big one, the mind numbing one, the oft-reiterated one (as if the Big Lie, when told often enough, becomes the truth) is that U.S. intentions are always good, and that all that was intended was to establish democracy and freedom throughout the world. Fine and noble sentiments but essentially all rhetoric and hubris covering over the quest for global hegemony for other ignored reasons.

The work starts with China and Russia, then transfers over to the Middle East, then returns to China and Russia at the end. The mission in China was human rights, followed by capitalism leading towards democracy (always the conflation of the decidedly non-democratic structures of capitalism with the promotion of democracy—probably taught at Harvard poli-sci). In China the policy failed “Because the United States did not have the power to enforce it.” Well of course, China has nuclear weapons and would use them to defend itself—as well as owning a large segment of U.S. debt and harboring many U.S. corporate endeavors.

With Russia the writing concerns its opening up under Yeltsin and then its aggressive, hostile and non-democratic stance under the evil Putin. In reference to NATO, Mandelbaum establishes his only realistic acceptance of U.S. screw-ups. “Russia accepted NATO expansion because it had no choice [short of nuclear war],” and “for no gain at all” the “NATO expansion [was] one of the greatest blunders in the history of American foreign policy.”

After reading the first parts of the book I had almost given up and decided it was not worth reading, but after this statement I continued on. There was no redemption. The writing continued in its very narrow sighted scope of interpretation (very similar in style to Friedman’s) with the fault for the problems always being the other guy.

It is not worth referencing many of the canards, dissimulations, conflations, and outright lies that abound in the book. What is noteworthy, as usual, is what is not presented.

Mandelbaum does discuss briefly the Washington consensus institutions such as the IMF, WTO, World Bank, et al, but never digs deep enough to consider that they are an essential part of the U.S. corporate/military drive towards global hegemony (recall Friedman’s “hidden glove” of the military protecting U.S. interests abroad—at least he had that part right). That need/desire for power comes from these institutions doing their best to protect the sanctity of the US dollar as the global fiat reserve currency. There is no discussion of this and its relationship with the Saudis and that the global trade in oil—regarding the petrodollar—is done via the US dollar.

Nor is there any mention of the ideas presented in John Perkins’ Confessions of an Economic Hitman (Berrett-Koehler Publishers (Nov. 9 2004)) concerning how these institutions attempted and mostly succeeded into bringing many countries into the world of debt (and thus control) being owed to the central monetary powers of the west (and such “western interests” as frequently stated by Mandelbaum without truly being defined). Another good read along this line should be Michael Hudson’s Killing the Host (CounterPunch, August 26, 2015) that outlines how the current financial structures supercede sovereignty and control the countries of the world through debt obligations. Naomi Klein’s The Shock Doctrine (Vintage/Random House, 2007) examines the highly predatory negative impacts of corporate/financial doctrines around the world.

In other words, “western interests” are very poorly aligned with freedom and democracy and much more in tune with corporate/military/political hegemony for the ruling small percentage of those in power generally behind the scenes.

Mandelbaum’s writing concerning the greater Middle East takes a different angle. For this large area the main problem is the backwardness, the clannish nature, the religious differences, and the tribalism that permeates the region. I will always find it ironic that many western writers deride Arab tribalism when Michael Oren, former ambassador to the U.S., takes pride in his Jewish “tribe.”

This of course makes the Arabs unsuitable for the noble quest of national reform towards democracy and free markets. What is not discussed is, partly as above, the quest for global dollar hegemony based on the petrodollar.

But here it spreads out into a denial of anything critical of Israel. Perhaps Mandelbaum does not wish to lose his tenure or withstand any criticism about what could be criticized about Israel, but he accepts wholeheartedly the mainstream Israeli narrative about the country being the only democracy in the Middle East. There is little discussion of the historical setting for Israel and what is presented is a conflation implying causation (e.g. the UN Partition Plan idea, being followed by a statement about Israel fighting for independence as if the former was a legal basis for the latter—which it isn’t).

As always in similar indispensable/exceptional discourses, Israel is a democracy and a “shining light” for the region. The history of settler-colonialism is not discussed, nor its ongoing patterns of settlement and repression within the remnant Palestinian territories. And as always Hamas is the super bad guy that won the election but then attacked Fatah to retain the Gaza strip as their domain. More lies, more dissimulation of Israeli and US activities.

Also within this context, the main discussion for Mandelbaum focuses on the so called “peace process” as a US foreign policy failure, but again only because the Arabs were a recalcitrant, reluctant, tribal bunch of ignorant people not ready for democracy and freedom. What is missing of course is the whole history of colonial conquests from the Ottomans through to the European divisions of the area into areas of interest and influence, setting the stage for many of today’s problems in the region.

A wide set of readings that discusses the true situation in the Middle East should include anything by Ilan Pappe, Neve Gordon, Jonathan Cook, Robert Fisk, Miko Peled, Tanya Rinehart, Noam Chomsky among many others.

Another large miss in this work is the lack of any look at U.S. covert operations, either through the CIA/NSA networks or through various NGO networks of the kind funded by George Soros. These covert actions are global and range from military actions to staged protests and economic influence peddling. Further reading in this area should include Brzezinski’s The Grand Chessboard ( Basic Books, September 18, 1998) outlining a plan for global domination by the U.S. More reading should include something from the Project for a New American Century, “Rebuilding America’s Defenses,” written by a variety of neocons/pro-Israeli chicken hawks that included expectations of a “new Pearl Harbor”.

There are many other authors that discuss and highlight U.S. intentions for ‘full spectrum dominance’ within a new “pax Americana,” Andrew J. Bacevich being one of the more authoritative, with several books on the “American empire” in print.

The “new Pearl Harbor” did happen after all, 9/11. Mandelbaum accepts the official version of the story wherein a bunch of tribal misfits managed to defeat all security measures surrounding the Pentagon, and all flight security measures in order to fly planes into two World Trade Center towers. Mandelbaum, as with many others, writes about two towers “falling”, but says nothing of the third tower that ‘fell’ that day, nor anything about the evacuation of the Saudis on the first no-fly day. Interesting how those tribal Saudi’s seem capable of avoiding U.S. scrutiny ever since Roosevelt visited King Abdul Aziz on the U.S. cruiser USS Quincy in 1945.

All of the Above

When examining U.S. global enterprises, all of the above considerations need and must to come into consideration. Global currency/economic policies, military overt and covert operations, political determinations of global dominance, the historical context of empirical projects, sequestering of resources, the power of the elites: all need to be considered as warp and woof of the same fabric—U.S. global domination and supremacy.

Democracy and freedom make wonderful domestic fodder, and are good mainstream media fodder for foreign governments fallen into a state of sycophancy towards the U.S. (the “western interests”). The reality behind U.S. failures stems not from a rejection of these ideas in particular, but in a rejection of the U.S. as a global militarized hegemon. Democracy and freedom cannot arrive from the barrel of a gun or from the pork-barrel of the Washington consensus.

Mandelbaum’s Mission Failure is a failed mission. To those only familiar with mainstream news, and/or those who are looking for quotable quotes to represent their preconceived notions of U.S. supremacy, this would be a good read. If after this you decide to read it, then try also the other authors indicated (and there are many more) for—not a “balanced” picture, as that is a mainstream meme—for a critical, analytical, and much more accurate view of the imperial hegemon.

Summary Mandelbaum’s Mission Failure is a failed mission that appeals to readers' ignorance about the true nature of US foreign policy.