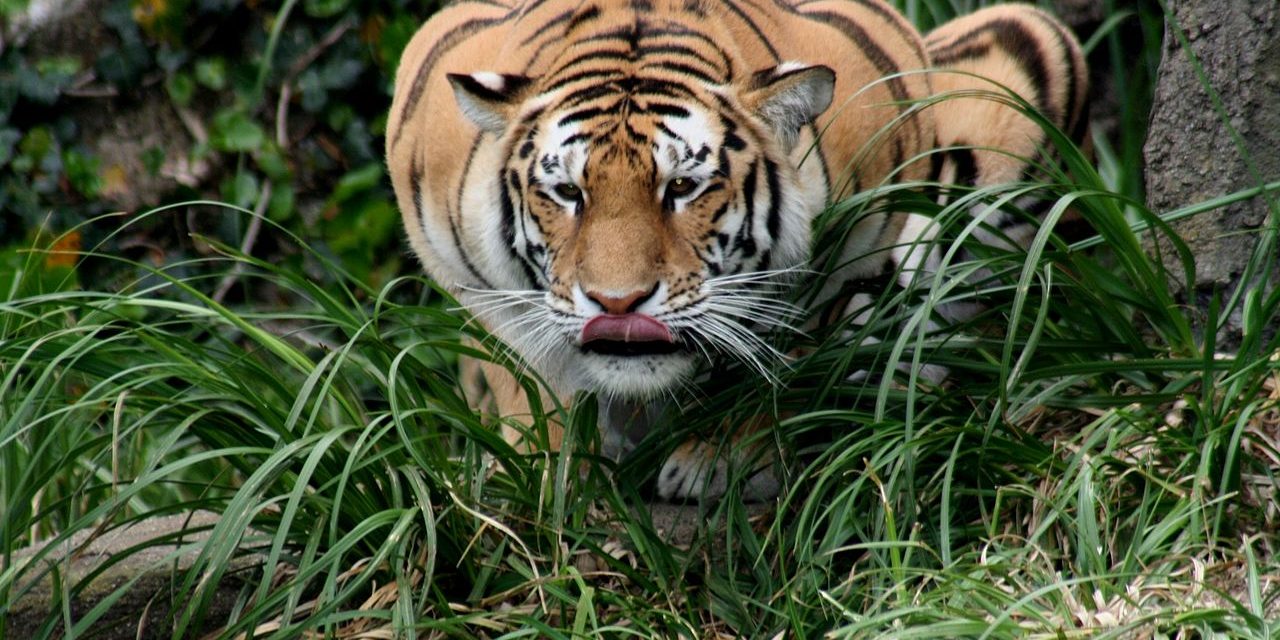 What we are witnessing is the irresponsibility of the human race, a Satan-cursed form of life that does not belong on the beautiful planet Earth.

The World Wildlife Fund tells us that there are only 3,890 tigers left in the entire world. Due to exploitative capitalism, which destroys the environment in behalf of short-term profits, the habitat for tigers is rapidly disappearing. The environmental destruction, together with hunting or poaching by those who regard it as manly or profitable to kill a magnificent animal, is leading to the rapid extermination of this beautiful animal. Soon tigers will only exist as exhibits in zoos.

What we are witnessing is the irresponsibility of the human race, a Satan-cursed form of life that does not belong on the beautiful planet Earth. The cursed humans are even capable of launching a nuclear war which would destroy the livability of Earth.

God made a mistake when he gave to humans, infected as they are with evil, jurisdiction over Earth. He should have given jurisdiction to animals. Consider what humans do to animals. For example, Defenders of Wildlife report that the corrupt state of Alaska is currently slaughtering wolves and grizzly bears so that the state can sell more hunting permits to hunters to slaughter moose. Every moose taken by a wolf pack or a grizzly is not there to be murdered by a hunter. So the state is killing off the predators that reduce its hunting license fees.

Quail hunters want the bobcats killed so that hunters can shoot more birds. The New Hampshire Fish and Game Department voted to establish a hunting and trapping season for bobcats but had to overturn its decision when it became clear that the endangered lynx would be caught in the same traps. Humans regard animals as worthy of protection only when they are on the verge of extinction.

Murder and death appeal to Americans and not only to hunters. How many Americans do you know who are distressed by their government’s murder, maiming, and dislocation of millions of Muslims in seven countries over the past 15 years?

A few years ago there was a scandal involving a NBA star who was a patron of dog fights in which Americans brought dogs to kill or be killed. Americans attend cock fights in which roosters kill or die. The British enjoyed fights to the death between bears and dogs and bred a special dog to fight the bears. The Spanish like to see the death of the bull or of the bullfighter. The blood sport of the Roman Colosseum is very much a part of the human race.

Badly raised little boys tie cans to the tails of dogs and cats and laugh as the terrified animals run, often to their death under the wheels of cars.

Sometimes I go to a gun club with a friend to shoot at paper targets. On one occasion our concentration was disturbed by bursts from a superweapon. I watched the person flinch each time he shot. I suggested that he needed a less powerful weapon with which to practice.

If only, he said. His son had gone to Africa and paid $25,000 to murder a lion. The son had pressured the father to live up to his feat, and the father was adding bruises to his shoulder every time he fired a round of the .375 H&H Magnum. He began to flinch when he pulled the trigger, and his aim was worse by the shot.

He said that he was trying to sight-in the rifle. I offered to do that for him so that the rest of us could go about our business of eye-hand coordination. Observing our disapproving looks, he blurted out that he didn’t really want to shoot a lion, but that his friends and his son were enculturated into a hunting culture in which killing animals was proof of manhood. He felt that he had to do it in order to be accepted.

Then he described the process by which the great lion hunter killed the dangerous beast.

First, he said, you shoot a hippo. Then parts of the dead animal are hung as bait on posts a mere 60 yards from a 20-foot high platform where there are gun rests in the event you are unable to shoulder your own rifle for a shot at such a large animal as a lion a mere 60 yards away. And if you miss, the Great White Hunter guide shoots and you can claim the victory over the dangerous beast.

I remarked that he didn’t seem inclined to participate in this fake hunting scenario. He said that he wasn’t but that he had paid his $25,000. I suggested that he cancel the trip and consider the 25K as the cost of avoiding the shame of participating in cowardly murder.

Elephants are magnificent creatures. Their intelligence is higher than many humans, and their life span, if they are not murdered, can be longer than the human life span. Yet elephants are being murdered at astonishing rates. Nick Brandt documents with his photographs, Across the Ravaged Land, the disappearing animals of East Africa.

The Guardian, a once strong but today weak and Washington-intimidated UK newspaper, reports that in 2014 20,000 African Elephants were killed by poachers. Tanzania and Mozambique have lost over half of their elephant populations with the same devastation of elephants across east and central Africa.

Faced with the extermination of elephants, what did the corrupt European Union do? The EU refused a ban on Ivory trade! The ban might interfere with capitalist profits.

Free market ideologues have concocted a theory that the way to save animals is to make it profitable to kill them. Therefore, people raise the animals to be killed by hunters. In other words, animals only exist for the pleasure of humans to kill them.

What we are left with is a “western civilization” that is no longer a civilization but an existential threat to all life on Earth. Obama has announced a one trillion dollar US nuclear modernization program. This huge sum, spent for death, could instead be spent for life. It is enough money to fund many large and well protected wildlife preserves around the world.

The evil represented by nuclear weapons is inconsistent with the continued existence of life on Earth. Washington, crazed by desire for hegemony over others, is recklessly courting war between nuclear powers. Only Putin among world leaders warns that Washington is setting an unpromising course for everyone.

Yet regardless of all fact, deluded Americans still regard themselves as the salt of the earth, the “exceptional people,” the “indispensable people.” If this delusion is incurable, humans will murder Earth.