The Genocide of a Land

Some scholars still produce serious and informative books on critical issues. One such book is Jeremy R. Hammond's Obstacle to Peace. 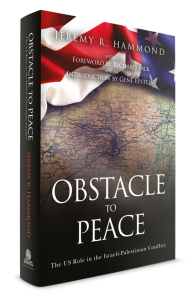 In our days of darkness, spreading ignorance, and absence of serious debate in public forums, we can take hope from the fact that some scholars still produce serious and informative books on the most critical issues of our time. If in the future policymakers again seek the guidance of truth, they will have the information at hand. One such book of truth is Jeremy R. Hammond’s just published Obstacle to Peace, a closely reasoned, heavily documented (68 pages of footnotes), fully indexed, readable book with a Foreword by Richard Falk, an Introduction by Gene Epstein, and an endorsement by Noam Chomsky.

The obstacle to peace is the United States government, which has consistently opposed the entire world’s decades long effort to stop the Zionist genocide of a land called Palestine.

Palestine is a stolen and oppressed land. Israel’s greatest leaders themselves acknowledge the fact. Tom Are quotes David Ben-Gurion:

“If I were an Arab leader, I would never make terms with Israel. That is natural, we have taken their country. Sure God promised it to us, but what does that matter to them? Our God is not theirs. We came from Israel, it’s true, but that was two thousand years ago, and what is that to them? There has been anti-Semitism, the Nazis, Auschwitz, but was that their fault? They only see one thing: we have come and stolen their country. Why should they accept that?”

What once was a country consists today of a few small isolated Palestinian ghettos in the West Bank surrounded by Israeli settlements and an open air prison known as Gaza. Periodically Israel launches military assaults on the civilian population of Gaza, destroying the lives of the people and the infrastructure of the prison camp.

Israel then prevents outside efforts from sending supplies to the suffering people in Gaza. “Freedom flotillas” crewed by Nobel Laurates, present and former members of US and European legislative bodies, and even members of the Israeli Knesset set sail with supplies for Gaza and are pirated and captured in international waters by the Israeli Navy, which, as a warning to others, kills some of the delegation in “self-defense.” The United States steadfastly defends Israel’s criminal behavior with its UN veto, and other governments, though disapproving, are unwilling to confront Washington and force a change.

Washington’s 21st century wars in the Middle East were initiated by neoconservative regimes whose principal policymakers are tightly allied with Israel. The wars focused on Arab nations—Iraq, Libya, and Syria—that were supportive of the Palestinians and had foreign policies independent of Washington. Washington succeeded in destroying two of the countries and has not given up on destroying Syria despite the risk of confrontation with Russia.

The risks that Washington is imposing on Americans and Europeans in order to advance Israeli expansion in the Middle East are horrific. Zionists claim a “greater Israel” from the Nile to the Euphrates. Washington’s wars in the Middle East are designed to remove obstacles to “greater Israel.” For example, on past occasions Israel has attempted to seize southern Lebanon for the water resources, but were driven out by Hezbollah, a militia supplied by Syria and Iran. This is one reason Syria and Iran are on Washington’s target list.

To achieve its or Israel’s goals, Washington uses jihadists. Russia sees the jihadists as threats that could spread to the Muslim areas of the Russian Federation, and Russia acts to protect itself. China also has realized that its province bordering Kazakhstan is subject to jihadist destabilization and appears to be aligning with Russia, Iran, and Syria against Washington’s effort to overthrow the Syrian government and install in its place chaos as Washington has done in Iraq and Libya, thus removing another constraint on Israel’s expansion and the restraint of a secular Syrian government on jihadism.

To get all of this from Hammond, you might have to connect some dots. But what you will get is a massive amount of verbatim dialogue that documents beyond all doubt the conspiracy between Israel, Washington, and the US presstitutes to get rid of “the Palestinian problem” by getting rid of Palestinians.

What does emerge strongly from Hammond’s book is that justice is not a thriving characteristic of the Israeli government, US foreign policy, or the media. The United Nations has produced report after report documenting the extermination of a people, but is powerless to act because of Washington’s veto.

What has happened to Palestinians is a replay of what happened to the native inhabitants of North America and Australia. Palestinians have been dispossessed and murdered. For this crime, the United States shares responsibility with Israel.

Become informed while you still can. Propaganda is turning truth-tellers into “conspiracy theorists” and “domestic extremists.” We can’t take the continued presence of truth-tellers for granted. When one appears support him or her. Order Hammond’s book here: www.obstacletopeace.com.

You will never regret being informed.