An Armenian American Group Caves in to the Anti-Defamation League 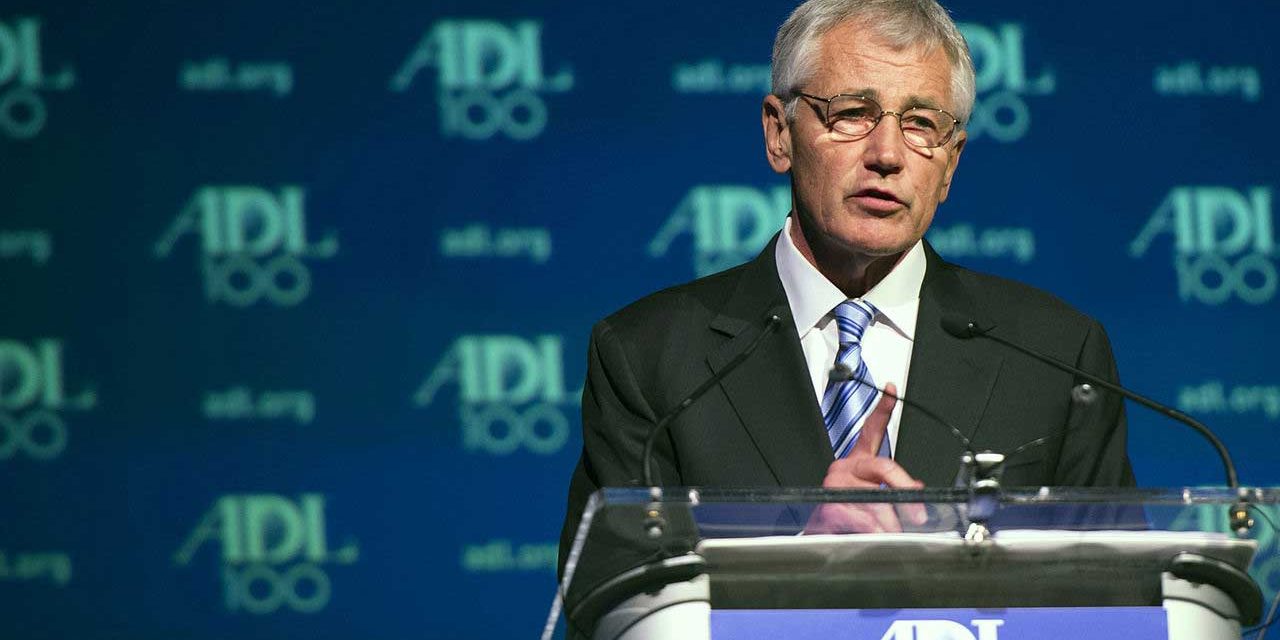 Then US Secretary of Defense Chuck Hagel speaks at the centennial dinner for the Anti-Defamation League in New York, N.Y., on Oct 31, 2013. (Erin A. Kirk-Cuomo/DOD)

The ADL’s hypocrisy on the matter of the Armenian genocide is breathtaking.

For several decades, the Anti-Defamation League (ADL) and other leading Jewish American organizations (AIPAC, AJC, B’nai B’rith, and JINSA) have deliberately colluded with Turkey and Israel to defeat U.S. Congressional resolutions on the Christian Armenian Genocide and to diminish the factuality of that genocide.

Yola Habif Johnston, a director at JINSA (Jewish Institute for National Security Affairs), once admitted that “the Jewish lobby has quite actively supported Turkey in their efforts to prevent the so-called Armenian genocide resolution from passing.”

The hypocrisy is breathtaking given these organizations’ loud, endless demands for recognition of, and legislation on, the Jewish Holocaust.

Starting in 2007, Armenian Americans in Massachusetts and elsewhere made international news by exposing the national ADL’s hypocrisy. In disgust, 13 Massachusetts cities and the umbrella Massachusetts Municipal Association kicked out the ADL’s alleged anti-bias program, “No Place for Hate.” Human rights advocates and many honest Jews supported those efforts. The Turkish government raged that its collaboration with Israel, the ADL, and other Holocaust hypocrites had been blown wide-open.

But in mid-May, a small group of Armenian Americans in Massachusetts—including the politically ambitious Sheriff of Middlesex County Peter Koutoujian and a few members of the Armenian Assembly of America (AAA) and the Armenian National Committee of America (ANCA)—struck a horrible “deal” with the two-faced ADL.

For his part of the “deal,” ADL National Director Jonathan Greenblatt casually “blogged” that his organization now “unequivocally” acknowledges the Armenian Genocide and “would support” (not “do support”) American recognition of that genocide.

Even Andrew Tarsy, former Director of the New England ADL, termed the pact “inadequate.”  The ADL “ought to lead the conversation about reparations for these [Armenian] families … assets, land … everything that Holocaust reparations … has represented should be on the table.”

Of the many things wrong with this “deal,” let’s list a few.

Armenian Americans won a major victory in 2014 when Attorney Joseph Berman, an ADL National Commissioner, lost his bid to become a Massachusetts Superior Court judge. Governor Deval Patrick had nominated him in 2013. I testified against Berman.

Following a widely publicized fight, the eight elected Governor’s Councilors refused to confirm Berman. His leadership position in the hypocritical ADL was one reason why Councilors opposed him.

While I was in close touch with several Councilors, an incident occurred that has never before been made public.

A Councilor who opposed Berman told me of receiving several calls asking that the Councilor vote for Berman. One such caller was Sheriff Peter Koutoujian, an Armenian American prominent in the recent ADL “deal.” I remain deeply troubled by that call. Why would Koutoujian do such a thing? I think I know, but only Koutoujian can answer that question. He did not return my recent call asking about his past activities in the campaign against the ADL.

The final Council vote on Berman was 4 to 4. Had the Councilor voted as Koutoujian asked, the ADL’s candidate and the ADL would have triumphed, and Armenian activists would have been defeated.

That and other significant incidents raise questions as to whether the recent ADL “deal” was negotiated in the tough, adversarial way required to defend Armenian interests.

When a few activists and I launched the battle against the ADL in July 2007 and events were moving quickly, AAA and ANCA initially delayed even issuing a statement. Perhaps they were concerned about retaliation or being called anti-Jewish.

The following year, moreover, several activists and I became convinced that these organizations were not fully committed to the ADL fight. At one point, we were told that at least one of the organizations would no longer try to convince cities to sever ties with the ADL.

In 2015, even the NoPlaceForDenial.com website, an essential news resource maintained by ANCA persons, disappeared. It reappeared after I persisted in complaining about its removal.

Indeed, the ADL came under renewed pressure months ago only because I informed ANCA and a pro-AAA person that Newton, MA had, perhaps unintentionally, invited in the ADL after having booted it out in 2007.

Sheriff Koutoujian himself has long been very close to various Jewish organizations. He once received an award from the Jewish Community Relations Council of Greater Boston. He has taken two trips to Israel. The second one, last year, concerned “counter-terrorism.” It was organized by the ADL and funded by Israel’s Gal Foundation, which sponsors ADL programs. Of the 14 Massachusetts law enforcement personnel on the trip, Koutoujian was the only sheriff. Koutoujian later co-narrated a slideshow of the trip at a synagogue in Burlington, MA. Koutoujian has also spoken at other Jewish venues.

He recently wrote this on his Facebook page: “Thank you to the ADL and the Boston Globe for recognizing this terrible moment [Armenian Genocide] for what it is.” So after three decades of the ADL’s conspiring with Turkey to abuse Armenians, defeat Armenian Genocide resolutions, and damage the cause of genocide prevention, the ADL is thanked and all is forgiven, while hundreds of Armenian American activists get no thanks whatsoever? Incredible.

It’s well known that Americans often interact with powerful Jewish American political organizations in two related ways. First, a person may hesitate to publicly disagree with such organizations due to concern about retaliation and being labeled anti-Jewish. On the other hand, being friendly and deferential to these organizations may advance one’s career in politics, academia, business, and other endeavors.

This question must be asked: Could these two types of interactions have adversely affected the post-2007 Armenian American campaign against, and the recent “deal” with, the ADL?

The ADL has an appalling anti-Armenian record. Despite this, recent stories about the “deal” in the Boston Globe and an Armenian American newspaper depicted the ADL as now somehow virtuous. Neither told readers about the ADL’s three decades of hypocrisy and collusion with Turkey.

The ADL claims to be “the nation’s premier civil rights/human relations agency [which] protects civil rights for all.” What nonsense. If that were so it would never have been in the business of covering up genocide. Nor can acknowledging the Armenian Genocide magically now make the ADL a human rights organization. Indeed, the Armenian issue is just one of many that have unmasked the ADL.

The ADL, therefore, is not about civil or human rights. It’s just a Jewish political organization. For instance, it lobbied for an oil pipeline from Azerbaijan to Turkey. Human rights organizations don’t do that sort of thing.

What about nice-sounding ADL programs such as “No Place for Hate,” “World of Difference,” and “Combatting Bullying”? They’re covers. The ADL uses them to penetrate schools, colleges, corporations, and communities to enhance its visibility and political influence.

So that’s the organization that some Armenian Americans just made a “deal” with—a deal that was fatally flawed from the day it was conceived. True human rights advocates and perceptive Armenians reject it.