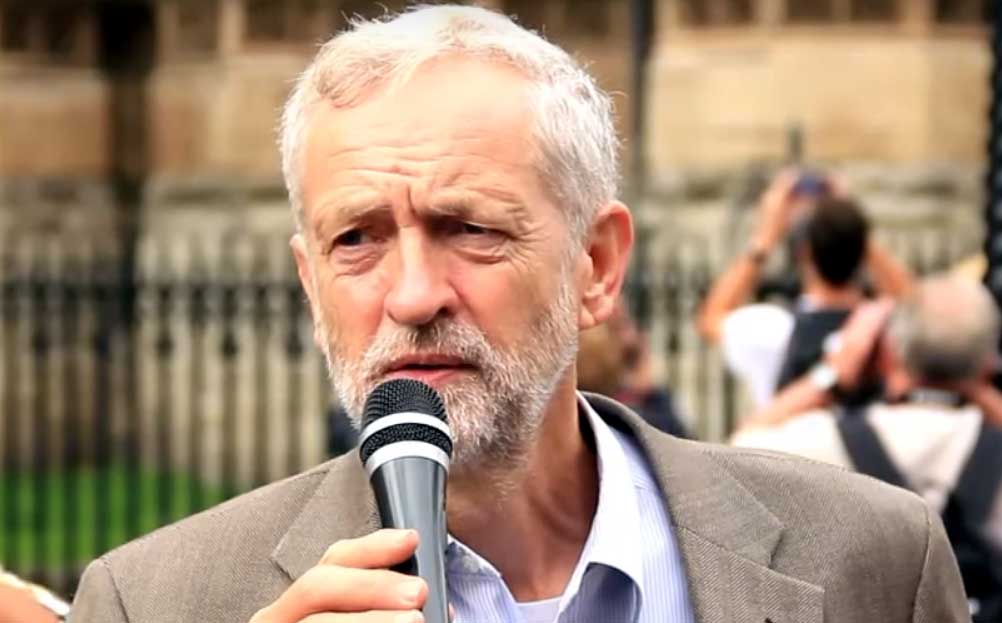 Jeremy Corbyn speaking outside parliament about Bahrain, September 12, 2013 (RevolutionBahrain/licensed under CC BY 3.0)

Criticizing violent political movements and the behavior of any state that violates international law and human rights is a moral duty.

There is a witch-hunt in the British Labor Party. Britain’s Opposition party leader, Jeremy Corbyn, is being hounded for not rooting out alleged anti-Semitism in his party. Those leading the charge are pro-Israel Zionists and their supporters within the party, members who are mostly allied with the former Prime Minister, the largely discredited pro-war Tony Blair. The Blairites are quite unhappy that Corbyn, who won the party’s leadership election last September with a landslide victory is a non-elitist politician, with a deep-rooted grassroots activist past, and, yes, a strong stance for Palestinian rights.

Corbyn has been subjected to all sorts of attacks and ridicule from his own party, many members of which have been busy plotting to push him out, but remained hesitant because of his popular appeal. The Labor party had, in fact, lost much of its credibility since the days of Blair’s ‘New Labor’ and following the US lead in waging an immoral and illegal war on Iraq. Blair’s supporters changed the priorities of the party, which was ‘labor’ by name only. Corbyn’s advent galvanized young people around fresh ideals, and renewed the shaky faith of the party’s traditional supporters.

But since he became a leader, the man’s agenda of anti-corruption and greater equality in Britain has been slowed down, or even entirely halted, by some most bizarre controversies. He was attacked over such things as his supposed poor sense of fashion, his alleged lack of patriotism, and more. The attacks have been so ridiculous, yet omnipresent, that they became the subject of popular memes and much satire.

And when it all failed, he was hit with another manufactured controversy, that of alleged anti-Semitism within his own party. The recent attacks have been the most organized, yet. They involve Israel supporters, British politicians, the media and other sources.

The media has tried to paint him as an embattled leader who is not able to control the uncontainable Jewish hate oozing from his party members.

British Chief Rabbi, Ephraim Mirvis, known for his strong support of Israel joined the fray, charging that the lid has been lifted on bigotry within Labor and that investigation into anti-Semitism must be more than a ‘sticker plaster.’

The investigation and the preceding outcry of anti-Semitism, however, targeted those who were critical of Israel, not Jews, in general, or Judaism. Former London Mayor, Ken Livingstone, who was suspended from Labor for suggesting links between the Nazi party and early Zionists, was not making any reference to Jews per se, and certainly not to Judaism. Arguably, if he was wrong, then it is a mere question of history, not race.

In its coverage of the controversy, even the BBC, delinks both concepts: “Anti-Semitism is ‘hostility and prejudice directed against Jewish people’“, while “Zionism refers to the movement to create a Jewish state in the Middle East.”

Indeed, the first is a racist ideology, while the latter is an entirely political and historical question, especially since early Zionists were largely atheists. Israel’s Zionist-Jewish contradiction was phrased skillfully by Israeli historian, Ilan Pappe, when he wrote:

“The secular Jews who founded the Zionist movement wanted paradoxically both to secularize Jewish life and to use the Bible as a justification for colonizing Palestine; in other words, they did not believe in God but He, nonetheless, promised them Palestine.”

But the Rabbi, and many of those who unscrupulously joined the charge against Labor pretend that Zionism, a late 19th century political movement is the same as Judaism, a religion that dates back millennia.

However, there is nothing new here, and the manufactured ‘controversy’ is hardly limited to Britain or the Labor Party.

The message that Israeli hasbara (propaganda) has been steadily sending to its critics since the establishment of Israel over the ruins of the Palestinian homeland in May 1948: if you are critical of Israel, however slightly, you are a certified anti-Semite. If it happens that you are Jewish, then you are a self-hating Jew, and if you are an Arab, you must abandon the idea that you are, yourself, Semitic and Arab, by merely opposing Israel’s ethnic-cleansing of Palestinians who are all anti-Semites, anyway.

I doubt there is a self-respecting Palestinian intellectual who has not fended against accusations of being anti-Semitic for merely advocating Palestinian rights, and demanding accountability of Israeli violations of human rights and war crimes.

Many independent Jewish voices, too, have found themselves on the defensive, although within a different category. The classification of a ‘self-hating Jew’ has been ever so popular these days, especially as many Jewish activists have righteously joined the Palestinian Boycott, Divestment and Sanctions Movement (BDS). The once-marginalized voices are now a large and growing crowd.

Unable to defend Israeli action based on logical arguments, international law or common sense, Israel’s supporters use other means, threats, smears and vilifications, and also by fabricating non-existing controversies. And no one is immune.

Daniel Greenfield engaged in a bizarre diatribe in the Jewish Press on March 8, in an article entitled: “Bernie Sanders is NOT a Jew”. In the same familiar tone of distortion and self-pity, Greenfield theorized: “While Bernie Sanders invoked his last few drops of Jewishness and the Holocaust in support of a Muslim anti-Semite’s cry bullying, he didn’t feel the need to do so for the Jewish State when it actually stood on the verge of destruction. Instead, he had called for denying arms to Israel before the Yom Kippur War.”

How about the United Nations, which has failed to enforce a single resolution of the dozens of resolutions passed to demand justice for the Palestinians and accountability from Israel?

It is an “anti-Semitic circus” according to Israeli Prime Minister, Benjamin Netanyahu. The novel designation followed the recent UN Human Rights Council (UNHRC’s) decision to compile a list of international and Israeli companies that do business in illegal Jewish settlements in the Occupied Territories.

Despite the fact that the UN is yet to reverse the worsening plight of the Palestinians or advance their cause beyond symbolic gestures, one rarely hears the accusation that the UN is anti-Palestinian, or anti-Arab.

On the other hand, for merely censuring Israeli action by words only, the UN, according to Jennifer Rubin writing in the Washington Post on February 16, “tolerates and, by its silence, condones, anti-Semitism.”

The US government has blindly and unconditionally given credence to that notion, marching to the drumbeat of the Israeli government on every occasion and boycotting international institutions whenever Israel raises the frequently false flag of anti-Semitism.

The matter is not only pertinent to Israel and Palestine. Anyone who dares go against Israel’s interest in the region and around the world is a candidate for the manipulation of Israeli terminology.

Following the Iran nuclear deal between Iran and western powers, conservative commentator, Debbie Schlussel, coined new terminology: ‘Jews in the Name Only’ or JINOs. Those alleged JINOs are the 98 prominent ‘Hollywood Jews’, who backed the Iran deal in an open letter.

By completely shutting the door on any form of criticism of Israel, Zionism, and the censure of its military behavior in the region coupled with the daily violence meted out against occupied Palestinians, Israel has expanded the definition of anti-Semitism to include whole countries, governments, international institutions and millions of independently thinking individuals the world over.

However, not even such deliberate distortion should prevent us from making the differentiation loud and clear: anti-Jewish racism should be condemned as loudly and decisively as Islamophobia and any other form of racial discrimination and bigotry.

However, criticizing violent political movements and the behavior of any state that violates international law and human rights is a moral duty. Israel will not be the exception.