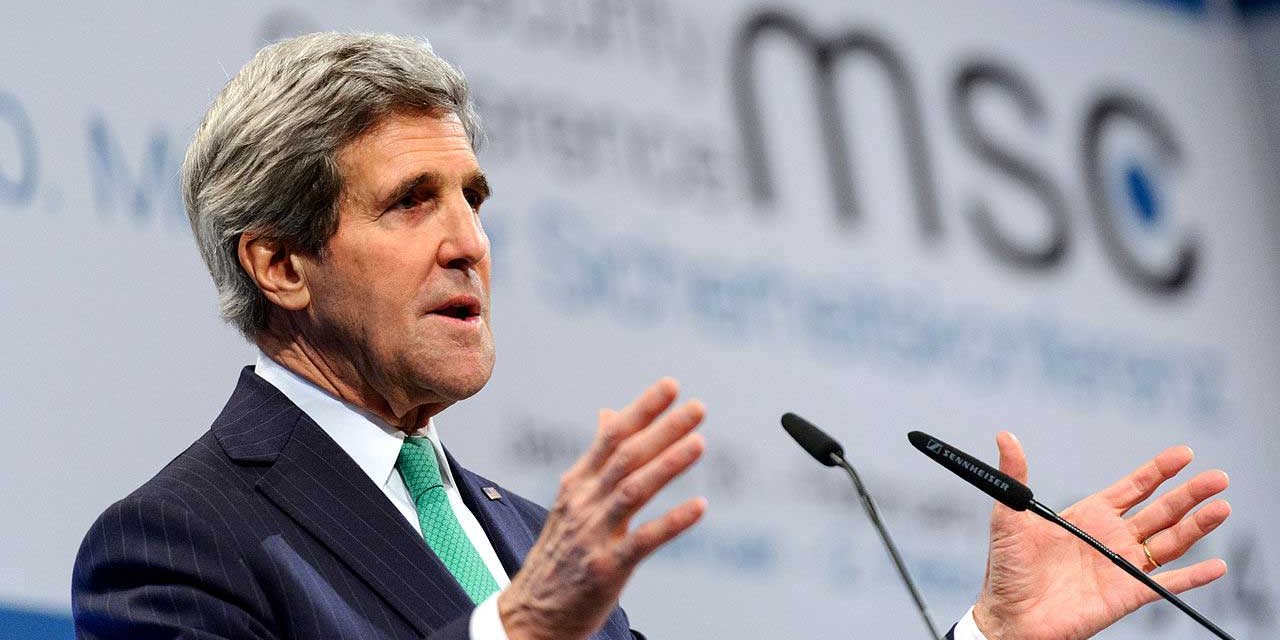 US Secretary of State at the 50th Munich Security Conference, February 1, 2014 (Tobias Kleinschmidt/MSC/licensed under CC BY 3.0 DE)

John Kerry is, besides many other unpleasant things, a rather ridiculous man, and he has managed to prove that proposition time and time again.

He used his recent commencement address at Northwestern University to attack Donald Trump. It is difficult to understand why young graduates at one of America’s better universities would want to hear political boiler plate from a key member of a failed and dying administration, rather than the usual vaguely inspiring stuff about the future, but that is what the graduating class got for their student fees.

I suppose, as so often is the case in America, the empty prestige of having someone with a big job speak, even when they have nothing to say, mattered. After all, Hillary Clinton has collected countless millions doing exactly the same thing for audiences at investment banker and defense contractor banquets in recent years.

Well, the part of Trump on which Kerry focused was his proposal for a wall with Mexico.

I don’t like walls myself, and it is my belief that even if elected Trump, for many reasons, will not succeed in emulating the Emperor Hadrian. Still, you might expect from the point of view of a Secretary of State, supposedly gazing upon the world’s countries with an impartial, god-like eye, that if it is okay for Israel to keep building walls, and it has several new ones underway right now, all built on other people’s property, why can’t others? The reasoning in both cases, and in all other cases such as those in Kerry’s contemporary Europe where new walls of various forms are frantically being built, is the same: we need to stop unwanted people crossing the border.

Can anyone even imagine Kerry——this man who, once not long ago, reminisced over Champaign toasts about some distant relative or another of his who was allegedly part-Jewish (truly, has groveling by a Secretary of State reached such levels before? I would have expected his entire audience either to choke or throw up)——ever saying a single word to Israel about its walls, walls which go far beyond serving Israel’s border fears to literally chopping up and destroying the land which supports millions of other people? It would be as though Trump were demanding a series of walls inside Mexico to balkanize the entire country and then set about building them himself with America’s armed forces. Now that would be utterly ridiculous, not to say criminal, but Israel’s doing just that is never called ridiculous or criminal, and it is certainly is never questioned by Kerry.

I don’t like walls myself, and it is my belief that even if elected Trump, for many reasons, will not succeed in emulating the Emperor Hadrian.

And then, as though in an effort to reclaim the stature of his address from just political campaign boiler plate, Kerry’s rhetoric drifted off to the subject of a future borderless world.

Now that is an old idea that appeals greatly to me, but I know very well that Kerry is being dishonest here. The world in fact, not all that long ago, pretty much was borderless. It was precisely the rise of the modern nation state in the 19th century which killed off that amiable concept requiring no passports or visa or permissions for moving about. Of course, we are talking about precisely the kind of modern nation state which Kerry has lovingly served in expanding its power and influence over others for his entire adult life.

Kerry’s dishonesty extends into what he even means by a “borderless world.” Now, I have always believed the Apostle Paul in emphasizing deeds rather than words, so If we are to judge by Kerry’s actual acts and those of predecessor Secretaries of State such as Hillary Clinton or Madeleine Albright or Henry Kissinger, and not by the State Department’s regularly-broadcast, doubtful advertising claims, John Kerry’s concept of a “borderless world’ is one in which the United States runs everyone’s affairs, rendering the borders of individual countries meaningless.

Now, that is a concept which very much does not appeal to me, nor does it appeal, I suspect, to a great many of the world’s seven billion people and their governments.

Just recently, this dishonest and generally unpleasant man has put an ultimatum to the government of Syria, making threats that if he doesn’t see what he wants by the beginning of August, there will be serious consequences. That certainly sounds to me like a Mafia Don speaking, demanding payment of protection money from some business, or else.

John Kerry has no business telling the government of Syria to do anything, much less to dissolve itself. It is, and has been, a reasonably popular government, one which receives the support of a majority of Syrians in polls and elections. Among other reasons for its popularity is President Assad’s defense of religious minorities. Syria’s citizens form an elaborate quilt of various religions, and they know their rights to worship as they please are protected in a region of the world where that is not common. Some of Mr. Kerry’s closest working associates in the region cannot say the same thing, and indeed they include associates who are quite violent towards people of differing faiths.

The proxy forces which Kerry and his predecessor, Hillary Clinton, have supported for five years in tearing Syria apart consist literally of various gangs of intolerant extremists and cut-throats. Boy, when it comes to double-speak, John Kerry is your man.

John Kerry has no business telling the government of Syria to do anything, much less to dissolve itself.

By what right does he do this? None, except that might makes right. America has supported terror in Syria, supplying weapons, platoons of cut-throats, and training while supporting the thugs of Turkey and Saudi Arabia in their logistics of destruction, all while pretending in State Department advertisement after advertisement that it opposes terror. And we’ve only just learned that Hillary Clinton supported the transfer of supplies of deadly Sarin nerve gas from Gadhafi’s stockpiles in wrecked Libya (another stunning State Department achievement) through a secret pipeline (read: Turkey) to the cut-throats in Syria where it was promptly used to kill civilians in the hope of blaming Assad and creating a casus belli for the United States (or, as Obama put it in his elliptical language, responding to Assad crossing a red line).

But John Kerry still hasn’t got what he wants in Syria, so now we have a new threat. Why is Kerry so determined to topple the government of Syria? Because Assad is an independent-minded leader, one who does not immediately say “yes, sir,” to every whim of Washington’s, and if there is anything which recent history teaches us, it is that the outfit Kerry serves has no tolerance for the independent-minded. So as to emphasize the point, Washington has left behind a trail of death and destruction in the region—perhaps a million dead and millions made refugees—all of it aimed at getting rid of inconvenient independent leaders.

This intolerance by Washington of independent-mindedness is strongly supported—supported is actually much too feeble a word, demanded being more apt, and demanded regularly over heated phone lines—by the government of America’s colony in the region, the same government to whom Kerry fears even saying so much as a word about its many walls criss-crossing other people’s land.

Kerry was a rich boy who, after graduating university, started his political ascent by spending four months in Vietnam, busying himself with shooting peasants in the back from an armored speedboat racing up and down rivers. He wanted to gain some war “creds” for an anticipated political career. Apart from his killings in Vietnam, he made such a muck of things, leaving behind colleagues who had only contempt for his false heroics and self-promotion. Then our man Kerry, having returned home and seeing how badly the Vietnam War was regarded by people, decided to add some new “creds” to his resume, anti-war ones. So, no matter how the political winds turned in the future, John-boy was covered. He appeared with some anti-war demonstrators, once throwing his filthily-earned medals into a bin, from which they were later quietly retrieved for him.

As to Kerry’s actual attitude towards America’s dirty colonial wars, we have the testimony of his whole career in the Senate, as a Presidential candidate, and finally as Secretary of State, faithfully serving and supporting them.

Kerry’s campaign, in running for President in 2004, was so unbelievably dreary and empty of all meaning, that the American people actually re-elected the most disliked president in the country’s history, George Bush. That feat stands as a remarkable testimonial to John Kerry’s talents.

The only big thing Kerry seems ever to have done that was genuinely successful was marrying the woman who inherited the Heinz Ketchup and Pickle Fortune. That made him wealthy beyond his dreams, perhaps planting in his brain fanciful thoughts of an ambitious young George Washington marrying the widow, Martha Custis, said to have been the wealthiest woman in the American colonies.

When John Kerry says anything on any topic, his listeners would be wise to consider the source, for even though he walks around in the appointed robes of America’s Secretary of State, he is pretty much a life-long, ambitious, and dishonest failure.