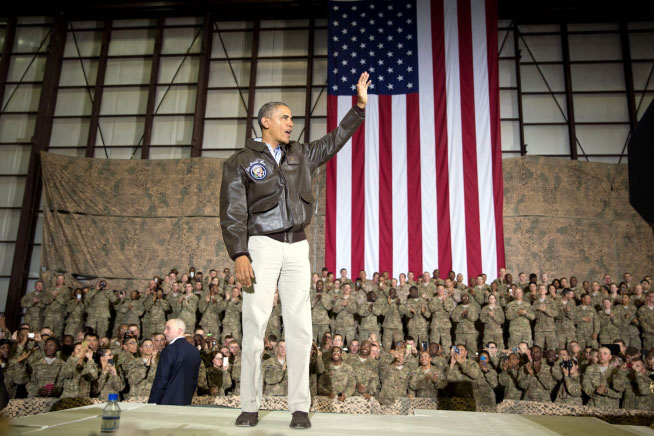 The Obama administration is threatening Russia and China while expanding war efforts in Afghanistan, Iraq, Syria, and next Libya.

The Obama Administration is expanding its military power and threats against Russia and China as well as increasing its war efforts in Afghanistan, Iraq, and Syria while preparing to restart Washington’s old war in Libya.

Most of this has been revealed in the first six weeks of the 2016 election year and President Barack Obama’s last full year in office without any significant new provocations against the United States. At least part of the White House motive must be to undercut right wing Republican campaign rhetoric alleging Obama and the Democrats are “soft on defense,” and creating a more robust martial entry into the president’s legacy.

On Feb. 9 the White House revealed that is sending up to 800 more soldiers to Afghanistan to join some 10,000 U.S. troops already in the country, according to an account in The Guardian, which reported: “In keeping with Barack Obama’s formal declaration that the U.S. is not engaged in combat—despite elite forces recently participating in an hours-long battle in Helmand province—defense officials said the additional troops would not take part in combat. But they will help the existing Helmand force defend itself against Taliban attacks, officials said.”

Nearly five years after the U.S., Britain and France launched a bombing campaign against the Libyan government to bring about regime change, President Obama is now preparing a second military intervention in that country. Washington’s initial intrusion resulted in the murder of the country’s leader, Col. Muammar Gaddafi, and unexpectedly sparked a civil war between two factions that seek to rule the country. The chaos induced the Islamic State to enter Libya, becoming a powerful force in recent years. The use of U.S. special forces troops and airpower are soon expected.

On Feb. 2 Defense Secretary Ashton Carter addressed the Economic Club of Washington about the new military budget and its uses, noting: “We don’t have the luxury of just one opponent, or the choice between current fights and future fights. We have to do both.” This evidently means fighting in the Middle East now and preparing for a much bigger war in the future against a more formidable force. Who might that be?

The Washington Post‘s Missy Ryan wrote the next day: “Carter previewed the Pentagon budget proposal for fiscal 2017, making a case for why China’s rapid military buildup and Russia’s intervention beyond its borders pose a bigger danger to U.S. security, and merit larger investments, than does the immediate threat from the Islamic State…. The proposal reflects Carter’s attempt to broaden the military’s focus to include not just the insurgent conflicts of the post-2001 era but also ‘higher-end’ threats from Russia and China, whose military innovation U.S. officials acknowledge has at times out-paced the United States.

“Almost half of the new investments… are related to what officials see as a growing threat from Moscow, where President Vladimir Putin has demonstrated his willingness to employ Russian military might from Ukraine to Syria…. A senior defense official said the advances made by Russia and China do ‘force a competition that has to be confronted in the next decade.'”

The proposed Pentagon budget for 2017 is $583 billion and if passed will go into operation Oct. 1. The separate national security budget, which also includes war-related expenses, will be about the same size, bringing such expenditures to about a $1 trillion annually.

Money for “securing Europe” will grow to at least $3.4 billion. There are presently about 75,000 U.S. military personnel in Europe.  On Feb. 2 The New York Times revealed that Obama “plans to substantially increase the deployment of heavy weapons, armored vehicles and other equipment to NATO countries in Central and Eastern Europe, a move that administration officials said was aimed at deterring Russia from further aggression in the region.” The war budget for the fight against the Islamic State is expected to reach $7 billion, an increase of 35%.

Speaking on the John Batchelor Show Feb. 2, Nation contributing editor and long time Russian analyst Steven F. Cohen argued that the Obama Administration’s actions will further militarize the “new Cold War” between the countries, making it more confrontational and likely to lead to actual war with Russia. According to the program notes paraphrasing Cohen’s remarks: “The move is unprecedented in modern times…. Russia will certainly react, probably by moving more of its own heavy weapons, including new missiles, to its Western borders, possibly along with a large number of its tactical nuclear weapons.”

Cohen pointed out that a new and more dangerous U.S.-Russian nuclear arms race has been under way for several years, which the Obama Administration’s decision can only intensify. The decision will also have other woeful consequences, undermining ongoing negotiations by Secretary of State Kerry and Russian Foreign Minister Lavrov for cooperation on the Ukrainian and Syrian crises and further dividing Europe itself, which is far from united on Washington’s increasingly hawkish approach to Moscow.

On Jan. 29 it was reported that President Obama is in the process of intensifying U.S. military engagement in Iraq. There are further reports Obama has revised the “terms of engagement” in Afghanistan to enable remaining U.S. forces to once again undertake combat missions. At the same time, in the name of “freedom of the seas,” Washington sent a Navy destroyer to intrude on a small China Sea parcel of territory claimed by China, Taiwan and Vietnam.

The United States spends far more annually on military matters than the combined war budgets of the eight other highest spenders, including China and Russia, and this doesn’t include non-Pentagon war and national security spending. While there may be a need for increasing spending for the Obama Administration’s several ongoing wars, where there have been setbacks and surprises, nothing remotely justifies the warlike rhetoric and war spending aimed at China and Russia. The U.S., NATO and other allies are inestimably more powerful in combination than these two countries—not that Beijing and Moscow have provided any evidence of an intention to eventually attack Washington.

This is an election year, and the Democratic Party must display martial prowess in its confrontation with the same reckless chest-beating Republican opposition that heedlessly launched the new wave of wars since 2001 that President Obama has been continuing these last seven years. It is also an escalation of the U.S. threats to China and Russia, warning of the potential military consequences of disrespecting the leadership of the global superpower.