Next Onslaught in Gaza: Why the Status Quo Is a Precursor for War 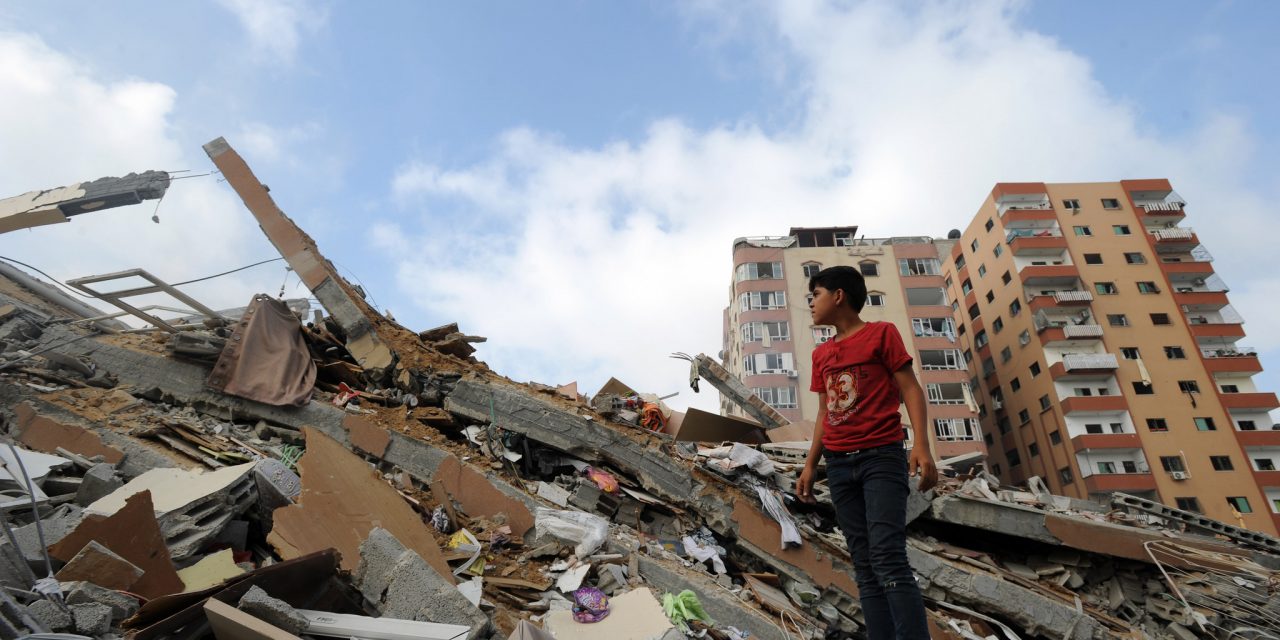 A Palestinian boy stands amid the rubble of a residential tower destroyed during Israel's 2014 assault on Gaza. (Shareef Sarhan/UN)

Israel’s strategic, political and military tactics, as it stands today, will not allow Gaza to live with a minimal degree of dignity.

It is not true that only three wars have taken place since Hamas won parliamentary elections in 2006 in the Occupied Palestinian Territories. Other wars that were deemed insignificant or ‘skirmishes’ also took place. Operation Returning Echo in March 2012, for example, killed and wounded over 100 people. But since the death toll, relative to the other major onslaughts seemed trivial, it was not cited as ‘war’, per se.

According to this logic, so-called operations Cast Lead (2008-9), Pillar of Defense (2012) and the deadliest of them all, Protective Edge (2014) were serious enough to be included in any relevant discussion, especially when the prospective new Israeli war on Gaza is considered.

It is important to denote that most of the media, mainstream or other, adheres to Israel’s designations of the war, not those of Palestinians. For example, Gazans refer to their last confrontation with Israel as the ‘Al-Furqan Battle’, a term we almost never hear repeated with reference to the war.

Observing the Israeli war discourse as the central factor in understanding the war against the Resistance surpasses that of language into other areas. The suffering in Gaza has never ceased, not since the last war, the previous one or the one before that. But only when Israel begins to mull over war as a real option, do many of us return to Gaza to discuss the various violent possibilities that lie ahead.

The problem of relegating Gaza until Israeli bombs begin to fall is part and parcel of Israeli collective thinking—government and society, alike. Gideon Levy, one of the very few sympathetic Israeli journalists in mainstream newspapers wrote about this in a recent article in Haaretz.

“The addiction to fear and the eternal wallowing in terror in Israel suddenly reminded one of the existence of the neighboring ghetto,” he wrote in reference to Gaza and sounding of Israeli war drums. “Only thus are we here reminded of Gaza. When it shoots, or at least digs … (only then) we recall its existence. Iran dropped off the agenda. Sweden isn’t scary enough. Hezbollah is busy. So we return to Gaza.”

In fact, Israel’s exceedingly violent past in Gaza does not hinge on Hamas’ relative control of the terribly poor and besieged place, nor is it, as per conventional wisdom, also related to Palestinian factionalism.  Certainly, Hamas’ strength there is hardly an incentive for Israel to leave Gaza alone, and Palestinians’ pitiful factionalism rarely help the situation. However, Israel’s problem is with the very idea that there is a single Palestinian entity that dares challenge Israel’s dominance, and dares to resist.

Moreover, the argument that armed resistance, in particular, infuriates Israel the most is also incorrect. Violent resistance may speed up Israel’s retaliation and the intensity of its violence, but as we are currently witnessing in the West Bank, no form of resistance has ever been permissible, not now, not since the Palestinian Authority was essentially contracted to control the Palestinian population, and certainly not since the start of the Israeli military occupation in 1967.

Israel wants to have complete monopoly over violence, and that is the bottom line. A quick scan of Israel’s history against Palestinian Resistance in all of its forms is indicative that the Israel vs. Hamas narrative has always be reductionist, due partly to it being politically convenient for Israel, but also useful in the Palestinians’ own infighting.

Fatah, which was Palestine’s largest political party until Hamas won 76 out of the legislative council’s 132 seats in the early 2006 elections, has played a major rule in constructing that misleading narrative, one that sees the past wars and the current conflict as an exclusive fight between Hamas, as political rival, and Israel.

When seven of Hamas fighters were recently killed after a tunnel collapsed—which was destroyed during the 2014 war by Israel and was being rebuilt—Fatah issued a statement that appeared on Facebook. The statement did not declare solidarity with the various resistance movements which have operated under horrendously painful circumstances and unremitting siege for years, but chastised the ‘war merchants’ – in reference to Hamas—who, according to Fatah, “know nothing but burying their young people in ashes.”

But what other options does the Resistance in Gaza actually have?

The unity government which was agreed on by both Fatah and Hamas in the Beach Refugee Camp agreement in the summer of 2014 yielded no practical outcomes, leaving Gaza with no functioning government, and a worsening siege. That reality, for now, seals the fate of a political solution involving a unified Palestinian leadership.

Submitting to Israel is the worst possible option. If the Resistance in Gaza was to lay down its arms, Israel would attempt to recreate the post-1982 Lebanon war scenario, when they pacified their enemies using extreme violence and then entrusted their collaborating allies to rearrange the subsequent political landscape. While some Palestinians could readily offer to fill that disreputable role, the Gaza society is likely to shun them entirely.

A third scenario in which Gaza is both free and the Palestinian people’s political wishes are respected is also unlikely to materialize soon, considering the fact that Israel has no reason to submit to this option, at least for now.

This leaves the war option as the only real, tragic possibility. Israeli analyst, Amost Harel highlighted in his article “Hamas’ Desire to Increase West Bank Attacks Could Trigger New Gaza War” the reasoning behind this logic:

“To date, Israel and Palestinian Authority security forces have succeeded in scuttling most of Hamas’ schemes,” he wrote, referring to his allegations that Hamas is attempting to co-opt the ongoing uprising in the West Bank.

In one of several scenarios he offered, “The first is that a successful Hamas attack in the West Bank will spur an Israeli response against the group in Gaza, which will lead the parties into a confrontation.”

In most of Israeli media analyses, there is almost total disregard for Palestinian motives, aside from some random inclination to commit acts of ‘terror.’ Of course, reality is rarely close to Israel’s self-centered version of events, as rightly pointed out by Israeli writer Gideon Levy.

After his most recent visit to Gaza, Robert Piper, UN envoy and humanitarian coordinator for the Occupied Territories, left the Strip with a grim assessment: only 859 of homes destroyed in the last war have been rebuilt. He blamed the blockade for Gaza’s suffering, but also the lack of communication between the Ramallah-based government and Hamas movement in Gaza.

“There’s no changes to the underlying fragility of Gaza,” he told AFP, and the situation “remains on a frankly disastrous trajectory of de-development and radicalization, as far as I can tell.”

Under these circumstance, it is difficult to imagine that another war is not looming. Israel’s strategic, political and military tactics, as it stands today, will not allow Gaza to live with a minimal degree of dignity. On the other hand, the history of Gaza’s resistance makes it impossible to imagine a scenario in which the Strip raises a white flag and awaits its allotted punishment.