Harry Jaffe explains what sets Bernie Sanders apart from the other US presidential candidates. 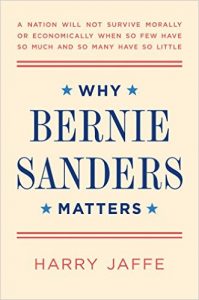 The political scene in the U.S. can be viewed as two partisan groups—two sides of the same coin— with essentially the same U.S. idealism, a few domestic differences, both having lots of corporate influence, both espousing the same foreign policy with the exception of small groups within each party. Every now and then a third party candidate comes along and is labeled as a “spoiler” or is simply bypassed by the weight of the dominant mainstream media (MSM) coverage. The latter of course can happen within a party as witnessed by Ron Paul and the Republicans where his views were generally supported by opinion polls, but his nomination faded quickly from the MSM limelight. Ron Paul had previously run as a third party Libertarian (1988).

In the current nomination spectacle, Bernie Sanders, labelled as a “socialist”, proclaiming to be a “democratic socialist” is leaving his independent roots and seeking the presidential nomination within the Democratic Party. With the power of the corporate world against him, with the mainstream media doing their best to minimize his exposure two questions arise—why the choice to go with the Democrats, and simply why now?

Harry Jaffe’s short and readily readable biography, Why Bernie Sanders Matters, provides a good background history on the events and political philosophy that has brought Bernie Sanders from Vermont and both Houses of Congress to seek the presidential nomination. In his introduction, Jaffe indicates that his history is one of “surprise and shock” vis-a-vis his political rivals, and “has thrived on being the underdog no one takes seriously.” Formulating ideas that are antithetical to corporate domination, Sanders saw the Democrats as being the best vehicle within which to try once again to have his common sense voice heard.

That voice argues consistently for the working class, the poor, the stagnating middle class, for the environment, for better education (free as well), for better health care and better civic services and structures in general, (less on incarceration and jails), supported and funded by the government. Jaffe recognizes, “Now income inequality and saving the middle class are the economic issues of the day. That’s only one of the reasons Bernie Sanders Matters.” The other reasons are well articulated through this biographical work, which also reminds the reader that at the “heart of the campaign” are “the economic issues of worker’s rights, income inequality, and the outsized power of the superwealthy.”

A recent poll gave Hillary Clinton a close 48 to 41 percent tally within the Democratic Party (Washington Post, Hillary Clinton’s Lead Over Bernie Sanders Slipping in New Poll, January 12, 2016) and has caused Clinton, in spite of her overwhelming corporate/financial support and her dominant MSM profile to react aggressively to some of Sanders positions. It is another reason Bernie Sanders matters, as he is presenting ideas that are truly socialist and is receiving majority support for those under that age of 45. He matters because “he represents the possibility of a revival in American democracy.” He matters because he calls for a political revolution, a vote to kick out the oligarchy.

Obama tried the hope and change thing for the Democrats and won. But he was not truly an outsider (other than being “colored”) and his hope and change was all rhetoric and hubris without any real formulations of what that change would be. His hope and change did nothing but maintain and strengthen the status quo of the corporate oligarchs.

Bernie Sanders matters because, while not campaigning for hope, he is campaigning for change, and has provided substantial ideas, that if given the opportunity for realization, would create significant changes in U.S. domestic policy—and give hope to many who have given up on the biases of the U.S. political system.

Jaffe ends by summarizing, “Sanders is delivering what a great many Americans consider to be the truth, painful though it might be, and he’s giving them hope and an opportunity to change the country’s course: from exclusion to inclusion, from hoarding to sharing, from oligarchy back to democracy.”