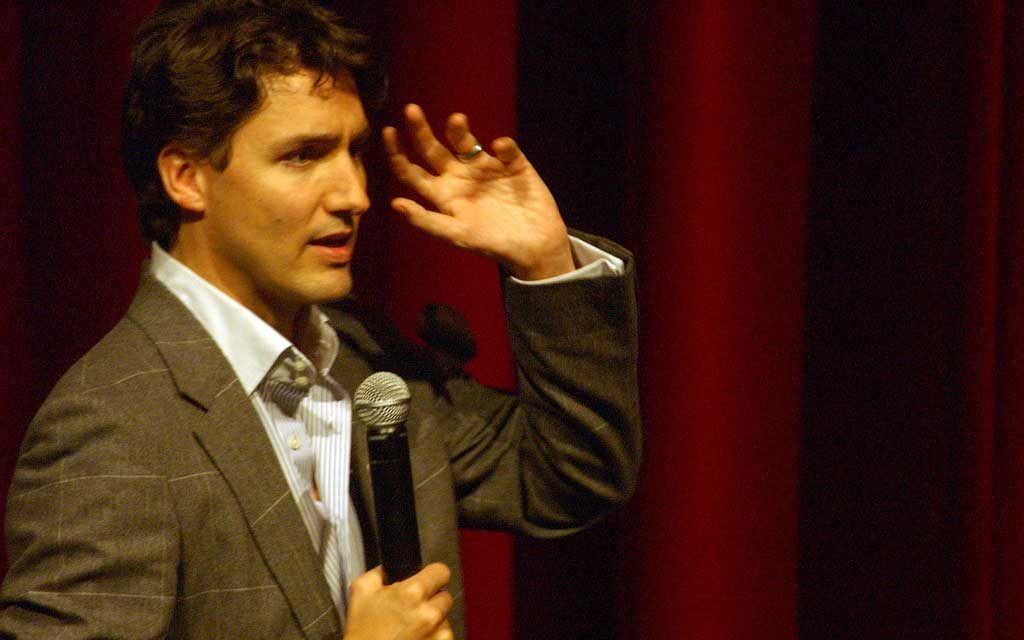 Justin Trudeau speaking in front of a packed crowd at the Humanities Theatre at the University of Waterloo in March 2006. (Mohammad Jangda)

The Liberals have provided much more amicable words so far with foreign relations. Whether they provide any real actual fresh change is yet to be seen.

Sometimes my writing is reactive rather than proactive, but when the new government is just starting up is a great time to be proactive. The Liberals promised change and domestically—so far—seem to be living up to that change. What the future holds for foreign policy is yet to be determined, but as Canada has always been subservient to the U.S. and NATO, I hold little prospect for real change in that area.

While the warships agenda could fall under many different file headings—economy, security, coast guard, military—the big question overall is simply, why?

Does Canada need a navy at all? Who is going to attack Canada? Okay, I hear your replies already, the standard meme about ‘fighting them over there so we don’t have to fight them here,’ the standard anti-terror response. Unfortunately by ‘fighting them over there’, by supporting U.S. military actions intended to control resources and resource revenues—e.g. the petrodollar and it global reserve currency status—we are simply creating more chaos and more ‘terrorists’, more blowback.

Another argument is along the line of doing our part to contribute to NATO. But that organization is being used well past its due date (1991, when the Soviet Union collapsed) as an extension of U.S. military control in Europe and projecting into the Middle East and Asia itself. NATO should be disbanded, as Russia, in spite of all the mainstream propaganda, is not a threat—other than to U.S. global hegemony.

Let’s pretend we do need a navy for defense purposes—well and good, but it should be defensively oriented. For $45 billion dollars—and as time goes on more than likely way more than that—much could be done to build and support an effective coast guard system used for civilian purposes, security of our ocean boundaries, and then perhaps the improbable event that anyone would send their navy against Canada.

Further, that amount of money would be much better spent on the infrastructure programs yet to be detailed. It could build many hospitals, schools, and transportation networks (high speed rail, as with China, Japan, Russia, and Europe). It would support many child care initiatives, Indigenous rights initiatives, and research and development for clean energy projects. All these are much more functional towards a healthy society and a healthy economy than providing more ways for the U.S. to project its power overseas.

Let us remove ourselves from the Harper agenda and build a better Canada, not a more hostile one.

In consideration of NATO, Russia, and U.S. efforts at retaining control of global power, I would hope but not expect that any well informed individual would be considering data not used by the mainstream media in presenting events in Syria and the wider MiddleEast. It is a stew of many rotten components, a true potpourri of geopolitical events.

Everyone should be aware of the Russian jet shot down by a Turkish F-16. While it may have strayed into Turkish space, it was shot down over Syria as admitted by the Pentagon and as witnessed by the pilots parachute killing and retrieval. Two years previously, Turkey had complained about Syria downing one of its jets in Syrian airspace, saying under international rules and policies that the pilot should have been warned off and allowed to return to Turkey. Two Russian planes entered Israeli airspace without being shot down, but turned back after a warning. Similarly, two Israeli planes turned back from Syria’s air space after Russia shut down their communications electronically and warned them to turn back.

Regardless, it is most likely that Turkey, with the knowledge of the U.S. (Turkey would not engage Russia on its own without the U.S. knowing and perhaps even participating surreptitiously) was attempting to draw Russia into a larger conflict with NATO backing.

Why? In order to protects its oil wealth that it is transporting from Islamic State (IS) and selling on the black market. In order to have an excuse to invade northern Syria and provide a no-fly safe haven for its IS allies trying to take down Assad, in order to keep its lines of communication and supply open for IS and its allies, and ultimately to bring NATO into conflict with Russia/Syria in order to have backup for these plans.

Well, Turkey did get their no fly zone, but it is being provided by the Russians. They are now arming their planes with offensive missiles and have brought the S-400 missile system to their air bases (yes, now plural) in Syria, at the same time supplying Syria with the older S-300, in itself an effective missile defense system.

Russia stepped up its bombardment of IS oil facilities in response. Farcically, the U.S. started bombing some oil tankers after Russia’s attacks, as if they had not seen these masses of trucks with their satellite and drone spy cameras well before Russia got to them.

Russia, alongside the Syrian government, is the only legal entity in Syria as per UN and other international regulations. Canada is “training” the Kurds in northern Iraq, and although we have stopped our planes from bombing, are still complicit with aerial attacks as they continue to use spy planes and refueling planes for the U.S.

It is probably a good thing to support the Kurdish forces, but it needs to be nuanced to understand Russia is now the dominant power in the country and is making good progress towards securing the borderlands, eliminating the IS supply routes, and the IS oil chain. Canada is not doing this in order for the Kurds to have an independent country, or if that is one of the rationales, then again we would be butting heads with Turkish intentions which are to destroy Kurdish nationalism.

Consider our allies in this mess. As above, Turkey is one of them, making stupid and costly geopolitical mistakes, vying to become a born again Caliphate even if subservient to NATO and the U.S.

Another wonderful ally is Saudi Arabia. Ironically they are suffering financially from the oil price drop that they initiated more so than Canada, the U.S., or Russia. This great ally is the one that supports the Sunni terrorists of IS, and before that al-Qaeda, and back towards the Taliban and mujahedeen. This ally has no democracy, is a feudal theocratic state that beheads people without due process of law (about 150 so far this year), along with amputations and stonings—Harper should be warned about their “barbaric cultural practices”. The Saudis have attacked Yemen without success, creating more chaos and creating more space for al-Qaeda to find a home (hmmm…perhaps that is their ultimate goal).

Israel constantly plays the “terror” narrative, creating the storyline that best suits their domestic agenda of ethnic cleansing. Much has been written about this and it is not the purpose here to go over all the information that could well be researched by someone truly interested in moving beyond the Israeli narrative.

Having accepted an invitation from Netanyahu to visit Israel, then reiterating the line that Canada has had strong relations with Israel over the past decades, Trudeau will probably fall in line with western geopolitical determinants and continue to support Israel while breathing a few platitudes about the needs of Palestinians. I would hope for a more, but expect only the status quo—which upon reflection may well play out with our own indigenous population.

The Liberals have certainly provided a fresh face on the international stage. They have provided much more amicable words so far with foreign relations. Whether they provide any real actual fresh change is yet to be seen.

From Bloomberg News, the Saudis are importing all of their wheat crop needs as their two decades old program to grow their own has seriously depleted the aquifers supplying the water. As part of this they have bought a majority stake into the Former Canadian Wheat Board for $250 million (CAN). Great work, Mr. Harper, you certainly know how to choose our allies—but will the Liberals do any better?