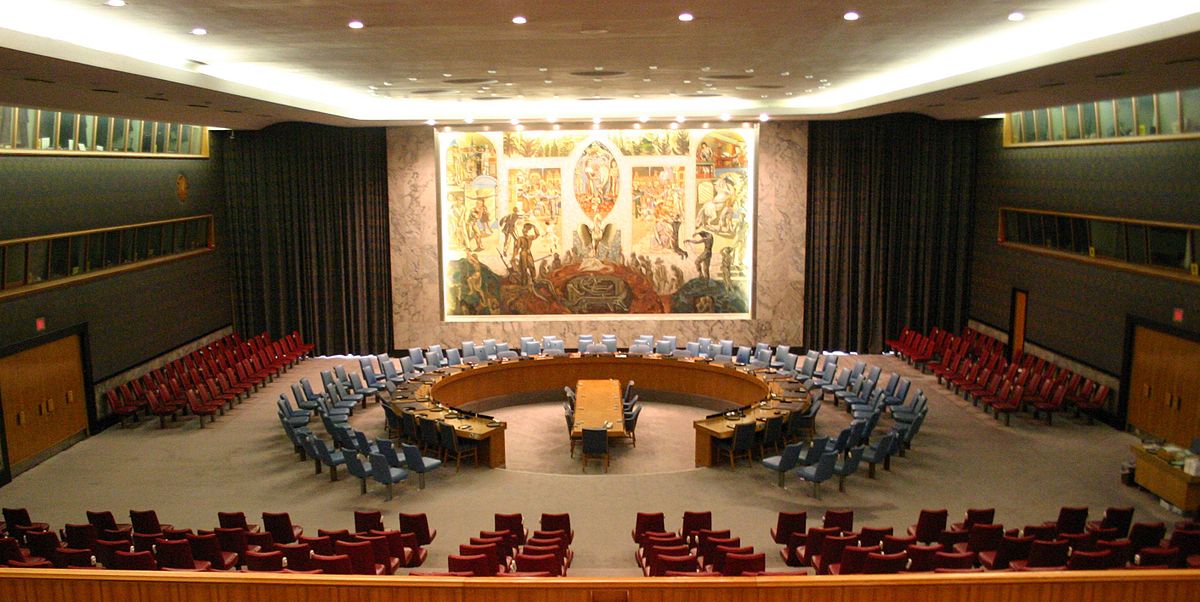 Stalin insisted on a veto power for the UN Security Council's permanent members to ensure that the UN would remain ineffectual as a world state apparatus.

New Zealand has the presidency of the UN Security Council for one month. As such, the New Zealand Foreign Affairs and Trade Minister, Murray McCully, lost no time in resorting to New Zealand’s historical stance on the world stage: moral posturing.

New Zealand as an impotent state can only assert itself by grandiose talk; by moralising rectitude. New Zealand can only serve as an appendage to United Nations forces throughout the world. That is to say, New Zealand relies on the weapons of its “allies” while assisting with the moral rationalizations for “regime change”, global chaos, and as a little nation with a shrill voice supposedly speaking for some nebulous thing called an “international community.”

Mr. McCully, according to a recent news report,

has outlined ambitious plans for change as New Zealand prepares to take a month-long presidency of the UN Security Council. The agenda includes … lobbying for the end of the veto right, which has stopped the UN from intervening in some of the worst conflicts in recent history. The right to veto intervention and resolution has left the UN Security Council powerless in the face of many deadly conflicts over the decades. Most recently Russia and China used the veto during the ongoing Syrian conflict. Russia also used the veto in Crimea, while the United States exercised it during conflict in the West Bank. But the New Zealand Government wants to use what influence it has to support efforts to end the veto privilege. “France have put forward an idea that they should all voluntarily surrender the veto by agreement in areas where mass atrocities arise, and we think that is a really good idea,” says Mr. McCully. “It doesn’t involve anything binding. It’s something the P5 members should think about.”

In February, in New Zealand’s bid for the Security Council position, Mr. McCully stated to the UN:

This is what British Whig Prime Minster Gladstone said in 1880:

I think it my duty…to cherish respect and sympathy for every foreign state, without exception and distinction. But, when there is apparent reason to believe they are prosecuting schemes adverse to liberty beyond their own borders, the, as I had tried in former times, as I will now raise up moral forces as far as in me lies, to defeat their aims. (Gladstone to Lord Reay, April 9, 1880).

Here we have the precise formula that has continued to be used by meddling internationalists in the name of “moral forces,’ as Gladstone put it in 1880, and since then with Wilson’s “Fourteen Points,” Roosevelt’s “Atlantic Charter,” and the screeds about the “rights of small nations” in both world wars, Ronald Reagan’s “evil empire,” the “new world order” of both presidents Bush, “the war against terrorism,” the prevention of “ethnic cleansing,” “human rights,” “democracy.” Such clichés have been used for over a century to justify global power-politics in the name of Gladstonian “moral forces.” The real purposes are occasionally proclaimed, such as the war aims of Free Trade mentioned in the Fourteen Points, the Atlantic Charter, and more recently the Rambouillet Agreement for the economic pillaging of Kosovo. But even here, when the aims are stated relatively clearly, they too are buried beneath the mountain of moral rhetoric to be comprehended by all but the more vigilant.

So what we have is our own Little Gladstone, Mr. McCully, outlining how the United Nations might be improved, to be enabled more effectively to use military force to impose and maintain what President George H. W. Bush in 1990 hoped would be the start of a UN “new world order.” As Bush said: “Through the UN Security Council, Iraq has been fairly judged by a jury of its peers, the very nations of the Earth. Today the regime stands isolated and out of step with the times, separated from the civilized world not by space but by centuries.” In declaring a globalist war on Iraq, for reasons that have subsequently found to be bogus, Bush’s rationale was precisely what is today being used by Mr. McCully to justify the reform of the Security Council, accusations of “human rights abuses.” Bush continued:

Iraq’s unprovoked aggression is a throwback to another era, a dark relic from a dark time. It has plundered Kuwait. It has terrorized innocent civilians. It has held even diplomats hostage. Iraq and its leaders must be held liable for these crimes of abuse and destruction. But this outrageous disregard for basic human rights does not come as a total surprise. Thousands of Iraqis have been executed on political and religious grounds, and even more through a genocidal poison gas war waged against Iraq’s own Kurdish villagers.

Pricelessly the same Gladstonian appeal to “moral forces” was used against Milosovic, Qaddafi, Saddam Hussein, and now Assad. Russia’s Putin is right now being accused of moral outrages in the Ukraine, while demands for military intervention are increasingly strident. Is it merely coincidental that all those who become targets of moral indignation from the so—called “world community” happen to be those states whose real offences seem to have been in some manner to have upset the interests of the USA and/or global capital?

What Mr. McCully is proposing is nothing new. The same rhetoric has been used since the late 19th century and for similar interests. Mr. McCully proposes using the question of “mass atrocities” as the reason for what amounts to armed invasion by UN troops Katanga style. Any such invasion would imply “regime change” and the maintenance of the new regime by UN forces stationed indefinitely in the invaded state, as per Afghanistan and Iraq. Even the Third Reich used the allegation of the Polish “ethnic cleansing” of Germans to invade Poland.

When Stalin insisted that the permanent members of the Security Council must be empowered with the veto, much to the chagrin of the USA, he did so for the very reason that Mr. McCully laments; to ensure that the UN would remain ineffectual as a world state apparatus. The world order proposed by the neo-Gladstonians would be one of perpetual disorder; what neocon ideologue Lt. Col. Ralph Peters has referred to approvingly as “constant conflict.” Hopefully the legacy of Stalin rather than Gladstone will prevail.