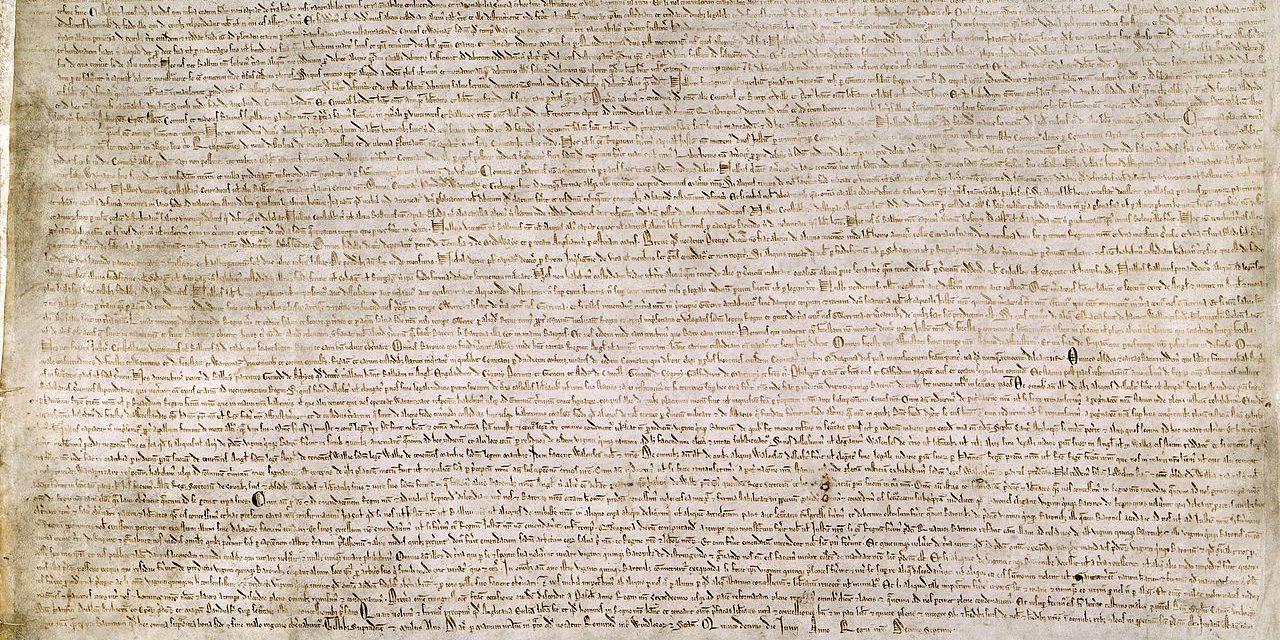 The Magna Carta (originally known as the Charter of Liberties) of 1215, written in iron gall ink on parchment in medieval Latin, using standard abbreviations of the period, authenticated with the Great Seal of King John. (British Library/Public Domain)

A new slave existence is being created in front of our eyes as law ceases to be a shield of peoples and becomes a weapon in the hands of government.

Monday, June 15, 2015, is the 800th anniversary of Magna Carta.  In his book, Magna Carta, J.C. Holt, professor of medieval history, University of Cambridge, notes that three of the chapters of this ancient document still stand on the English Stature Book and that so much of what survives of the Great Charter is “concerned with individual liberty,” which “is a reflexion of the quality of the original act of 1215.”

In the 17th century Sir Edward Coke used the Great Charter of the Liberties to establish the supremacy of Parliament, the representative of the people, as the origin of law.

A number of legal scholars have made the irrelevant point that the Magna Carter protected rights of the Church, nobles, and free men who were not enserfed, a small percentage of the population in the early 13th century.  We hear the same about the US Constitution—it was something the rich did for themselves. I have no sympathy for debunking human achievements that, in the end, gave ordinary people liberty.

At Runnymede in 1215 no one but the armed barons had the power and audacity to make King John submit to law.  The rule of law, not the rule of the sovereign or of the executive branch in Washington acceded to by a cowardly and corrupt Congress and Supreme Court, is a human achievement that grew out of the Magna Carta over the centuries, with ups and downs of course.

Blackstone’s Commentaries in 1759 fed into the American Revolution and gave us the US Constitution and the Bill of Rights.

The Geneva Conventions extended the rule of law to the international arena.

Beginning with the Clinton Administration and rapidly accelerating with the George W. Bush and Obama regimes and Tony Blair in England, the US and UK governments have run roughshod over their accountability to law.

Both the US and UK in the 21st century have gone to numerous wars illegally under the Nuremberg Standard established by the US and UK following Germany’s defeat in WWII and used to execute Germans for war crimes.  The US and UK claim that unlike Germany they are immune to the very international law that they themselves established in order to punish the defeated Germans. Washington and London can bomb and murder at will, but not Germany.

Both governments illegally and unconstitutionally (the UK Constitution is unwritten) spy on their citizens, and the Bush and Obama executive branches, have eviscerated, with the complicity of Congress and the federal courts, the entirely of the US Constitution except for the Second Amendment, which is protected by the strong lobby of the National Rifle Association. If the gun control “progressives” have their way, nothing will be left of the US Constitution.

Washington and its European satellites have subordinated law to a political and economic hegemonic agenda.  Just as under the heyday of colonialism when the West looted the non-white world, today the West loots its own.  Greece is being looted as was Ireland, and Italy and Spain will not escape looting unless they renege on their debts and leave the EU.

Western capitalism is a looting mechanism.  It loots labor.  It loots the environment, and with the transpacific and transatlantic “partnerships” it will loot the sovereign law of countries.

For example, France’s laws against GMOs become “restraints on trade” and subjects France to punitive law suits by Monsanto. If France doesn’t pay Monsanto the damages Monsanto claims, France is subject to punitive sanctions like Washington applies to Russia when Russia doesn’t do what Washington wants.

A new slave existence is being created in front of our eyes as law ceases to be a shield of peoples and becomes a weapon in the hands of government.  Eight hundred years of reform is being overturned as Washington and its vassals invade, bomb, and overthrow governments that are out of step with Washington’s agenda.  Formerly self-sufficient agricultural communities are becoming wage slaves for international agribusiness corporations.  Everywhere privilege is rising above law and justice is being lost.

The concentration of wealth and power is reminiscent of the aristocratic era and of Rome under the Caesars.  The demise of the rule of law has stripped ordinary people of security and dignity.  Peoples of the world must protect themselves by acting in defense of the Great Charter’s principle that governments are accountable to law.  Governments unaccountable to law are tyrannies whatever they might call themselves, no matter how exceptional and indispensable they declare themselves to be.

Monday in Westminster in London, the International Tribunal for Natural Justice is forming. If my understanding of this work of Humanitad is correct, we have a cause for hope.  Perhaps the Tribunal will try the criminals of our time, almost all of which are “leaders” of Western governments, on the Internet with juries and prosecutors so that populations everywhere can witness the evil that every Western government represents.

Once the West is perceived as the evil force that it is, it will have to reform and again embrace Edward Coke’s vision of the Great Charter or become an unimportant backwater while the rest of the world goes on to better things.  The world is saved once the world ceases to bow down to the American Caesar.