Israel has signaled a readiness to attack Lebanon to destroy Hezbollah, but Iran may be the ultimate target.

South Beirut, LEBANON — These days, Lebanon, as with this region, is being shaken by political and ‘terrorism” crises, threats to stability, growing popular unrest, and ideological and theological sacrum bellum turbulence. Forces not seen since the beginning of the last century with the end of the Ottoman Empire and its replacement with the hegemonic Sykes-Picot diktat. 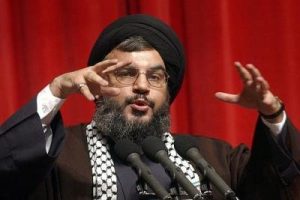 Yet, with all of Israel’s swelling international legitimacy problems, the Zionist regime still occupying another country, Palestine, can sound its bugle, which having no valves or other political pitch-altering complications, blast-summons its agents in Washington and elsewhere to get busy and circle the wagons.

Netanyahu indeed has blown his rams horn in the run-up to the June 30 “deadline” (to be extended yet again if necessary) for a 5+l agreement on the Iranian nuclear file. Israel’s agents have leapt up and are flooding Congress and the mass media with op-eds from no fewer than 14 pro-Zionist organization since May 15 Nakba Day, ranging from half a dozen articles, publications and mailings from the Washington Institute For Near East Policy (WINEP), to the Middle East Forum’s, Steven J. Rosen in the Washington Times, Dennis Ross in the New York Times, Congressional Testimony featuring James L. Jeffrey before the Senate Foreign Affairs Committee, and many more.

Unfortunately, in contrast to the AIPAC-ZOA organized blitz, many who oppose Zionist aggressions continue to waste their energies and actually aid their Zionist opponents by indulging in largely irrelevant, unproven, counterintuitive, counterproductive wing-nut conspiracy-theory blogging partly because this form of internet pollution is easy and does not require old fashioned research or marshaling of empirical facts or much thinking. So it remains no real contest for the Zionist lobby as they continue to dominate Congressional hearings and mainstream Op-eds, not to mention Fox news and CNN type outlets.

A WINEP memo, authored with AIPAC and the Zionist Organization of America (ZOA) is making its way to powerful opinion and policy makers this week on the subject of Iran and Hezbollah’s involvement in three regional wars and what opportunities it presents Israel to replace Hezbollah’s summer of 2006 “Devine Victory” with a summer of 2015 “Devine Destruction.”

Simultaneously, the Israeli army, according to Congressional staffers on the House Foreign Affairs committee, has forwarded to key allies detailed plans to evacuate more than a million civilians in southern Lebanon before obliterating Hezbollah and everything south of the Litani River—for starters. They carefully locate Mediterranean ports near Tyre and Saida where US Naval ships can rescue endangered Americans, hopefully doing a better job than the US Embassy did back in July-August of 2006. A senior military official confirmed these plans on June 3, 2015.

As this news wafted across the US Congress, Republican Presidential candidate Se Lindsey Graham, on cue began leading cheers for another Zionist aggression against Lebanon as he seeks Jewish campaign funding. As part of his entrance into the 2016 US Presidential race, a centerpiece of which will be his cash cow “Bomb Iran” plank, his staff has begun distributing a recent press release from the anti-Arab, anti-Muslim Zionist Organization of America (ZOA). It declares that “ZOA is very shocked and deeply critical of President Barack Obama’s recent statement, in an interview on Israeli TV, that military action against Iran would be ineffective in preventing Iran from becoming a nuclear power. This statement contradicts his repeated commitments that ‘all options are on the table.’ Clearly, when the President publicly states that a course of action would be ineffective he is removing it from the list of options of what he is prepared to do.”

An Israeli military intelligence source told the Jerusalem Post on June 3 that during the coming war, Hezbollah rocket and missile fire will be met with civilian evacuations, massive Israeli aerial strikes, and then by a ground offensive. “If we have no choice, we have to evacuate 1 million, 1.5 million residents in Lebanon, and act,” the source said. “Failure to evacuate the civilian population would result in many thousands of non-combatant deaths, according to Israeli army assessments” following a week-long drill simulating destroying Hezbollah on multiple fronts, including massive use of the Israeli air force. The Israeli embassy in Washington citing US-Israeli intelligence, including claimed sources inside Hezbollah, is telling Congressional leaders that Hezbollah is “in deep distress in Syria, cannot win that war and is in strategic trouble despite attempts by its Secretary General Sayyed Hassan Nasrallah to deliver morale-boosting speeches.”

Among the Zionist lobby’s current arguments is that Hezbollah is nothing more than Iran’s Lebanon branch of its Baji (people’s) militia and that with respect to the nuclear issue, is an argument being pushed by the Middle East Forum that “Iran is a revolutionary power with hegemonic aspirations seeking to assert its dominance in the region and uses an assortment of terrorism, proliferation, military proxies, and occasionally old-fashioned diplomacy to further its dominance. Do not expect Iran to compromise its principles any time soon.”

While conceding that a military confrontation with Iran could be costly and risk escalation, WINEP is telling the US Congress: “It is unlikely to produce either a U.S. defeat or a “war” in the sense normally used in American political debate—endless, bloody ground combat by hundreds of thousands of troops as in Iraq or Vietnam would not be necessary and this could be over quickly.”

Meanwhile, Dennis Ross, a former Middle East adviser to President Obama, reportedly believes that another Israeli war in Lebanon is just a matter of timing. He is currently working on trying to get the Gulf States more deeply involved against Iran. Ross frequently argues that “The Saudis see Iran trying to encircle them with its Quds Force killing Sunni Muslims in Syria, mobilizing Shia Muslim militias in Iraq, providing arms to the Houthi rebels in Yemen or fomenting unrest among Saudi Shia. Ross told AIPAC this week that Iran set the recent bombs in Saudi Shia mosques to frighten Shia into compliance with its projects. A tactic it has used many times before in Iraq and Ross argues that fundamentally, the Saudis believe that America’s friends and interests are under threat, and the U.S. response has ranged from indifference to accommodation such that an Israel war could be a ‘game-changer ’ in the region.

But it with respect to Hezbollah, that Israel and her agents see real nice prospects. The Zionist organizations talking points on Hezbollah include, but are not limited to the following:

Hezbollah continues to incur heavy losses in Syria and has entered a fight that neither it nor Iran can win. Its supporters in Lebanon are increasingly raising questions about why Hezbollah is killing Sunni’s in Syrian, Iraq and Yemen- and how this helps Lebanon. AIPAC argues that no one is Lebanon, except for a small percentage of hard core Party of God supporters believes its claimed justifications about “takfires, terrorists and IS” will destroy Lebanon unless Hezbollah fights in three countries.

Former Mossad director Efraim Halevy claims that Hezbollah, given what he labels its military entanglements in Syria, is unable to focus on fighting Israel and is incurring severe losses in manpower.

Handouts from Tel Aviv and Israeli embassy political officers in Washington and provided to friends of Israel for circulating, point out that Hezbollah’s support among Sunni’s in Lebanon is now essentially nil and is also weakening fast among its own Shia base as hundreds of sons are dying killing Sunni Arabs in the east rather than fighting Israeli soldiers in the south.

Congress is being advised that in Lebanon the rhetoric of Hezbollah Secretary-General is wearing thin and becoming shopworn with jokes in Lebanon’s media and even in Shia areas about the coming Devine Defeat. Senator John McCain complains Hezbollah is forcing the Lebanese army to fight a non-Lebanese war against IS (Da’ish), Iran’s most feared enemy that has little if anything to do with Lebanon.

Chiming in are yet more Israeli officials making the case that war with Hezbollah will almost certainly shift momentum in the U.S. Congress decisively against the pending nuclear deal with Iran—a deal that critics say will increase Iran’s maneuverability in the region, including its support for Hezbollah. The idea being that war with Hezbollah might be a positive game changing development to undermine the current majority support in Congress and the American public a majority of who currently back a US-Iran nuclear deal.

The case for military action against Hezbollah was recently made also by the anti-Arab, Palestinian-loathing Dore Gold, who is close to Netanyahu and was just appointed director general of the Israeli Foreign Ministry. Accusing the UN of having failed to stop Hezbollah, Gold argues that “Either the IDF will have to destroy the weapons now being stored in southern Lebanon, or let Hezbollah fire thousands of rockets into Israel. What would you do?”

On May 12, the New York Times reported that Israeli is preparing for “what it sees as an almost inevitable next battle with Hezbollah.” An Israeli official added “We will hit Hezbollah hard.”

If so, it wouldn’t be the first time that an Israeli confrontation with Hezbollah would be motivated by the hope that war with Iran was looming. During the July 2006 Zionist invasion of Lebanon, which as Aurélie Daher reminds us caused more than 1,200 civilian deaths, 4,400 injuries, 200,000 people rendered homeless and more than 25% of the population displaced, Israel’s then-Deputy Defense Minister Ephraim Sneh announced that the Lebanon war was all about Iran: “War with Iran in inevitable. Lebanon is just a prelude to the greater war with Iran.” Sneh timing was off, but as Trita Parsi and Paul Pillar have suggested, an Israeli war this summer would likely assure that, despite Obama’s efforts, US-Iran peace is beyond Obama’s reach.

Some in Lebanon and Washington believe that Israel may attack Hezbollah in Qalamoun as well as South Lebanon. Israel already bombed Qalamoun twice in April 2015.

Were Iranian troops in Syria to intervene directly on behalf of Hezbollah in Qalamoun, Nicholas Saidel, Associate Director of the Institute for Strategic Threat Analysis & Response (ISTAR) at the University of Pennsylvania argues that this escalation would likely lead to mission creep, and an eventual war between Iran and Israel, and quite possibly an Israeli attack on Iran’s nuclear facilities.

Meanwhile, the Zionist regime and some of its US lobby are arguing that “once Obama leaves office next year and a purebred 100% American patriot is in the Oval Office things can finally be put right in this region and we will knock some heads.”

And if anyone is still alive, in the words of wisdom from Alan Dershowitz, “We can let Allah sort it all out.”