FIFA Scandals Are Worse than Bribes 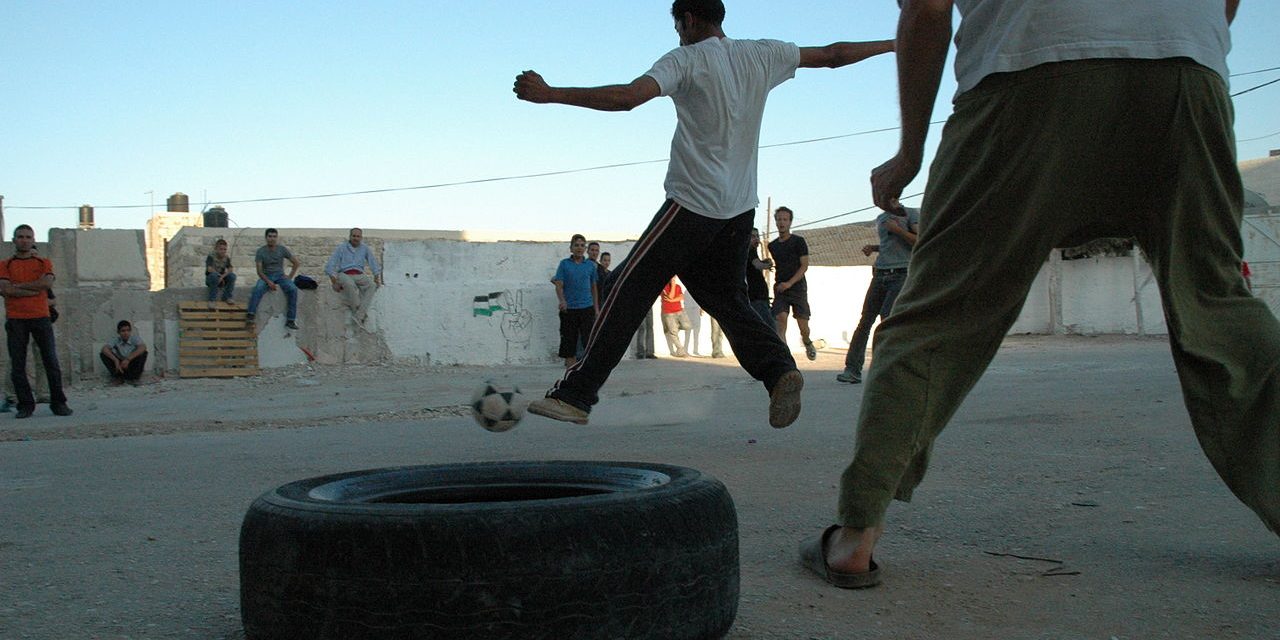 Palestinians are inspirational in their perseverance in the face of a long litany of unspeakable abuses that would have broken the will of many peoples.

Lost in the heavy clouds cast by the spectacular FIFA corruption disclosures climaxing so far with the resignation of its compromised president, Sepp Blatter, is a worse scandal of racist discrimination that has so far been flying beneath the media radar. Blatter, with customary wheeling and dealing, did his best to protect Israel from long standing Palestinian grievances—physical harassment of Palestinian players and teams by long delays and arbitrary restrictions on movement, an indulgent attitude toward the hateful baiting by Beitar Jerusalem threateningly yelling ‘death to the Arabs’ as a warning to Palestinian players, and inclusion of teams from the unlawful settlements competing in Israel soccer leagues violating FIFA’s own rules. The Palestinian Soccer Association was persuaded by Blatter to drop its charges, with a renewal of previously empty pledges to ameliorate conditions confronting Palestinians coupled with a surely ironic plea to keep ‘politics’ from intruding on ‘the beautiful game.’ As if the humiliations and constraints imposed on the Palestinian teams were not political!

Without recounting the details, I would make reference to three assertions that are markers for the moral imagination in relation to this provocative interplay of sport and politics in situations of acute oppression and criminality. The first assertion is by the mild mannered president of the Palestinian Soccer Association, Jabril Rajoub: what Palestinians face is worse than what South African blacks faced in the apartheid era—“There they wanted them to be slaves. But here in Palestine, they don’t want us to be.” [Quoted in Rudi Rodoven, “Palestinian Soccer Association Drops Effort to Suspend Israel from FIFA,” New York Times, May 29, 2015.] Whether there is objective confirmation of such an attitude or not on the Israeli side, this Palestinian subjectivity is widely experienced, and is certainly confirmed by the tactics and language of right-wing Israelis who increasingly control the political and moral space in the country. There is much public and legal attention right given to establishing genocidal intent, but rarely is there notice paid to the ways acute oppression and racism is experienced by the victimized community.

Mr. Rojoub’s cry of torment reminded me of Audre Lorde’s poem, ‘Litany for Survival’ that was frequently quoted a year ago in the days after the Ferguson killing of Michael Brown to express a similar subjectivity prominent among African-Americans. Counseling her people to speak their true feelings even if it produced angry pushback, the last lines of Lorde’s poem resonate with those anguished words of Jabril Rajoub quoted above:

but when we are silent we are still afraid

So it is better to speak remembering

we were never meant to survive

It is a sad truth confirmed over and over again in tragedy after tragedy that those who are dispossessed, subjugated, and displaced are never meant to survive, and thereby finally erased altogether from the consciousness of those who do the dispossessing, subjugating, and displacing. It took a strong dose of revisionist history to challenge generations of delusion that allowed children in America to celebrate Columbus Day without pausing to wonder what tears flowed in native American communities that were never meant to survive.

From such a reflection, the mind moves without pause to the sentiments often captured in early self-serving Zionist musings about ‘a country without a people for a people without a country.’ Perhaps the most memorable formulation was that of Chaim Weizman in 1914 at the World Zionist Congress: “[T]here is a country which happens to be called Palestine, a country without a people, and on the other hand, there exist the Jewish people, and it has no land. What else is necessary than to fit the gem into the ring, to unite this people with this country?” Remember that such malicious falsehoods were uttered long before the name of Hitler was even known, much less Naziism or the Holocaust experienced. This assertion was made even a few years before the infamous Balfour Declaration alerted the world to British colonial support for the establishment of a Jewish national home in Palestine. It is worth noting that Palestine was inhabited at the time by well over a half million Palestinian Arabs, of whom less that 7% were Jews, and many of these were then opposed to the Zionist project as disruptive of their mostly calm co-existence with the Arab majority.

What do these three laconic reflections on the relations between perpetrators and victims tell us? As Rajoub implies, the presence of the slave, however much abused, is wanted, even deemed necessary, as the prevailing social and economic arrangements depend on such exploited labor. As the unfolding South Africa overcoming of apartheid disclosed, at some point, because there is a deformed kind of mutuality between master and slave, when the underlying balance shifts, a previously unimaginable accommodation abruptly becomes attainable.

But when the primary stake is land, not labor, then erasure is the goal of the perpetrator and the justifiable fear of the victim is extinction, or at least, exclusion. Fortunately, in our modern world these polarized subjectivities are not acted out to their full extreme except in the most monstrous of scenarios such as the fate that befell European Jewry in the period of Nazi hegemony. Yet even if not literalized there are objective consequences of the illusion that the other doesn’t exist or should be induced quietly to disappear. In the emergence of Israel, the Zionist momentum shifted the site of struggle from the imaginary of emptiness to the battlefields of dispossession inflicting the traumas of the Nakba and Naksa, and without an end in sight.

What has so far been distinctive, even inspirational, about Palestinian perseverance is their refusal to leave the historical stage despite enduring a long litany of unspeakable abuses that would have broken the will of many peoples. We cannot know the future by peering through such ‘a glass darkly,’ but more and more people throughout the world are becoming aware that solidarity with the ongoing Palestinian struggle for political oxygen is the most salient and compelling moral cause of our time.

In the aftermath of Netanyahu’s electoral victory in March David Shulman writes movingly and enigmatically of the unsustainability of the status quo: “Perhaps hope lies in a vision of all territory west of the Jordan River as somehow more than one state but less than two, under conditions of true equality… One thing is certain. The demand to fully enfranchise the Palestinians now suffering under Israeli rule will eventually prove irresistible. What happens after that, no one can say.” [Shulman, “Bibi: The Hidden Consequences of His Victory,” New York Review of Books, April 23, 2015.] Even such a somewhat hopeful prospect is insufficient to render justice to the Palestinians as it leaves out of account the more than 7 million Palestinians living in refugee camps or exile; in many instances, their circumstances are as desperate, or even more so, than that of Palestinians living in utter vulnerability beneath the yoke of prolonged occupation.