'Austerity' is well worth the read—clear and concise while avoiding the use of economic jargon.

Austerity: The Demolition of the Welfare State and the Rise of the Zombie Economy. Kerry-Anne Mendoza. New Internationalist, Oxford, U.K., 2015.

Of the many works on economics and finance available over the last several years, Austerity is by far the clearest and most concise presentation on how the concept of austerity operates. Essentially it is nothing but corporate takeover of the governance of the world.

The results of the rising corporate governance are rising inequality within nations, loss of freedoms, civil liberties and human rights. It includes political manipulations denigrating immigrants, the working poor and others requiring social assistance, ethnic and religious intolerance, all to be blamed for why the economy is no longer working well when it is really the neoliberal policies that are to blame.

The focus of the book is the United Kingdom. It clearly outlines how the National Health Service and the education sector have been seriously affected by the corporatization (privatization or outsourcing) of many formerly public functions have led to increased costs, corruption, fraud, and gross inefficiencies and ineffectiveness in service.

In order to protect the corporate world, many laws have been made that circumvent or undermine basic human rights of privacy, freedom of assembly, detention without charges, et al. Mendoza highlights her comments with specific examples that highlight the absurdity and the oppressive nature of many of these acts. 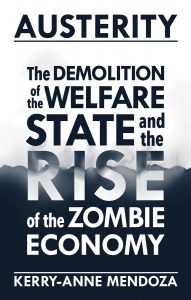 Historically she gives a brief outline beginning with the Bretton Woods Agreements made during World War II when U.S. corporate ideology became paramount. The work passes through the era of IMF//World Bank Structural Adjustment Programs (SAPs) that created many countries indebted to the western financial system and harmed much of the affected countries agricultural and nascent industrial components.

It concludes with the current “negotiations”—really a lack thereof as the corporate bosses/lawyers/MBAs are writing the agreements out of public sight/democratic scrutiny – concerning the TTIP (Atlantic) and TTP (Pacific) financial agreements that create corporate rule over sovereign national rules.

There is a whole lot more that could be said if Mendoza had wanted to bring in the bankers, and the military-corporate liaisons, but Austerity does very well without those components. This short work is well worth the read—clear and concise while avoiding the use of the economic jargon that readily hides the real intentions of the corporate world. It is a well-focused work, long enough to make a clear argument, short enough and plain enough to be a very accessible read for anyone.