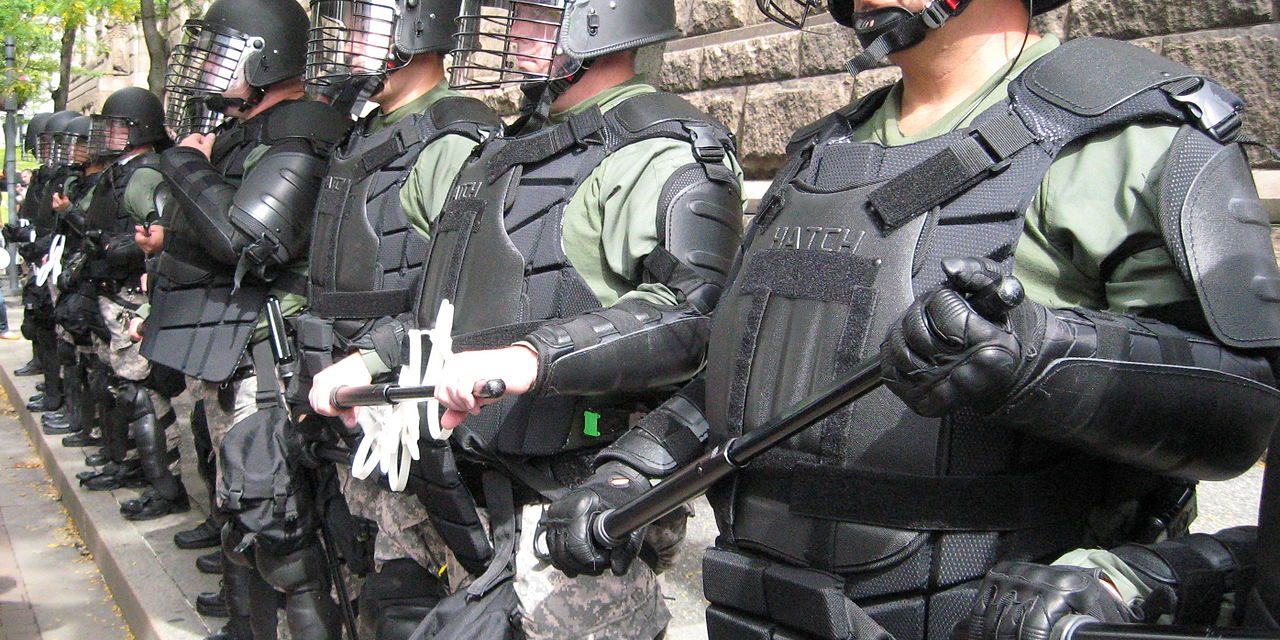 At least twice as many Americans have been killed by police since 9/11 as were killed in the terrorist attacks.

In the years since 9/11, American police alone have killed at least twice as many Americans as died in that single large event, the annual toll of police killings being somewhere between 500 and 1,000, the variation owing to many such events going inaccurately reported by police.

Let’s get a rough total estimate of what has happened to Americans from these causes in the time since 9/11. Just using the low number in each case for fourteen years, 7,000 Americans were killed by their own police, 420,000 were killed by something parked in their garage, 210,000 were murdered by fellow citizens, 1,400,000 were killed by friendly family doctors, and there were 560,000 who just decided to pack it in for one reason or another. The total of these various causes of death rounds to 2, 600,000 deaths, nearly 867 times the number of Americans killed in 9/11, 867 collapsed sets of twin towers, nearly 62 collapsed sets of towers per year.

So why are we spending countless billions of dollars fighting terror, an almost insignificant threat to our well-being? We spend a total by various estimates of between 1 and 5 trillion dollars (yes, that’s trillion with a “t”), although such totals can never accurately be given owing to secrecy, false accounting, and the immense waste that is an inherent part of all military and intelligence operations. Even in the crudest military terms of “bang for the buck,” ignoring all the death and destruction and ethical issues, just as the military routinely does in its grim work, the War on Terror has to be the greatest misdirection of resources in all of human history.

Or is it? Perhaps there are other reasons for the War on Terror, reasons never discussed in newspapers or on news broadcasts, reasons which make the expenditure of such colossal amounts against such an insignificant risk acceptable to those doing the spending? Unless American leaders are all lunatics, I think there must be.

Most people are aware that the War on Drugs has been a stupendous flop, with a great deal of resources having bought nothing except a general diminishment of personal freedoms, construction of new prisons, and make-work employment for many unnecessary police and prison guards. But each year the War on Terror spends many, many times the amount spent on the War on Drugs, and what has it bought us? A far greater debasement of freedoms, almost wiping clean parts of the Bill of Rights, raising to a high status in our society such dark and anti-democratic forces as security agents of every kind and the military, increasing exponentially the secrecy of government and thus giving voters no hope for an informed ballot, making countless future enemies in the world, and causing Americans willy-nilly to support filthy acts identical to the hateful work of military juntas who made tens of thousands of civilians disappear.

I think there are only a couple of explanations for this waste of resources which otherwise employed could have made the world an immeasurably better place. They are assisted greatly by what I’ll call the “crime in the news” effect, although I might just as well call it the “advertising effect,” because advertising works on people’s minds through its seeming omnipresence and repetition planting suggestions, suggestions not entirely different to those planted by the stage-performer hypnotist in the minds of his volunteers from the audience.

It has been demonstrated many times that daily reports of violent crime, even when the crimes occur outside a listening community, cause people to become apprehensive about many ordinary activities such as letting kids walk to school or go to the park to play. And no advertising campaign in history could begin to compare to the complete audience saturation of “terror this or that” in our newspapers, magazines, and on-air. Surely, no totalitarian government ever more completely blanketed its people with fearful suggestions than does America’s “free press” today. You literally cannot hear a news broadcast or read a newspaper with the word terror missing, a fact which keeps most people in an unquestioning frame of mind about what properly should be regarded as sinfully immense expenditures to no useful purpose, at the same time conditioning them to surrender precious freedoms. For most people, the fact is that fear overcomes both logic and courage.

Americans, along with people in other lands heavily under American influence, have voluntarily given up claims to what we believed were well-established rights. Yes, there is some controversy over the high-tech equivalent of Big Brother’s telescreens, over the construction of immense new or expanded agencies such as the TSA and NSA, and even some over a seemingly-endless set or wars, but much less than you might have expected. There has been relatively little controversy over America’s smashing its adherence to everything from the Geneva Conventions to the Universal Declaration of Human Rights, and the complete disregard for established basic principles of common law in America’s international behavior goes largely unremarked, at least in America.

In a very real sense, America’s establishment, its government within the government consisting of leaders in security and the military and of its great corporations, has been given license to create a kind of Frankenstein monster which now stands ready with terrible powers to do its bidding. It certainly isn’t just terrorists who need fear, it is every person with the impulse in his or her breast for justice, fairness, and human decency, and it is every country which has an impulse for independence from America’s imperious declarations of how they should carry on their affairs. I don’t like the expression New World Order, but it does in fact communicate something of what has been pursued relentlessly by America’s establishment since 9/11 with an unbounded sense of its entitlement and privilege. The awesome creature it has brought to life – which already runs secret prisons, tortures, conducts non-judicial killings, and supports horrible governments in many places – is no respecter of principles or human rights or even basic decency. We all know from history and common experience that over time any well-funded, established, and privileged institution grows, altering the terms of its charter and spreading its influence always farther, just as today American intelligence, bound by charter not to spy on Americans, spies on them all the time through various technical arrangements effectively going around its charter.

This monster serves ambitions abroad – crush democracy anywhere it proves inconvenient or a barrier to the interests of America’s establishment, as in Ukraine and in Egypt and as attempted in Venezuela, but also crush old arrangements which have produced advancing societies in other lands, even though they are not yet democratic, as in Syria, Iraq, or Libya.

In a relatively short time the monster has made a chaotic wasteland of such previously prosperous lands as Iraq and Libya, and it is now hard at work doing the same to the lovely, ancient land of Syria where it is allied in its efforts with some of the ugliest violent fanatics you could hope to find anywhere. Its acts have resulted in many hundreds of thousands of deaths in these places, countless refugees and injuries, the destruction of much precious infrastructure, and left people to wallow in chaos for years to come.

It created a coup, and thereby a civil war, in Ukraine, reducing that impoverished land still further, and it allied itself for the effort with the kind of stormfront militia trash that even the pathetic FBI surely would infiltrate and investigate were they active in the United States. It did all this just to gain temporary psychological advantages over Russia, a country whose leadership today far better represents principles of international peace and good order – not without some distant echo of irony for those of us raised on a steady diet of Cold War propaganda – than those in Washington who never stop mouthing slogans about rights and democracy which they routinely ignore. We all have an immense investment in America’s reckless game of “playing chicken” with Russia, the only country on the planet capable of obliterating most of Western civilization. I’ve never liked frat-boy pranks and humor, but in this case the overgrown frat-boys at the CIA are guffawing over stupidities which risk most of what we hold precious.

But the monster serves also to intimidate America’s own population. Don’t hold big or noisy demonstrations against injustice, don’t complain too much about authorities and truly abusive police, don’t communicate with others who may be viewed as undesirables for whatever reasons by the government, and don’t describe any group which has been arbitrarily-declared terrorist as being merely freedom fighters – any of these acts or many others risks arbitrary powers that never formally existed before.

Homeland Security has stocked huge amounts of crowd-control equipment and weapons, and it was a military general who quietly announced a few years back that the Pentagon was prepared should martial law became necessary in America. America’s local police forces, long ago having earned an international reputation for violent, militaristic behavior, have been given surplus military-grade crowd-control equipment. The FBI seeks new authorities and capabilities regularly, the same FBI with such a sorry record, going back to its origins, of abusing authority.

In my mind, and I think in the minds of many, America’s posture towards the world resembles a pug-ugly bully confronting you on the street, someone who just will not let you pass until you give him what he demands. The bully is the country’s immensely wealthy and influential privileged establishment, having the country’s general population now completely in tow, fearful and intimidated, quite apart from being in large part underemployed or unemployed. The bully naturally pays no attention to international organizations and agreements, believing himself above the rules and constraints to which others hold. The organizations are either simply ignored or, as in the case of the UN, coerced into behaving along acceptable lines, America having spent some years recently refusing to pay its legally-required dues just to prove a point as well as having been involved in more than one cabal to unseat a disliked Secretary General.

And I fear this gives us just a hint of what is likely to come because, as we should never stop reminding ourselves, “Power corrupts and absolute power corrupts absolutely.”

The world’s hope for relief from a form of international tyranny comes from the growth of countries like Russia, China, India, and Brazil. I wish I could add the EU to the list, but it seems almost as supine and voiceless as America’s own general population or Canada’s present government. Only forces capable of saying “no” to America’s establishment and building interest blocs to oppose its excesses offer redress and relief in future, and it is only through political contention that new international organizations are likely to emerge, ones with some power and effect. Americans all give lip service to competition in economics, but the concept applies no less to the spheres of politics and world affairs. And Americans all give lip service to democracy, not realizing that its governing elites represent the tiniest fraction of the world’s population and resemble in their acts abroad about as aristocratic a government as ever existed.