Will 2015 Be a Game Changer for the Israel-Palestine Conflict?

In 2014, two events laid the groundwork for a collapse of the status quo.

After over 60 years of conflict between Arabs and Jews in Israel/Palestine and over 20 years of political gridlock during the so-called Oslo Peace Process, conditions and events on the ground may be coming together to bring about significant changes in 2015. 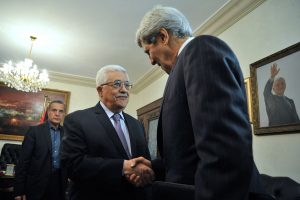 Palestinian Authority President Mahmoud Abbas greets U.S. Secretary of State John Kerry as he arrives for a meeting in Amman, Jordan, on June 29, 2013. (US Department of State)

In 2014, two events laid the groundwork for these changes. First, the horrific Israeli war on Gaza, which killed over 2,000 Palestinians, most of whom were women and children, and which brought complete devastation to the infrastructure in Gaza, significantly altered the views of both the Palestinians and the international community at large, about the nature of this intractable conflict.

Second, the Palestinian Authority (PA) under President Mahmoud Abbas finally decided not only to talk and to issue threats about internationalizing the conflict, but also to actually take some action. These events, combined with the changing political situation within the major players—Israel, Palestine, the U.S. and the EU—have resulted in a much different political landscape.

The devastation and humanitarian crisis resulting from the Gaza War has united Palestinians, if not their leaders, not only in Israel/Palestine, but also in the diaspora. Within the international community, particularly in Europe, the devastation wrought on a trapped, defenseless population by the self-proclaimed “Jewish State”, has contributed to an increase in not only anti-Israel sentiment, but also anti-Semitism among the general population.

Within the international Jewish community, a population long supportive of human rights, criticism of Israeli government behavior and support for boycott, divestment and sanction (BDS) of Israel is becoming more common and vocal.

Organizations such as Jewish Voice for Peace (JVP), a U.S.-based group which advocates for “peace, social justice, equality, human rights, respect for international law, and a U.S. foreign policy based on these ideals”, has seen its membership, contributions and influence grow enormously.

The PA, seeing 20 years of fruitless negotiation go nowhere, faced with choices of living with ongoing occupation, pursuing a Palestinian state on the international stage or violent resistance, has finally decided to pursue statehood and membership in international organizations through the UN.

The U.S., under Israeli pressure, has attempted to thwart this effort at every turn, several times vetoing resolutions that reflect its own policies.

Despite strong U.S. opposition, the PA has achieved Non-member State status in the UN and in April 2015 will become a member of the International Criminal Court (ICC), a status which will allow it to bring war crimes charges against Israel as well as restrain its own ability to use violence against civilians to achieve its political goals.

The U.S. and Israeli response to these actions has been to threaten to cut off funding to the PA. Israel has begun to withhold payment of tax revenues that it collects on behalf of the PA in accordance with agreements under the Oslo accords. U.S. law mandates a cutoff of aid to the PA should it bring a legal case against Israel in the ICC, and legislation has already been introduced in Congress to cut off all aid.

These two sources of funding make up a significant portion of the PA budget. In past instances of a cutoff of funds, the oil rich Gulf States have made up the difference. In today’s environment of low oil prices, an environment that is already straining budgets in the Gulf States, such a rescue is unlikely.

Should the funding cutoff continue for a period of time resulting in non-payment of salaries, a collapse of the PA is a likely outcome. This would end PA security cooperation with Israel, forcing Israel to bear the entire burden and cost of maintaining security, straining an already stretched Israeli budget situation.

On the domestic political side, Prime Minister Netanyahu’s unstable governing coalition has collapsed and snap elections have been scheduled for March. While any significant change in government policy is unlikely after the elections, the faces will almost certainly change.

In Palestine, President Abbas, an unelected leader, is nearing the end of his run and is thinking about his legacy. He will find it difficult to back down.

In the U.S., the Obama administration, having failed in two efforts to mediate the conflict, having maintained a staunch pro-Israel position throughout, faced with a hostile Congress and a lame duck status, seeing the PA move the issue to the UN, has lost all ability to influence the outcome. Obama is unlikely to wade into this quagmire again.

While nothing is certain in this fluid environment, it seems that major shifts are likely. Whether or not they are positive remains to be seen.