Aleppo’s Synagogues Have Not Been Destroyed

Outside the Samoual Synagogue in the western district of Aleppo, SYRIA — Given the massive destruction in large parts of Aleppo, Syria’s former economic juggernaut near the Turkish border, including in the city’s Medina souk and Industrial zone, claims of even more dire damage to Syrian heritage sites would perhaps be understandable—even if not backed up with probative material evidence and sometimes made for political purposes by opponents of Syria’s government. 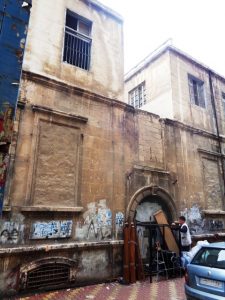 Outside the Samoual Synagogue in the Western District of Aleppo, December 13, 2014. (Photo courtesy of the author.)

In the wake of the continuing conflict, questions from some quarters have repeatedly surfaced regarding the status of the 5th or 6th century Byzantium period, Great Synagogue of Aleppo. Known locally as Joab’s Synagogue or Al-Bandara Synagogue, lore has it that the building’s foundation was laid by King David’s general, Yoav, whom Jewish tradition holds captured Aleppo. Maimonides, in his letter to the rabbis of Lunel, speaks of Aleppo as being the only community in Syria where Torah learning survived.

The Times of Israel reported on October 16, 2012 that “Aleppo, once a trading center for Muslims, Armenians and Syrian Christians, was also home to one of the world’s oldest Jewish communities with its Great Synagogue which is now destroyed.” One of the US-based anti-Arab Zionist organizations, the notorious Anti-Defamation League (ADL) claims that the Synagogue was bombed by the Syrian army with similar false reports being circulated via politically motivated Internet conspiracy theories.

Another writer for the Jewish Times lamented: “While we continue to hear of the damage inflicted on Aleppo, it is almost unfathomable what is happening to its treasure trove of Jewish antiquity and Synagogues within its borders.” Claims have been made that Syrian government barrel bombs destroyed the cultural heritage site nearly two years ago.

These accusations and statements are patently false.

Susan Harris wrote in November of 2012 about massive damage in Syria to Jewish heritage sites, including in Aleppo, but without offering specific data, the author implied a frenzy of anti-Semitism: “Not only are the antiquities of Islam being destroyed, but a site of great interest to Jews sits in the eye of a hurricane swept in by the Arab Spring. For hundreds of years the Great Synagogue of Aleppo was the home to the Aleppo Codex, written around 930 CE.” And that it was caught up in “A labyrinth of medieval Jewish structures recently set ablaze, and the last fragile structural remnants of earlier civilizations crumbling into ash heaps under the weight of prolonged violence.” This statement is also false. The Codex has not been burned.

Articles and alarmist propaganda on the subject of Aleppo’s synagogues have appeared with titles like “What’s left of Jewish Heritage in Syria”, “Who will save the remains of Syria’s ancient synagogues?” (JTA), “Jewish Aleppo, Lost Forever The Syrian diaspora in Israel watches its once-vibrant ancestral home fall to ruin in the country’s civil war” (Joseph Dana, August 22, 2012). They are all misleading. 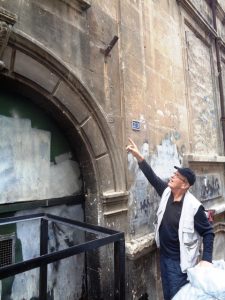 Outside the Samoual Synagogue in the Western District of Aleppo, December 13, 2014. (Photo courtesy of the author.)

There have, however, been thefts of Syrian cultural artifacts—most of them have been done by agents of Israel. During a 10-year period in the 1980s, a collection of Jewish objects were stolen and smuggled out of Syria to Turkey by then-Chief Rabbi Avraham Hamra. The collection included nine ancient Bible manuscripts, known as the Ketarim, each between 700 and 900 years old. In addition, there were 40 Torah scrolls and 32 decorative boxes in which the Sephardic Torah scrolls were held. Israel offered a bizarre rationale that the thefts of antiquities belonging to Syria were “necessary because official requests for permission to take them out of Syria were denied”. Were this excuse to be accepted, our global heritage in Syria and elsewhere would likely soon disappear.

Another theft of Syrian cultural heritage is The Aleppo Codex, believed to be the oldest manuscript containing the entire Hebrew Bible. It was stolen from the Great Synagogue of Allepo, according to locals, by the Mossad, and in1957, it was smuggled out of Aleppo to Israel, where it was presented in 1958 to President Yitzhak Ben-Zvi and is today housed in the Ben-Zvi Institute. The Aleppo Codex, part of Syria’s cultural heritage, is considered by some experts to be the most authoritative, accurate source document, both for the Biblical text and for the vocalization and cantillation. Some scholars claim in has greater religious and scholarly import than any other manuscript of the Bible.

Unbeknownst to the thieves, 295 of the original 487 leaves of the Codex remain in Aleppo near the grand synagogue, protected by a Syrian gentleman who was a volunteer caretaker and groundskeeper of sorts for many years. Apparently, when the thieves pried open the vault underneath the basilica’s basement floor, they failed to notice a cloth wrapping underneath what they stole or that the Codex had been divided for apparent study. The people of Syria and all who value cultural heritage await the return of the looted Codex from its thieves.

For over a week, earlier this month, with the much appreciated assistance of security personnel, this observer moved around Aleppo visiting endangered archeological sites in order to chronicle some of them as part of a two-year research project across this cradle of civilization. Field visits and testimony of neighbors near Aleppo’s 11 synagogues present probative evidence that while they, as with many sites in Aleppo and elsewhere, are currently endangered, as of mid-December 2014, these places of worship, which are a valued part of Syria’s cultural heritage, are locked and secured; they do not exhibit signs of vandalism and are being watched over by authorities and by Syrian citizens in their respective neighborhoods.

With respect to the Great Synagogue of Aleppo, although situated in the district of the current front-line separating rebel from government forces, it has not been destroyed and as of December 16 shows no signs of damage. The may be partly due to the fact that both sides have been widely criticized for endangering Syria’s heritage and, with the exception of Daash (IS) appear to be taking greater care these days in selecting “military targets.” Another reason may be because the Great Synagogue is located on a side street of little apparent strategic import that has experienced no armed conflict. As recently as two decades ago, it was in use until Aleppo’s remaining Jews left and as with other Jewish sites in Aleppo and across Syria, including cemeteries, schools and communal properties are now under government protection.

Rather than destroy Jewish heritage in Syria her government and people have preserved and repaired them when necessary. As of mid-December 2014, only 13 Jews remain in Aleppo, according to Rabbi Avraham Hamra, with nine men and eight women all over sixty years of age. One of the last to depart Aleppo was Dr. Haim Cohen, a general practitioner who lived down the street from the Samoual Synagogue which this observer visited on December 11. Dr. Cohen used to frequent a shop across from the entrance to the Samoual Synagogue, which I also visited, and according to the shop owner, who has been in the same location for 47 years and whose main work these days includes the mending of piles of military uniforms, there has been no damage to Synagogues in the Governorate and certainly not to the Great Synagogue of Aleppo.

In February of 2011, coincidentally the month before of the beginning of the current Syrian crisis, President Assad signed an executive order to repair the Al-Raqi Synagogue in the old Jewish quarter of Damascus by the end of the month, as the renovation of 10 other synagogues in Syria’s major cities continued. On December 11, this observer photographed some randomly selected Aleppo Synagogues, including the one in the Samoual district, and found them locked and saw no signs of desecration. Rather, normal citizens exhibit protective attitudes toward these heritage sites and even tend to keep the outside areas cleared of leaves and trash. Government workers also perform daily trash pickups along streets where the Synagogues are located. Officials advised this observer that Syria sees the rebuilding of Jewish Damascus and repairs to Synagogues across Syria in the context of preserving the secularism of Syria and its culture heritage, of which Jews were historically an important part.

Two months before the President signed the executive order to repair synagogues, Malcolm Hoenlein, executive vice chairman of the Conference of Presidents of Major American Jewish Organizations, discussed the Jewish synagogues and cemeteries in Syria and reported that he received a “very positive response from Assad.” Syria Jews centered mainly in Brooklyn NY whose numbers are estimated at 85,000, maintain close ties with Syria. Some of them visit their birthplaces and conduct regular business relations in the country often experiencing criticism and pressure from the Zionist regime still occupying Palestine.

In November 1989, the Syrian government facilitated the emigration of 500 single Jewish women, who greatly outnumbered eligible Jewish men in Aleppo. During the 1991 Madrid Peace Conference, Syria agreed to ease restriction on its Jewish population. As a result, Syria lifted many restrictions on its Jewish community, and allowed Jews to leave on condition that they not emigrate to Israel. Beginning on the Passover Holiday of 1992, more than 4,000 remaining members of the Aleppo and Damascus Jewish community were granted exit permits, and within a few months, thousands more left for the United States, France, or Turkey. Approximately 300 remained in Syria, most of them elderly, all choosing to stay in the culture their families had lived in for many generations.

With the dawning of the 21st century, there was only a small, largely elderly community left in Aleppo. Jews were still officially banned from politics and government employment and did not have military service obligations. Jews were also the only minority to have their religion mentioned on their passports and identification cards. Though some were occasionally subjected to harassment by Palestinian protesters during violence in occupied Palestine, the Syrian government took measures to protect them. The government protected Jewish primary schools for religious studies, and Hebrew was allowed to be taught (today Hebrew is one of the languages SANA, the Syrian News Agency, presents its news item in). Every two or three months, a rabbi from Istanbul visited Aleppo to oversee the preparation of kosher meat, which most residents froze and used until his next visit.

The community gradually shrank. From 2000 to 2010, 41 Syrian Jews left for occupied Palestine, and its numbers further dwindled as members of the largely elderly community died. In 2001, Rabbi Huder Shahada Kabariti estimated that there were still 200 Jews in the country, of whom 150 lived in Damascus, 30 in Aleppo, and 20 in Qamashli. In 2003, the Jewish population was estimated to be fewer than 100. In 2005, the U.S. State Department estimated the Jewish population at 80 in its annual International Religious Freedom Report. In May 2012, one year into the Syrian civil war, it was reported that only 22 Jews still lived in Syria, all of them elderly and living in Damascus, in a building adjoining the city’s only functioning synagogue. This report was not accurate. As of December 2014, approximately 15 Jews remain in Aleppo, according to Rabbi Avraham Hamra, with nine men and eight women all over sixty years of age.