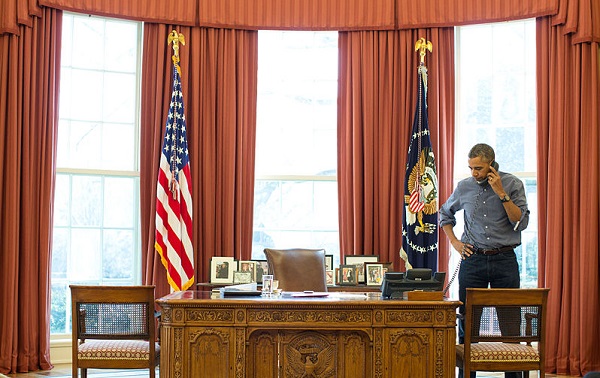 The new sanctions against Russia announced by Washington and Europe do not make sense as merely economic measures. I would be surprised if Russian oil and military industries were dependent on European capital markets in a meaningful way. Such a dependence would indicate a failure in Russian strategic thinking. The Russian companies should be able to secure adequate financing from Russian Banks or from the Russian government.  If foreign loans are needed, Russia can borrow from China.

If critical Russian industries are dependent on European capital markets, the sanctions will help Russia by forcing an end to this debilitating dependence.  Russia should not be dependent on the West in any way.

The real question is the purpose of the sanctions.  My conclusion is that the purpose of the sanctions is to break up and undermine Europe’s economic and political relations with Russia. When international relations are intentionally undermined, war can be the result.  Washington will continue to push sanctions against Russia until Russia shows Europe that there is a heavy cost of serving as Washington’s tool.

Russia needs to break up this process of ever more sanctions in order to derail the drive toward war.  In my opinion this is easy for Russia to do.  Russia can tell Europe that since you do not like our oil companies, you must not like our gas company, so we are turning off the gas.  Or Russia can tell Europe, we don’t sell natural gas to NATO members. Or Russia can say, we will continue to sell you gas, but you must pay in rubles, not in dollars.  This would have the additional benefit of increasing the demand for rubles in exchange markets, thus making it harder for speculators and the US government to drive down the ruble.

A Russian response to Washington would be to stop selling to the US the Russian rocket engines on which the US satellite program is dependent.  This could leave the US without rockets for its satellites for six years between the period 2016 and 2022.

Possibly the Russian government is worried about losing the earnings from gas and rocket engine sales.  However, Europe cannot do without the gas and would quickly abandon its participation in the sanctions, so no gas revenues would be lost.  The Americans are going to develop their own rocket engine anyhow, so the Russian sales of rocket engines to the US have at most about six more years.  But the US with an impaired satellite program for six years would mean a great relief to the entire world from the American spy program.  It would also make difficult US military aggression against Russia during the period.

Russian President Putin and his government have been very low-key and unprovocative in responding to the sanctions and to the trouble that Washington continues to cause for Russia in Ukraine. The low-key Russian behavior can be understood as a strategy for undermining Washington’s use of Europe against Russia by presenting a non-threatening face to Europe.  However, another explanation is the presence inside Russia of a fifth column that represents Washington’s interest and constrains the power of the Russian government.

Saker describes the two power groups inside Russia as the Eurasian Sovereignists who stand behind Putin and an independent Russia and the Atlantic Integrationists, the fifth column that works to incorporate Russia in Europe under US hegemony or, failing that, to help Washington break up the Russian Federation into several weaker countries that are too weak to constrain Washington’s use of power.

Russia’s Atlantic Integrationists share the Brzezinski and Wolfowitz doctrines with Washington.  These doctrines are the basis for US foreign policy.  The doctrines define the goal of US foreign policy in terms of preventing the rise of other countries, such as Russia and China, that could limit Washington’s hegemony.

Washington is in a position to exploit the tensions between these two Russian power groups. Washington’s fifth column is not best positioned to prevail.  However, Washington can at least count on the struggle causing dissent within the Eurasian Sovereignists over Putin’s low-key response to Western provocations.  Some of this dissent can be seen in Strelkov’s defense of Russia and more can be seen here.

Russia, thinking the Cold War ended with the collapse of the Soviet Union, opened herself to the West.  Russian governments trusted the West, and as a result of Russia’s gullibility, the West was able to purchase numerous allies among the Russian elites. Depending on the alignment of the media, these compromised elites are capable of assassinating Putin and attempting a coup.

One would think that by now Putin’s government would recognize the danger and arrest the main elements of the fifth column, followed by trial and execution for treason, in order that Russia can stand united against the Western Threat.  If Putin does not take this step, it means either that Putin does not recognize the extent of the threat or that his government lacks the power to protect Russia from the internal threat.

It is clear that Putin has not achieved any respite for his government from the West’s propaganda and economic assault by refusing to defend the Donbass area from Ukrainian attack and by pressuring the Donetsk Republic into a ceasefire when its military forces were on the verge of a major defeat of the disintegrating Ukrainian army.  All Putin has achieved is to open himself to criticism among his supporters for betraying the Russians in eastern and southern Ukraine.

The European politicians and elites are so deeply in Washington’s pocket that Putin has little chance of courting Europe with a Russian show of good will. I have never believed that this strategy could work, although I would be pleased if it did.  Only a direct threat to deprive Europe of energy has a chance of producing within Europe a foreign policy independent of Washington.  I do not think Europe can survive a cutoff of the Russian natural gas. Europe would abandon sanctions in order to guarantee the flow of gas.  If Washington’s hold on Europe is so powerful that Europe is willing to endure a major disruption of its energy supply as the price of its vassalage, Russia will know to cease its futile attempts at diplomacy and to prepare for war.

If China sits on the sidelines, China will be the next isolated target and will receive the same treatment.

Washington intends to defeat both countries, either through internal dissent or through war.

Nothing said by Obama or any member of his government or any influential voice in Congress has signaled any pullback in Washington’s drive for hegemony over the world.

The US economy is now dependent on looting and plunder, and Washington’s hegemony is essential to this corrupted form of capitalism.