Vietnam: How I Almost Bought the Reunification Palace 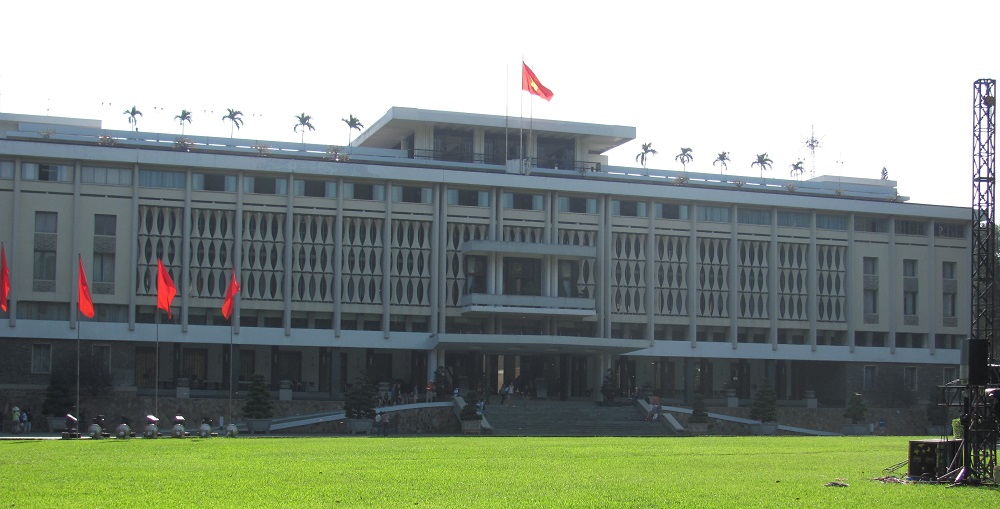 At 8:00 a.m., a waitress brings over a bowl of pho to me. Hot liquid with slices of meat layered over soup noodles lifts steam into my face. It is hard enough being nearly 6 feet tall, lacking coordination and hunched over a small plastic table, carefully squatting on a stool that could break any moment.

“I have a question for you,” Thu, the waitress, asks me while watching me wage a battle with the soup noodles with my chopsticks and spoon.  “How much is a house in your country?”

I grab a pen from my pocket and write down the figure $600,000 on a napkin. Thu’s eyes bulge with shock. To calm her down, I explain that “beautiful houses in nice places cost a lot more money.” But the reasoning seems lost on her. She excused herself and returned with a calculator, pointing to the number 12,000,000,000 on the small screen.

“One house cost this much Vietnamese Dong,” Thu says. She earns 10,000 Dong (50 cents) an hour. “Every day, I study marketing at university every so I can graduate and get a good job. And I work here 6 days a week for some money.”  She punches in some numbers, shook her head and stated, “I will need more than 500 years to get money for a house in your country. Maybe it is cheaper to buy Reunification Palace. You go there today and check for me.”

With a nod and one last mouthful of pho for courage, I thanked Thu and promised her that I would buy Reunification Palace, and so onto my house hunting mission – securing a piece of Vietnam’s history.  I then handed over 50,000 Dong for the meal. ‘Failing to buy the palace could lead to a 12 billion Dong bill next time’, I thought.

In Saigon, the competition amongst motorcycle riders and cyclo riders is fierce. Plenty offer me access to sexy women and drugs, but nobody stands. Then one man, with several stained teeth and a cigarette hanging from his lips, pulled up beside me, and bragged, “I know every street in Saigon. Come for the ride of your life.”

I had found the man.

“I am going to buy Reunification Palace,” I said.

The driver looked at me. “You are on drugs, yes?”

Van is 60 years, a proud Saigonese native. He did not seem phased when my body frame caused the rear end of his sear to lower. If anything, his iron calves shifted into overdrive, weaving through alleys and streets. With cigarette smoke rising every time he pedaled harder, it reminded me of a steam train. I nicknamed him Puffing Billy, a reference to a popular tourist attraction in Melbourne.

We weaved between tight spaces, watching motorcyclists inched forward at every opportunity. “Every day, I wash my cyclo. She is everything to me. We have been through many things together,” Puffing Billy said to me.

I asked if he had a name for his cyclo.

“Cindy,” he said. “Sexy Cindy. For 31 years I ride her. Nobody does it better. I am encyclopedia of the streets.” He put a specific emphasis on the pronunciation of cyclo, proud of the fact that it linked his profession with a reference book containing knowledge on nearly every subject. But his sentence was cut short. Puffing Billy slammed on the brakes to avoid an errant motorcyclist who cut in front of him and wobbled his machine. In a show of bravado, he let loose a barrage of words towards the other driver. Judging from the tone, none of them were complementary. Puffing Billy signed off by giving the motorcyclist the finger.

“Next time I show him who is boss,” he said, his voice raised in an aggressive, heart pumping with adrenalin. His wiry body frame hid a ferocious temperament which would have propelled him to fight if necessary. This, Puffing Billy explained, was due to his family’s military background. His grandfather had fought in the army, his father had served in both the army and navy and Puffing Billy had fought in armed combat too during the Vietnam War.

“I finished high school and got an electronics degree at Hong Bang University. I was lucky; smart people became officers, like I did. High school dropouts were soldiers. That is what happened to some of my friends. They had to fight against the Viet Cong (VC), and I never heard from them again.”

Puffing Billy said that he did not know anyone who sympathized with the Viet Cong. When I asked him where he was on the day Saigon fell on 30 April 1975, my ride came to an unexpected halt. Puffing Billy swerved his bike and braked hard enough for me to sway in my seat. It felt uncomfortable.

“No more questions, I do not want to talk,” he said abruptly. Neither of us said a word for what seemed like ages, but in real time was approximately 5 minutes. The journey to Reunification Palace felt more of a burden, or that is the effect it seemed to have on Billy. It must have triggered an unnerving sense. To fill in the time, I got my camera out and played the good tourist, filming street side life. Then Puffing Billy started talking to me.

“After the war was over, I was branded an enemy because I supported America. I had to do ‘re-education’, working in the rice fields many hours a day for little food.” He paused. “Officers kept interrogating me: ‘Americans killed Vietnamese, why do you like the USA?’” In that time, he says he lost both his dignity and pride. “For many years I could not get a job. They may as well have beaten me up in the streets or set me on fire. Nobody wanted to know me.”

When we arrived near the Reunification Palace, I felt guilty about pushing for an answer and tried to say sorry before handing over some money, but Puffing Billy brushed off the incident. “If I see you here, I will not stop,” he said. Before riding off into the distance, he stuck his middle finger up at the entry gates to the Reunification Palace. Or maybe it was meant for me.A security guard noticed the gesture, and was unimpressed that I had been associating with a man who had just given him a rude gesture.

“I am sorry, sir, come back in two hours, please. Now lunchtime,” the guard said abruptly. It left me with two hours to entertain myself, not a hard task when a group of university students persuaded me to come and talk to them. They had me at hello. My chance meeting with a dozen female students turned into an impromptu vox populi session. After hearing that I was from Australia, this group of young women told me that they were all classmates at a nearby university, studying to become Early Childhood Workers.

“How often do you speak English to foreigners?” I asked.

“Not much,” one girl answered. “We are embarrassed to approach English speakers in case of making a mistake.”

I asked how they learned English.

“Facebook and Taylor Swift music. If you sing for us, we teach you Vietnamese. Free lesson, buy us all one coffee in Starbucks,” leading to lots of giggling.

It took me several minutes to get basic phrases right, such as Hello (xin chao) and ‘My name is’ (Toi ten la). Learning a new language does not come natural to me. Vietnamese is a language where intonation means everything; an incorrect tone can get weird looks. I forced myself to undertake a memory, which involved reciting all the girls’ names. This quickly turned into a form of ‘Truth or Dare’. The moment I forgot a name, the punishment was unanimous. “Dare – Kiss that police woman”, everybody shouted.

Raising the stakes, I said, “OK, but only if you can sing ‘Gangnam Style’ for me.”

If I thought that would catch anybody out, I was wrong.

“Heyyyyyyyyyyyyy, sexy lady” led to a raucous line of “Whoah, Vietnam Style.”  This outburst broke every social convention in the rule book.

I tried to get out of the situation by stating that we would all get into trouble.

“That is ok, David, our secret,” one girl explained. That angle had been thwarted.

Our last act together was to take photos. With the park providing a tranquil backdrop, university friends posed together like pop stars, and we all had one last group shot as a reminder of our “Vietnam Style” street class.

“David, we want to show you the Reunification Palace, but our professor is waiting. Maybe next time.” Then everybody left.

Having been thrown into the new Vietnam, it was now time for me to absorb an integral piece of Vietnam’s history. An impeccable piece of architecture with a sea of lush grass, the Reunification Palace (also known as Independence Palace) is where the Vietnam War ended, following a North Vietnamese tank crashing through the front gates, marking the Fall of Saigon.I wondered how the students who I had befriended earlier would explain this to me, if they had been able to act as tour guides.  Instead, I found myself being rounded up and ordered to stand in a single file by an employee of the building, whose job it was to motivate the group. She acted as if she were on active military duty. I dubbed her Sniper, because she possessed an intense glare similar to the thousand yard stare.  “Keep quiet on entering,” she barked. “Other people are inside.” There were only four people, and one of them was a carved statue of Ho Chi Minh’s head.

Sniper relished any opportunity to make me sweat profusely when put on the spot. I was pointed out to answer a question when Ho Chi Minh died, and it must have disappointed her that I got it right. “Very good, your brain is on today,” she reacted, teeth snarling like razor blades. The next person, however, was not so lucky when he stumbled upon answering a question how old Ho Chi Minh was.  “If I tell you his date of birth, do you need a calculator? I have not got all day,” Sniper said. We laughed politely in fear of being denounced as traitors for not obeying orders.It detracted me from inspecting and appreciating the premises, but also reporting my findings to the potential buyer, Thu the pho lady.

In the end, the numerous stories associated with each room and the importance of fixtures such as light fittings, color coordination and special rugs made me realize that a national treasure is simply out of my league. But there were some highlights. The ballroom, decked out with a grand piano and fully stocked bar, threw back moments of a colonial era. I was also impressed with the gambling room, home to numerous mah jong tables and rocking chairs for unlucky punters to drown their sorrows in alcohol after losing substantial amounts of money. Most impressive, however, was the war room, decorated with strategic maps of the Vietnamese provinces, marked with forests, cities and villages. The greatest attraction, were lots of machines; the one with a red button, which I wondered was the nuclear trigger, took my attention. It could have been a fantasy from the film Dr. Strangelove.

Of course, I did not have the spending or social power to seriously bid for this piece of history, and I could not return to the woman that served me pho, and inform her that my attempt to purchase the Reunification Palace was unsuccessful. But in true Vietnam style, there is always plenty of change available, and it possible to be both wealthy and enriched.