Neighborly Crimes of Complicity in the Gaza Massacre

Of all the complexities surrounding the reaction of the world to the horrifying spectacle of Israel’s severe criminality in Gaza none is more perplexing than the complicity of most governments throughout the Arab world. 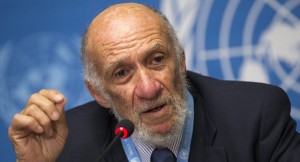 What makes their political posture particularly bewildering is the degree of ethnic, religious, cultural, and historical commonality that creates such close ties of identity among the peoples of the region. And no single issue has been as unifying over the decades for these people than has their long intensely felt opposition to the injustice, suffering, and exploitation that the Palestinian people have endured for the past century as a result of the encroachments of the Zionist movement on their lands.

It should be recalled that at earlier stages of the Palestinian ordeal, the governments of the neighboring Arab countries did exhibit strong, if ineffectual, solidarity with the Palestinian struggle. Several Arab states jointly attacked Israel, initially in 1948 to prevent the establishment of Israel, and later in the failed wars of 1967 and 1973 that challenged Israel’s existence. These defeats together with Egypt’s accommodation via the peace treaty of 1979 was a defining moment at which the Arab neighbors of Israel abandoned the Palestinians politically, but not yet diplomatically or economically.

At this time any tangible form solidarity at the level of Arab governments is now a distant and ironic memory, and has been supplanted in the main by active hostility to Palestinian aspirations and implicit sympathy with, or at least acquiescence in Israel’s regional ambitions in conjunction with U.S. grand strategy in the region.

Some official formal hostility to Israel and sympathy for the Palestinian struggle persists at rhetorical levels, but rings hollow. It is true that many Arab countries to this day refuse entry to anyone with an Israeli entry or exit stamp in their passport. Anwar Sadat’s assassination in 1981 was widely interpreted at the time as a populist response in Egypt to his willingness to sign a peace treaty with Israel without simultaneously securing justice for the Palestinians, thereby crossing what was then a red line of betrayal. It was observed by the Western media that few Egyptians bothered to leave their apartments as a show of respect as Sadat’s funeral procession as it passed through the streets of Cairo because the slain leader was so reviled for shamelessly appeasing the enemy of the Palestinian people.

Above all, the ongoing struggle for Palestinian self-determination is understood by the peoples of the Middle East, and indeed the world over, as a struggle for the empowerment and liberation of the Palestinian people in the face of severe injustices done unto them over a long period of time, and involving such crimes against humanity as apartheid and massacre, verging on genocide.

Increasingly, and never more than in reaction to this recent Gaza horror show, the Palestinian struggle will have to be waged not only against Israel, and its American and European allies, but also against the Arab collaborationist governments in the region that have betrayed their own larger religious and cultural identities, and more revealingly, the most fundamental ideas of justice and compassion associated with ideals of humanity and the ethical underpinnings of Islamic unity.

It is notable that only non-Arab Turkey and Qatar have acted responsibly in response to the Israeli attacks that commenced on July under the IDF code name of Protective Edge. The Turkish Prime Minister, Recep Tayyip Erdoğan, has spoken movingly, without hiding his condemnation of Israeli behavior behind the euphemisms of diplomacy, in characterizing Israel’s behavior in Gaza as criminal.

Even a group of distant Latin American countries, including Brazil and Chile, have at least shown the depth of their disapproval of Israel’s conduct by withdrawing their ambassadors from Israel. This symbolic expression of disapproval is something that not one government in Europe or North America, the self-proclaimed centers of world civilization, has yet done. The countries of the South have by and large also turned their backs to the Palestinians and the confrontation in Gaza, with the exception of South Africa.

Taken together these considerations make it morally distressing and politically mystifying to observe that almost every Arab governments has seemed either to be flashing a green light in Israel’s direction or pointedly looking away.

Given the criminality of the Israeli attack and the tragic suffering inflicted on the Palestinian people, complicity by way of such diplomatic endorsements, or even stony silent acquiescence, is at the very least a breach in Arab and Islamic identity, and worse, seems to be an unimaginable case of aiding and abetting genocidal political violence directed at the Palestinian people.

Such a diplomacy of indifference is especially notable as expressed toward Gaza, which is governed by a Moslem-oriented leadership. Israel’s persistence in a massacre mode despite the near universal calls for a responsibly negotiated ceasefire was widely attributed to the fact that the Netanyahu government was being encouraged behind the scenes by Egypt and Saudi Arabia ‘to finish the job,’ not of the tunnels and rockets that served as the security pretext, but of Hamas itself as ‘the head of the snake,’ the one Palestinian actor that continued to believe in a politics of resistance.

For these Arab governments to act so opportunistically, particularly given the frequency and magnitude of Israeli atrocities is shocking to all but the most numbed of political imaginations.

To be sure, the behavior of these Arab governments as mystifying, legally and morally unacceptable, and politically self-destructive warrants condemnation, but it also needs to be understood and explained as clearly as possible. What quirks of political realism led these Arab regimes to so calculate their future?

The Enemy of my Enemy

The core explanation of Arab complicity (excepting Qatar) has to do with the Arab governments hating and fearing the Muslim Brotherhood (MB) far more than they resent Israel. This logic is then extended to Hamas, which is misleadingly treated as nothing other than a branch of this supposedly poisonous tree.

This hostility to an Islamic movement authenticated from below overshadows Israel’s encroachment on their region, and even its appropriation and control of Muslim sacred places in Jerusalem. In effect what is going on in these top heavy monarchies is a passionate search for protection from possible uprisings by their own populations, which are feared as potential adversaries. Such an initial assessment pushes the question one step further but it does not give us any insight into why this should be so.

What are the sources of this hatred of the MB? The MB is perceived as the essential expression in the Arab world of bottom up political Islam that is viewed as toxic by the established order because of its grassroots legitimacy. This reality has induced panic among these Arab regimes that goes back at least as far as the explosive regional reverberations unleashed by the revolution that overthrew the Shah’s supposedly secure imperial rule in Iran (1979).

This revolutionary process caused high intensity tremors, especially throughout the Arab world, and especially among the monarchies nurturing privileged and unscrupulous elites that have long kept their populations cruelly repressed and in backward conditions of mass misery.

These regimes, generally aligned with the United States, remain obsessed with the maintaining stability of their own rule, and seem to feel that stifling all voices calling for change is a vital ingredient of their own survival.

Hamas as an active resistance movement is in this sense perceived as an acute threat to the kind of future that these Arab governments are intent of achieving no matter what the costs in lives and societal wellbeing.

First of all, Hamas has historical ties to the Egyptian MB, the older organization of Muslim activists that has kept the flame of political Islam burning despite enduring harsh suppression dating back to decades before Israel came into existence.

Secondly, Hamas demonstrated its legitimacy, and credibility as a voice of the Palestinians living in Gaza by its electoral victory in 2006, and more recently by its resilience (sumud) and resistance to Israeli tactics of aggression and massacre.

Thirdly, Sunni Hamas crossed sectarian boundaries by having its closest political ties with Shiite Iran and Hezbollah, and the Alawite regime in Syria, and although these relationships have grown weaker as a result of recent regional developments, their very existence further alarms the Sunni supremacists in Riyadh whose second source of anxiety is associated with a sectarian/nationalist struggle that pits Saudi Arabia and its allies against Iran and its allies.

The terrible carnage in Syria is one expression of this sectarian dimension of the regional struggle that complements efforts to crush any expression of political Islam with a strong societal base of support.

Of course, in the foreground is the experience of the Arab anti-authoritarian upheavals in 2011, especially the dislodging of Hosni Mubarak in Egypt, followed by expressions of far greater popular electoral support for the Muslim Brotherhood and Salafi candidates throughout Egypt than had been expected by the anti-Mubarak liberals and progressive youth who had earlier dominated the crowds in Tahrir Square.

The Gulf countries made no secret of their disappointment with Washington’s refusal to do more to beat back this populist tide that swept over the Mubarak regime, who like the Shah in Iran 30 years earlier, had seemed to offer leaders of these Arab monarchies a model of invulnerability in relation to popular upheavals.