Professor Francis Boyle on Impeachment of Bush and Obama 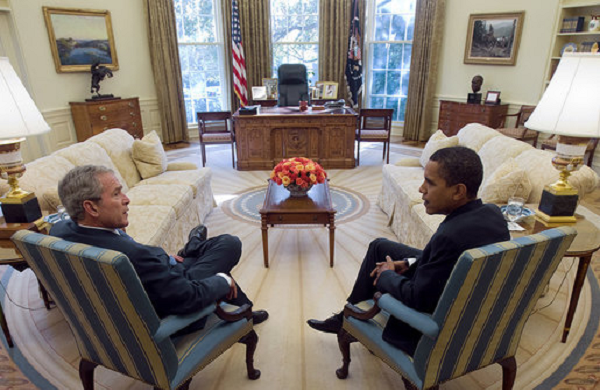 As Democratic Representative Nancy Pelosi, the Richest Representative of the One Percent in the House of Representatives, said: “Impeachment is off the table.” Nevertheless, Insouciant Californians still send the bought-and paid-for hireling to Washington.

In my day, if an experienced professor of international and constitutional law, such as University of Illinois Professor Francis A. Boyle, called for impeachment of a president, it was a serious situation for the president. But no more. Today an American president can ride roughshod over constitutional lawyers, the US Constitution, and US statutory law without any danger of impeachment. To avoid impeachment today, all a president has to do is to avoid having a sexual affair with a White House intern in the Oval Office, or is that the Oral Orifice.

America’s last two presidents, Obama and George W. Bush, have established the precedent that impeachment is a “dead letter law.” Impeachment is unlikely ever again to be a threat to a tyrannical president. Congress and the Federal Judiciary have accepted their impotence. Both “coequal” branches of government are happy in their subservience to the Executive Power. Members of Congress and the Judiciary are still permitted to pretend that they are important, like Roman Senators under the Caesars, but both are incapable of challenging the Executive Branch where a Caesar now rules independently of law and the Constitution.

I have received a communication from University of Illinois Law School Professor Francis A. Boyle, an internationally famous representative of human rights, with J.D. and Ph.D. degrees from Harvard University, a man revered in many countries of the world, although not in Washington:

“On Tuesday 11 March 2003, with the Bush Jr. administration’s war of aggression against Iraq staring the American People, Congress and Republic in their face, Congressman John Conyers of Michigan, the Ranking Member of the House Judiciary Committee (which has jurisdiction over Bills of Impeachment), convened an emergency meeting of forty or more of his top advisors, most of whom were lawyers. The purpose of the meeting was to discuss and debate immediately putting into the U.S. House of Representatives Bills of Impeachment against President Bush Jr., Vice President Dick Cheney, Secretary of Defense Donald Rumsfeld, and then Attorney General John Ashcroft in order to head off the impending war. Congressman Conyers kindly requested that Ramsey Clark and I come to the meeting in order to argue the case for impeachment.

“This impeachment debate lasted for two hours. It was presided over by Congressman Conyers, who quite correctly did not tip his hand one way or the other on the merits of impeachment. He simply moderated the debate between Clark and I, on the one side, favoring immediately filing Bills of Impeachment against Bush Jr. et al. to stop the threatened war, and almost everyone else there who were against impeachment for partisan political reasons. Obviously no point would be served here by attempting to digest a two-hour-long vigorous debate among a group of well-trained lawyers on such a controversial matter at this critical moment in American history. But at the time I was struck by the fact that this momentous debate was conducted at a private office right down the street from the White House on the eve of war.

“Suffice it to say that most of the ‘experts’ there opposed impeachment not on the basis of enforcing the Constitution and the Rule of Law, whether international or domestic, but on the political grounds that it might hurt the Democratic Party’s effort to get their presidential candidate elected in the year 2004. As a political independent, I did not argue that point. Rather, I argued the merits of impeaching Bush Jr., Cheney, Rumsfeld, and Ashcroft under the United States Constitution, U.S. federal laws, U.S. treaties and other international agreements to which the United States is a party, etc. Article VI of the U.S. Constitution provides that treaties ‘shall be the supreme Law of the Land.’ This so-called Supremacy Clause of the U.S. Constitution also applies to international executive agreements concluded under the auspices of the U.S. President such as the 1945 Nuremberg Charter.

“Congressman Conyers was so kind as to allow me the closing argument in the debate. Briefly put, the concluding point I chose to make was historical: The Athenians lost their democracy. The Romans lost their Republic. And if we Americans did not act now we could lose our Republic! The United States of America is not immune to the laws of history!

“After two hours of most vigorous debate among those in attendance, the meeting adjourned with second revised draft Bills of Impeachment sitting on the table.”

Professor Boyle said to former Attorney General Ramsey Clark on the way out of the building after the two hour debate:

“Ramsey, I don’t understand it. Why didn’t those people take me up on my offer to stick around, polish up my draft bills of impeachment, and put them in there right away in order to head off this war?

“And Ramsey replied: ‘I think most of the people there want a war.’”

You can listen to Professor Boyle tell the story here:

If you are impatient, listen from the 7 minute marker to the 9:35 marker.

Once upon a time Democrats were less vicious than Republicans, but no more. I can remember when Democrats were the Humane Party. This was before the corporations and their “free market” shills sent the industrial and manufacturing jobs to Asia, destroying the industrial and manufacturing basis of the Democratic Party in the working people. Today the Democrats have to appeal to Wall Street, to the Military/Security Complex, and to the Environmental Despoilers in the Agribusiness, Timber, Mining, and Energy industries.

Obama completed George W. Bush’s destruction of the US Constitution. Neither party represents you or America, unless you are the one percent. If you vote for a Republican or a Democrat you are voting for your dispossession and for war. You are voting in favor of a DHS sponsored SWAT team breaking into your home at night and murdering you or your wife or your children and most certainly the family pet dog.

Both political parties are irredeemably evil. Neither has any redeeming virtues.

If Americans cannot find leadership that can survive assassination, either by media slander or by SWAT Team bullet, America is lost.

How would you place your bet? Is America lost or is America the salt of the earth, the exceptional, indispensable people chosen by History to enjoy hegemony over Earth?