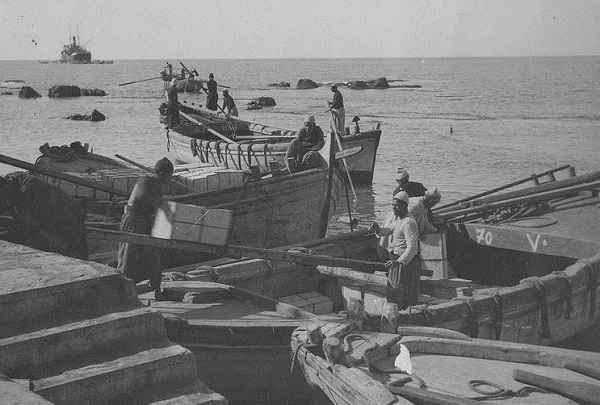 Boats ferrying boxes of oranges to freighter waiting beyong the rocks at Jaffa. circa 1930. (Wikimedia Commons)

In ‘Jaffa: Land of Oranges’, Ghassan Kanafani described his exile from the Palestinian coastal city of Yafa.

As a 12-year-old boy, he struggled to understand, but “on that night, though, certain threads of that story became clearer … a big truck was standing in front of our door. Light things, mainly sleeping items, were being chucked into the truck swiftly and hysterically.”

A few decades after Kanafai wrote about his exile, I, an 8-year-old boy from a Gaza refugee camp, pondered on my own. When I stood at the borders of Yafa, the line of what was real and imagined suddenly became blurred. Once Palestine’s largest city, Yafa turned out not to be a figment of my grandfather’s imagination, or Kanafani’s, but a tangible space of sand, air and sea. The Palestinian-Arab identity of Yafa was evident everywhere.

I was a third grader on my first school trip. Gazans were still allowed to cross into Israel in those days, mostly as exploited cheap labor. My family was driven out of Palestine during the Nakba, the “Great Catastrophe” that saw the expulsion of hundreds of thousands of Palestinians from their homes. My family was comprised of simple peasants from the village of Beit Daras. The residents of my village were known for their love of couscous, and for their legendary stubbornness, courage and pride. Beit Daras residents saw in Yafa a center of many aspects of their lives. A commercially vibrant port city, known around the world for its oranges, Yafa was home to some of the largest markets in southern Palestine.

Yafa was a center for Arab culture, and a model of co-existence between religions. But British colonization of Palestine starting in 1917 then morphed into a mandate government in 1922, interrupting the natural historic flow that positioned Yafa as the beating heart of Palestine.

Strata of educated elites in Yafa had raised the level of political consciousness of the city to standards that would still be considered high by Middle Eastern criteria today. Politicians, artists, bankers, craftsmen and young and vibrant student communities gave Yafa a middle class that served an essential role in the fight against British colonialism and its Zionist allies many years before the Nakba and the creation of Israel.

Yafawi union members organized around labor rights with steadfast commitment. Arab laborers were being laid off and Jewish laborers coming from Europe were taking their place. That mobilization become part of the 1936 strike and revolution, Palestine’s first collective uprising that inspired generations of Palestinians, and still does today.

Numerous villages and small towns looked to Yafa for guidance, and sometimes survival. My grandfather, who owned a small piece of land in Beit Daras, was a craftsman who weaved baskets. Every few days, he hauled the best of what he made into the Isdud and sometimes al-Majdal markets hoping for a few extra Palestinian dinars to supplement his meagre income. But the best was saved for Yafa because the Yafawis had the best taste. He would put on his poshest outfit for this trip. After feeding his trusty donkey he would pile his baskets on the cart and embark on the long journey.

“’Sido (grandpa) please tell us stories about your adventures in Yafa,”’ we would plead him, as he sat atop an old mattress in his special corner of a small, decaying house in a refugee camp in Gaza. His stories, which he conveyed with much suspense, trod a fine line between truth and fantasy. When I grew up, I realized that the fantasy was not simply his way to amuse us children, but also a way to express how Yafa represented my grandfather’s greatest triumphs and most humiliating defeats.

Fantasy helped him make sense of the world he had left behind. When the Arabs revolted in 1936, Britain hit back pitilessly. Not only did they kill, imprison and exile many Yafawis, they also defaced the city. Large parts of the Old City were erased never to be seen again. History was violently undone.

Grandpa was one of the thousands who defended Palestine to the bitter end. Although he was a peasant, who had taught himself how to weave baskets to survive, later he exchanged everything for an old Turkish rifle to defend Beit Daras, as nearby villages were falling in the hands of Zionist militias, one after the other.

Grandpa said much about how beautiful Yafa was. He would describe the gentle breeze of the sea as it greeted you upon your entrance to the city, and how it would make you feel as if your soul returned to you.

When Beit Daras fell after successive battles between Zionist militias and villagers armed with only a few rifles, grandpa’s soul was trapped forever.

When Plan Dalet, the master plan through which most of Palestine was violently conquered, was implemented following the calculated departure of the British forces, the capture of Yafa became the culmination of a violent campaign.

The highway between Yafa and Jerusalem was a theatre for heroic battles, culminating in the battle of Castal, a few miles away from Jerusalem.

Yafa, known as the “Bride of Sea” was conquered between April and May, 1948. A major exodus was already underway into Transjordan and Syria. Zionist forces belonging to the Haganah and Irgun set aside their supposed differences as they moved in against Yafa.

Three different military campaigns were launched simultaneously—Chametz, Jevussi and Yiftach—through which Yafa, areas around Jerusalem and the whole of eastern Galilee were seized. But when Yafa fell, the pride of Palestine was crushed.

The city was encircled, forcing thousands of people to flee by sea to Gaza or Egypt. Many drowned as small, overcrowded fishing boats gave in and sank. The Arab leadership had hoped the British would not allow the Zionists to conquer Yafa. They were ill-prepared. Civil defenses arrangements were almost non-existent.

The military disparity between Zionist militias (numbering at about 5,000 well trained fighters) and Arab volunteers (numbering around 1,500) was impossible to overcome without backing from the outside. None came. Men and women died in droves. Tens of thousands were on trek over land, but mostly by sea.

While the term Nakba might be a fitting depiction of what befell the Palestinian nation in 1947-48, it is somud—steadfastness—that keeps the millions of refugees holding on tight to their right of return 66 years after the land of orange trees was conquered, and its somud that will keep Yafa alive, forever.