Misdaventures in ESL: Married to a Dictionary

Language learners can be intelligent and even have a fairly large vocabulary, but cultural barriers may still prevent them from learning. In Asia, for example, because students have been forced since childhood to memorize long lists of vocabulary, it is very common for them to be married to the concept that each English word has exactly one meaning, regardless of context, and exactly one translation into their mother tongue. And this belief is often so ingrained, trained over a period of decades, that in spite of my education and being a native speaker I cannot dissuade them of it. 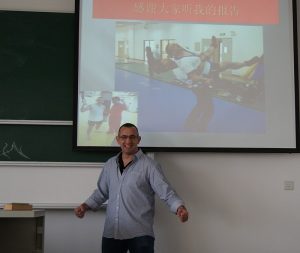 Here is an example from a high level group of adult students in China. We read a text about the threat of a pandemic wiping out most of Europe. They knew the word “epidemic”. So, I explained that the “demic” in “pandemic” was similarly related to a disease. And they were fine with that. Next, I asked if they knew the word “pan.” Instantly, they all said “frying pan.” I commended them on knowing ‘frying pan,’ but pointed out that in this context, pan had a different meaning. To which, they responded, “frying pan.” So, I told them that ‘pan’ meant ‘across.’ And that a ‘pandemic’ was an epidemic that went across national borders.

“Yes, because the frying pans are dirty.” explained one of the more intelligent students. In fact, he even rethought “dirty” and said “un-san-i-tary.” Once again, I was very supportive. “Nice word.” But I went on to explain that ‘pandemic’ had nothing to do with a frying pan. In the end, I had to simply move on. Not only did they not learn the meaning of “pan”, but they think I was lying to them, and they will never trust me again.

In another class, with an intermediate level, private Japanese student in her fifties, the article said “After seeing the film in the cinema, the star felt it was a real work of art.” So, I asked my student, “What does it mean when they say “a real work of art?” The student didn’t know. So, I explained, “It means the actress didn’t think this was just a movie for entertainment. It was something special.” So, the student asked “Art mean special?” I tried several more times to explain, in vain. “She meant the movie was beautiful.”

An interesting point about older Japanese students is that they often speak in very broken English, well below their level. But their reading comprehension is exactly on level. Apart from this one hang up, the student understood the complex text about the making of a short film which won awards.

“The movie was meaningful.” I tried again.

It was one more example of students looking for, even needing, each English word to have exactly one meaning and one translation. “Yes, it means special, beautiful, and meaningful all at once.” I conceded. And we moved on.

Another example was a text that said someone had accused someone else of murder. The student didn’t know “accuse.” So, I simplified by saying, “It means you say someone did something wrong.” She responded “accuse mean say?”

“Not exactly, it means to say someone did something wrong.”

I went through several examples of accusing someone of murder or bank robbery or rigging the votes in Florida. After going through a number of examples, the student said “Understand now. Accuse mean tell.”

The absolute worst example of this phenomenon I have ever encountered was in Cambodia. In an intermediate class, mostly full of college students and young professionals, we read an article which began something like this “If you think baseball is boring, you should try cricket. A cricket match can last three days and end in a tie score of zero-zero.” I confirmed whether the students knew what baseball was. And they did. Next, I asked if they knew what cricket was. One girl quickly said, “A small animal that makes music.”

“Yes,” I agreed. “That is the common use of the word cricket. But here, it has a different meaning.” We reread the opening sentence. Then I asked “Can anyone guess what cricket refers to here?” I wasn’t expecting them to know it was a British game, or have a picture of the game in their heads. They had obviously never heard of it. But since cricket involved a match and could end in a tie score, and it was being compared to baseball, I just wanted to see if they would guess that it was some kind of a game or sport.

I went around the room, asking, “In this text, in this text, specifically in this text, can anyone guess what cricket means?” The first three students all said, “A small animal…”

After I finished reading, I asked “Does that make sense?” To which, the whole class dutifully replied, “Yes, teacher.” I just decided to scrap the text and move on. This wasn’t a class on insectology. Entomology maybe, but insectology, never!