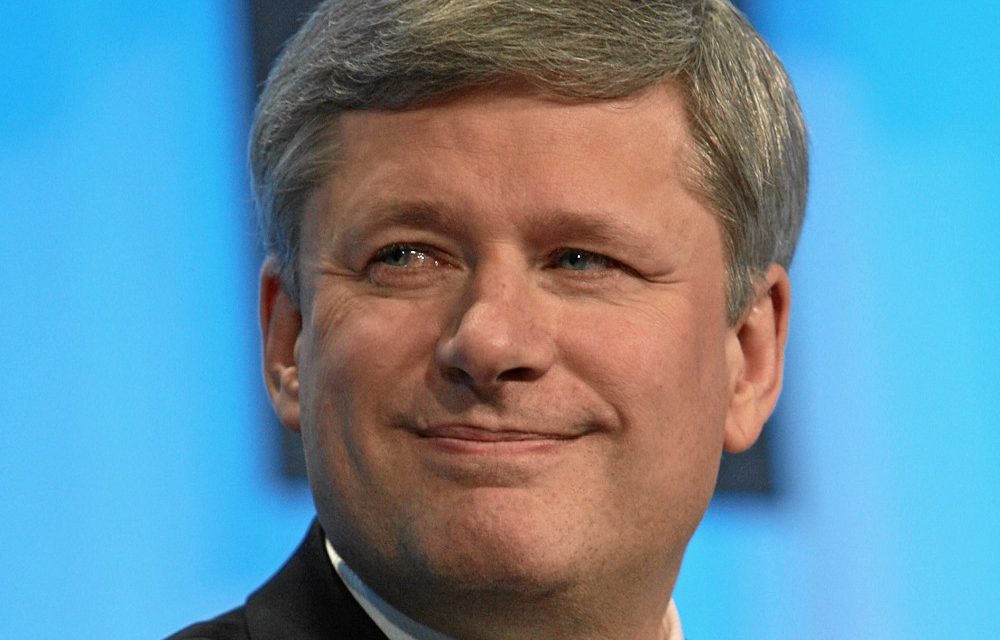 It is aggravating to see our little banty Rooster chicken-hawk Harper strut his stuff while he spouts the false corporatist philosophy about freedom and democracy in the Ukraine.

What it is really about—as I have already mentioned several times—is US hegemonic control of global finances and corporate control of a country’s resources in order to harvest the wealth for the empire’s center.

Cargill has a deal already signed that would position them to control large tracts of land for agricultural purposes—but you can be assured it is not for the benefit of the Ukrainian people.

Chevron has been awarded a large fracking contract, another step in corporate control of global energy resources and a partial means to counteract Russia’s large share of gas and oil wealth vis a vis Europe.  Behind Victoria “F**ck the EU” Nuland as she spoke at the National Press Club in Washington about the Ukraine was a large Chevron logo.

Another aspect is the rejected EU trade deal, that would have placed the Ukraine under the same ‘austerity’ crap that the IMF/EU have demanded of other EU countries, once again extracting wealth, in this case primarily financial.  Russia offered a trade deal that did not demand the austerity measures considered normal by the IMF and its coterie of financial predators and, immediately after that was accepted by the Ukrainian government, the US supported neo-nazi skinheads in Kiev made their coup against a democratically elected government.

Yeah, yeah, sure, it would be nice to have a referendum concerning a federated constitutional setup for the Ukraine, but that is not what the corporate west really wants.  What is desired is full financial-political control of the Ukraine in order to advance the US/NATO military right up to Russia’s borders and then to start agitating inside Russia in order to tear apart that country.

As for Banty Rooster’s language about “provocateurs sent by the Putin regime”, it is essentially propagandistic bullshit. To quote our little Banty strutter even further, “When a major power acts in a way that is so clearly aggressive, militaristic, and imperialistic, this represents a significant threat to the peace and stability of the world, and it’s time we all recognized the depth and the seriousness of that threat.” (CBC News, April 14, 2014)

It’s about time is all I can say.  Now perhaps we can look at the illegal preemptive US invasion of Iraq; its end-run support of the supposed ‘no fly zone’ in Libya that turned into a bombing campaign; similar to the illegal bombing of Yugoslavia/Serbia on the pretext of ethnic cleansing from which the US declared Kosovo’s independence without a referendum in spite of Obama’s lies to the contrary.

Of course, the US has acted as much through the CIA as through direct military force, and with control of the world reserve currency has been able to bribe hundreds of politicians around the world.  Most of Central and South America has suffered under brutal regimes established by US overt and covert operations over the decades from the era of Nicaragua and US support for United Fruit against the indigenous population, through the era of Pinochet in Chile, the more recent overthrow of the duly elected Aristide government in Haiti (with Canada’s assistance in his kidnapping and subsequent removal from power), and up to the ongoing interference in Venezuelan democracy.

Much of Asia has suffered similarly.  Vietnam is an obvious item, again aided by Canadian complicity as we were one of three countries designated by the UN to hold a vote there on unification, which of course was conveniently delayed so the US could establish their own puppet government in the south and pre-empt a vote. Falling dominos? Communist threat? All propaganda hogwash that resulted in millions of South Asian deaths, and tens of thousands of wasted US/allies deaths.

Iran is another best example, although few are well read enough historically to know that the democratically elected Mossadegh government of Iran was overthrown by a CIA-MI6 coup that installed another US puppet, the Shah of Iran (1953).  That led eventually to the Iranian revolution of 1979 because of the Shah’s elitist policies and his use of the brutal SAVAK secret police.  Talk about blowback.  This continues today with the sanctions illegally imposed on Iran (sanctions are an act of war) which, fortunately and ironically, have forced Iran to trade—successfully—in other currencies (the rupee for India, the yuan for China, barter with the Russians, and gold for any and all comers).

Afghanistan may have been legitimated after the fact by the UN, but its initial inception came from US desires for control of territory (guess what, gas and Russia/China containment again)  rather than a police action to capture bin Laden.  The Taliban fight was an after the fact issue that allowed the US to try and gain control of the country.  The Pashtun had nowhere to run to and stayed to fight and defeat the US and its allies, leaving Afghanistan essentially in ruins after three decades of fighting, with more warlordism to come yet.

Enough said, as there is plenty of material available for the intelligent inquirer to learn more about the above and many other US “aggressive, militaristic, and imperialistic” actions around the world over the past century or so.

And while it is aggravating to see Harper strut his stuff, it is equally aggravating to see that apparently everyone else is swallowing the wests corporate-militaristic line as well, both Liberals and New Democrats.  I wonder whether it has to do with posturing for the Ukrainian vote, or whether it has to do with ignorance of the realities of the situation (seen by most outside of the increasingly smaller sphere of US political-financial influence), or whether some are simply afraid to speak up against the status quo that keeps them in comfort at the expense of most of the rest of the world.

Truly Naomi Klein’s Shock Doctrine is being applied in full force in the Ukraine, as the corporate state is lined up ready to take its treasure from yet another country devastated by the caprices of the Washington consensus (WTO/World Bank/IMF/NATO et al).

Your wimpy little sanctions will only speed up the demise of the current financial house of cards built on hugely over leveraged debt, backed by the US military and its revolving door of corporate interests.  Quit clucking and let’s see some real action, some real leadership—enough false bravado.  Then you can stand on your pedestal, hand in lapel, laurel wreath upon your head, and be proud to be a part of the corporate-military elite that rule the world.