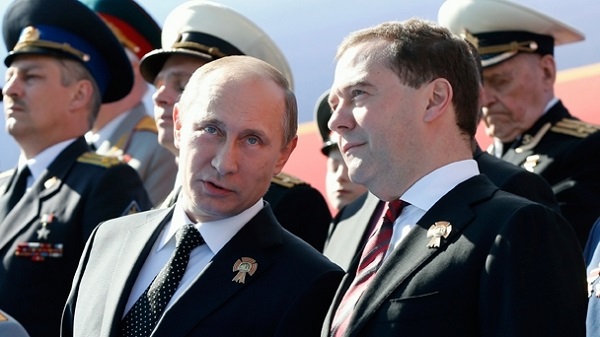 The recent developments in Ukraine came about in the midst of the ongoing Winter Olympics in the Russian Black Sea resort city of Sochi. As a result of those developments, the Ukrainian President Viktor Yanukovych, who is a Russophile politician, disgracefully fled from the presidential palace in the capital Kiev and has sought refuge in a yet unknown location. The only thing that he did was to post a short video footage in which Yanukovych claimed that he is still the legitimate president of Ukraine.

On the other hand, the Russian President Vladimir Putin was busy watching the games in Sochi and had less time to totally focus on Ukraine’s developments. He even left the duty of announcing Russia’s overall views on these developments to his prime minister, Dmitry Medvedev, who in turn, took part in a press conference and described political developments in Ukraine as an ‘armed insurgency’ and ‘illegitimate’.

Regardless of the description used to explain the country’s developments, there is no doubt that Russia considers them as extremely detrimental to its interests as they will potentially pave the way for the West to increase its influence in a geopolitically sensitive part of Moscow’s sphere of influence.

A strong presumption about Russia’s stance on Ukraine’s developments is that the Russians have not remained idle in the meantime and have been working out an effective strategy in order to reduce the geopolitical costs of what is going on in this East European country for Moscow. The past experiences in Chechnya and Georgia, and the current experience in Syria has shown that when they find themselves faced with a major geopolitical threat, Russians are not manipulated by the Western countries’ political frown or smile.

On the other hand, Russia’s passivity in Ukraine and its indifference toward the fate of Russian people living in that country will deal a drastic blow to the legitimacy of Putin inside Russia. It should not be forgotten that the main reason which prompted the Russian people to vote for Putin in three presidential elections was his success in the revival of the past grandeur of Slavic people. Therefore, Putin is very sensitive about this issue.

The question that has occupied observers of Ukraine’s developments is what cards are available to Moscow to play vis-à-vis the ongoing developments in Ukraine?

A review of the available evidence and also analysis of remarks made by Russian prime minister and its foreign minister, Sergey Lavrov, about the interim government in Ukraine, shows that Moscow has no plan to get along with the new Ukrainian government. Therefore, other alternatives should be taken into consideration. It seems that in view of Putin’s character and the overall direction in which the Russian foreign policy moves in the “near abroad,” there are three options available to Moscow with regard to developments in Ukraine:

1. Offering military support for Yanukovych and restoring the past situation to Ukraine.

This option has been getting momentum after he apparently has been given sanctuary by the Russian authorities as well as were allowed a statement on his behalf to be read out on Russian TV and distributed by all Russia’s main news agencies in February 27, 2014, in which he officially declares himself still president of Ukraine and denounces the new government in Kiev as “extremist” and the parliament as illegitimate.

Although such a measure will relatively change the situation in Ukraine to Russia’s benefit, it will have negative consequences as well. On the one hand, due to West’s support for new Ukrainian government, the country may be pushed toward an all-out civil war. The West may even form a so-called Ukraine liberation army in order to fight the Russian forces, which will face the leaders in Kremlin with another experience like what they already witnessed in Afghanistan.

Of course, due to the possibility of Ukraine’s crisis spilling over into European countries, such a turn of events will be also costly for the West. On the other hand, this measure may interrupt cooperation between Russia and the West in various fields and also cause Putin’s main foreign policy strategy, which is rivalry combined with cooperation with the West, to grind to failure. Such an outcome would be very costly for both sides of the conflict.

Given the fact that the people living in eastern part of Ukraine and the Crimean Peninsula are mostly of Russian origin and also since the lion’s share of Ukraine’s industries and economic potentials are located in this region, Russia may be willing to see a divided Ukraine in which the less developed part will be given to the West.

We can see early sign of this issue by occupation of the governmental buildings by pro-Russian unidentified armed men in Simferopol, who hoisted a Russian flag from the roof. In that case, Russia will be able to flaunt the power of the Russian part of the country at people living in the Commonwealth of Independent States and remind them of possible costs of inattention to Russian population in those countries.

The division of Ukraine will also put Russia’s mind at ease about the strategic marine base in Crimea for a long time. Of course, the disintegration of Ukraine should take place in such a way that the eastern part of the country would have still direct access to Eastern Europe for the transfer of Russian gas to European countries. The main problem with the disintegration of Ukraine is that few countries will be possibly ready to recognize the Eastern Ukraine and, as a result, the new country would face a crisis of international legitimacy.

3. Establishment of a new interim government in Ukraine.

This third option will see an end to the interim government of Alexander Turchinov through international mediation. Subsequently, and through the agreement of Russia, a new interim government will be formed supported by all parties involved in the conflict, which would especially take into account the concerns of Russia. In view of the realities on the ground, this seems to be an unlikely option. However, the course of developments may force the conflicting parties to move in that direction because it will be also a face-saving option for all parties in Ukraine crisis.

Regardless of which one of the above options will finally take place, the reality that should be taken into consideration is that Russia will certainly not remain indifferent toward what is going on in Ukraine. Just this morning (February 27), the Russian foreign ministry issued a new warning that it would “strongly and uncompromisingly” defend the rights of its compatriots and alongside the Russian army and fighter jets now on combat alert indicates that, if diplomacy fails, Moscow will use its iron fist to respond to the country’s developments.