Impossible Dialogue: The Choice in Yemen 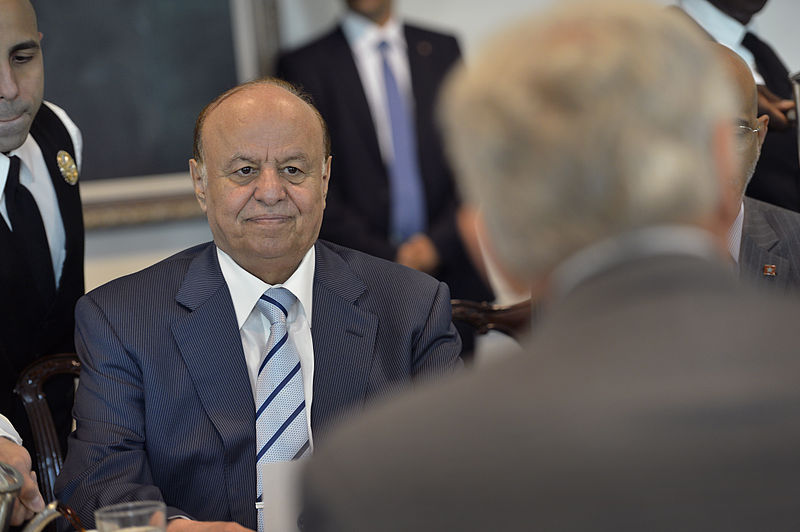 Sitting down for a meeting, Yemen President Abd Rabuh Mansur Hadi listens as Secretary of Defense Chuck Hagel welcomes him to the Pentagon July 30, 2013 (US Department of Defense)

Chances are dim that elections will be held in Yemen next February. Yet without elections, the push for reforms and change that were inspired by the Yemeni revolution would become devoid of any real value. Yemenis might find themselves back on the street, repeating the original demands that echoed in the country’s many impoverished cities, streets, and at every corner.

It is not easy to navigate the convoluted circumstances that govern Yemeni politics, which seem to be in a perpetual state of crisis. When millions of Yemenis started taking to the streets on January 27, 2011, a sense of hope prevailed that Yemen would be transferred from a country ruled by elites, and mostly beholden to outside regional and international powers, to a country of a different type: one that responds to the collective aspirations of its own people.

Instead, after a long stalemate that pinned most of the country and its political representatives against former President Ali Abdullah Saleh and his supporters, Gulf countries brokered a power transfer deal. The deal however sidelined Saleh, but not his family and their proponents.

It is of little help that interim President Abd-Rabbu Mansour Hadi, who was elected to guide the transition for a two-year period in 2012, is no revolutionary. True, he seemed sincere in his attempt to curb Saleh’s still prevailing influence over many of the country’s institutions, but that is hardly enough. Saleh’s supporters are still powerful and the former ruling class is fighting back for relevance and influence. This results from a combination of deepening poverty and a failure to translate any of the revolution’s demands into any tangible solution that could be felt by the country’s poor and marginalized classes.

The target of Saleh’s supporters is the Conference of National Reconciliation (CNR). It convened on March 18 to explore common ground between all strands of Yemeni society, draw-up a new constitution and organize national elections. The 565 members of the conference found out that their differences were too many to overcome. Exploiting Yemen’s political woes, tribal and sectarian divisions, the old regime used its own representatives at CNR, and sway over the media to derail the process.

In remarks before the Security Council, Jamal Benomar, the United Nations envoy to Yemen, sounded the alarm to the staged comeback. A statement of his remarks was made available to the media on Nov 28. It said that there was a “well-funded, relentless and malicious media campaign” to undermine Hadi, so that he either prolongs his mandate or leaves offices. “Some elements of the former regime believe they can turn back the clock,” the envoy said. These elements have become a “persistent source of instability.”

The dialogue itself has been extended, with little evidence that anything concrete is on the way. What is even worse is that 85 delegates representing south Yemen, which until 1990 was a state of its own, decided to permanently leave the conference. The separatist movement in south Yemen has grown massively in recent months. The country is more vulnerable than ever before.

If Hadi leaves, a political vacuum could spark another power struggle. If he stays by extending his term in office, the dialogue is likely to falter even more. There can be no win-win situation, at least for now.

Considering that Benomar himself played a key role in shaping the current transitional period, his gloomy reading of the situation in Yemen is hardly encouraging.

As talks are derailed and the prospects of a compromise are at an all-time low, the Southern separatist movement Al-Hirak continues to gather steam. The movement grew increasingly more relevant following the Oct 12 rallies, when tens of thousands of Yemenis took to the streets of Eden, mostly demanding secession from the north.

What is happening in Yemen these days is in complete contrast to the collective spirit that occupied the streets of the country nearly three years ago. In January 2011, a large protest took place in the Yemeni capital Sana’a demanding immediate reforms in the country’s corrupt family and clan-based politics. Within a week the rest of the country joined the initial cry for reforms. On February 3, both Sana’a and Eden stood united under one banner. It was a momentous day because both cities once served as capitals of two warring countries. The youth of Yemen were able to fleetingly bridge a gap that neither politicians nor army generals managed to close despite several agreements and years of bloody conflicts. However, that collective triumph of the Yemeni people was only felt on the streets of the country, overwhelmed by poverty and destitution, but also compelled by hope. That sentiment was never truly translated into a clear political victory, even after Saleh was deposed in Feb 2012.

The Gulf-brokered agreement under the auspices of the UN and other international players stripped the revolution of its euphoria. It merely diverted from the massive popular movement that gripped the streets for many months, allowing politicians, representatives of tribes and other powerful elites to use the NDC to simply achieve its own interests, be it to maintain a handle on power – as is the case of the ruling General People’s Congress (GPC), or to ignite old hopes of secession. The party that was closest to the collective demands of ordinary Yemenis was the Joint Meeting Parties (JMP), representing the opposition. However, conflict soon ensued between members of the JMP themselves, especially between the Islamic-leaning Yemeni Congregation for Reform (Islah) whose core supporters are based in the North, and the secularist Yemeni Socialist Party (YSP), based in the South.

Considering the mistrust in the very process that is meant to lead the country towards permanent reforms and democracy, and in the very representatives guiding the transition, it is no wonder that Yemen is once more at the brink of tumult. The country’s unity, achieved in May 1990, after bitter struggle and war between a Marxist-Leninist South Yemen, and North Yemen, is now at risk. Equally as dangerous is that the south, although represented by the all-encompassing Al-Hirak, hardly speaks in one voice.

Al-Hirak itself is divided and at times seems incapable of taking one solid political stance. Following a statement in which Al-Hirak announced that they “completely withdraw from the conference (holding) all the parties that placed obstacles in our path responsible for this decision,” another statement surfaced on Nov 28, also attributed to Al-Hirak “denying the walkout and affirming that the Southern movement remains committed to the national dialogue,” reported Asharq Al-Awsat.

Yemen’s divisions are copious and growing, allowing the old regime to find ways to once more dominate the country. It could easily rebrand itself as the party capable of uniting all Yemenis and saving Yemen from complete economic collapse and disintegration.

Still empowered by the spirit of their revolution that underscored the resilience and discipline of one of the world’s poorest nations, Yemenis might find themselves back on the streets demanding freedom, democracy, transparency and more, demands of which nothing has been accomplished, nearly three years on.