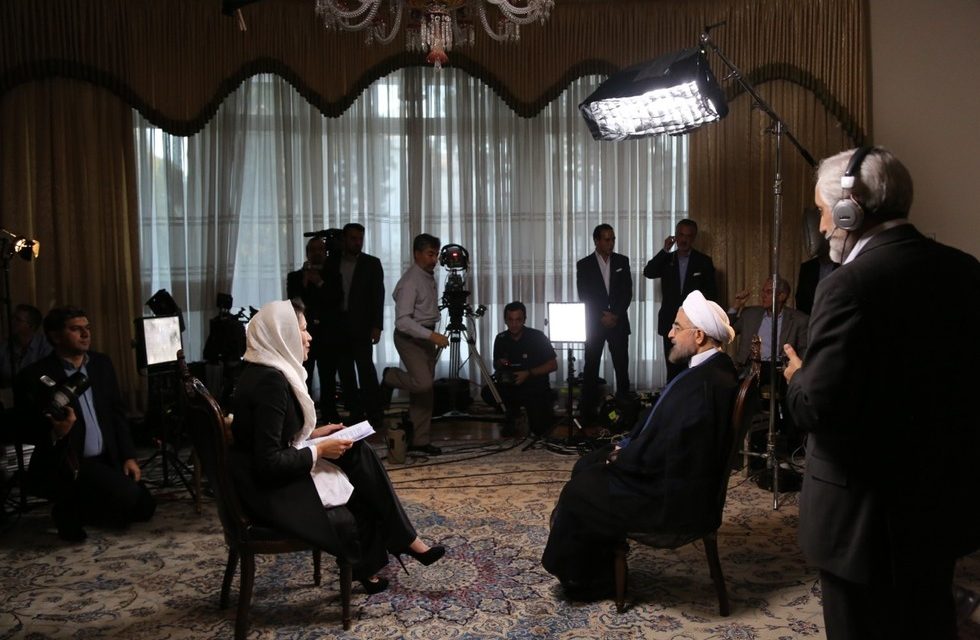 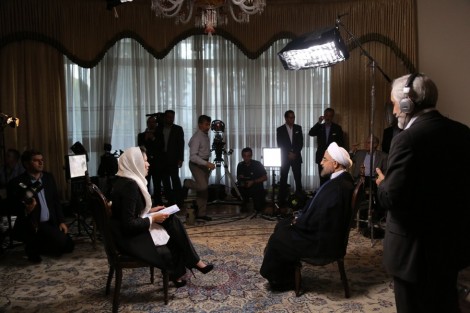 Speaking in Tehran to NBC‘s Ann Curry in his very first interview with an American media outlet, Iranian President Hassan Rouhani again – and repeatedly, considering Ms. Curry kept asking him the same question over and over – asserted Iran’s wholesale condemnation of nuclear arms and its commitment never to build or acquire such weaponry.

Rouhani’s statements were consistent with those of nearly every high-level Iranian official and diplomat over the past twenty years.

After Curry stated (totally incorrectly), “The world believes that Iran could build a bomb very quickly,” Rouhani replied: “We have never pursued or sought a nuclear bomb and we are not going to do so. We are solely seeking peaceful nuclear technology.”

Once wasn’t enough for Curry. She asked, “Can you say now categorically then, that Iran will not build a nuclear weapon under any circumstances whatsoever?”

So Rouhani repeated: “The answer to this question is quite obvious. We have time and again said that under no circumstances would we seek any weapons of mass destruction including nuclear weapons, nor will we ever.”

Again, Curry pondered, “So the answer is ‘no’?” After Rouhani again affirmed this point, she gave it another shot. “I want to make sure I understand. So the American public, so the world understands. If you can say categorically that Iran will not seek a nuclear weapon under any circumstances whatsoever. Is the answer to that yes or no, sir?”

Rouhani was patient. “The answer is that this country will never seek nuclear weapons.”

He added that “Iran wants nothing beyond what is defined in the Non-Proliferation Treaty (NPT) regarding the nuclear [rights] of countries,” a common statement often made by Iranian officials who understand that the Western demand on Iran to shutter or scale back its IAEA-safeguarded nuclear program is in itself a violation of Iran’s inalienable national rights.

In fact, Curry shouldn’t be so surprised by such statements coming from the top Iranian executive, as she has made a habit out of asking Iranian presidents the exact same question multiple times in a row and receiving the same answer.

When she interviewed President Mahmoud Ahmadinejad in September 2009, he told her (as noted in the above litany), “We don’t have such a need for nuclear weapons. We don’t need nuclear weapons. Without such weapons, we are very much able to defend ourselves… It’s not a part of our any – of our programs and plans.”

As a perfect example of how the mainstream media operates, after the interview, Curry published a summative report entitled, “Ahmadinejad refuses to rule out weapons.”

Two years later, when Curry again interviewed Ahmadinejad in Tehran, she asked the president directly, “Is Iran working on a nuclear warhead?”

Ahmadinejad’s reply was consistent, as always: “This is an old and repeated story. These are the same claims made by the U.S. administration many times. They have been repeating these claims for many years. This is not a new thing for us. In principle, we are against nuclear weapons because it is against our beliefs and ideology. We do not consider nuclear weapons as a useful weapon. The period or era of nuclear weapons is over… Can nuclear weapons offer solutions to the current international problems? Can they bring superiority for the nuclear states? Certainly the answer is ‘no.’”

He further stated, “We think those who try to build or make nuclear weapons, they are doing something absurd and useless. They only jeopardize their own situation and they waste the wealth of their own nations if they do it,” and explained that, as opposed to “a period of nuclear bombs,” today is an “era of humanity.”

Responding to allegations of a clandestine Iranian nuclear weapons program, he explained (as he always had): “We have integrity and are sincere in what we say because we are not afraid of any power and we do not need to conceal our intentions. If we want to build a nuclear weapon, we have the courage to announce it openly. We are not afraid of others.”

Still unsatisfied, Curry decided to repeat herself, asking, “Is the answer yes or is it no, with all due respect?”

When Ahmadinejad reiterated, “We do not need nuclear weapons and we do not accept nuclear weapons. We are against that,” Curry quadrupled-down, “So you’re saying the answer is no?”

Apparently, Ann Curry has trouble taking ‘no’ for an answer.  And yet, all we hear is that Rouhani’s unequivocal statement against nuclear weapons is something new and unprecedented. Clearly, it’s not.

Brian Williams, during tonight’s broadcast of NBC Nightly News, told his audience that Rouhani’s exclusive interview with Curry is “significant because it represents the first reason for any optimism, the first sign of any movement from Iran on the issue of nuclear weapons.”

What an absurd thing to say. Such is the scope of perception in the mainstream media.