Why Oppose a New War? 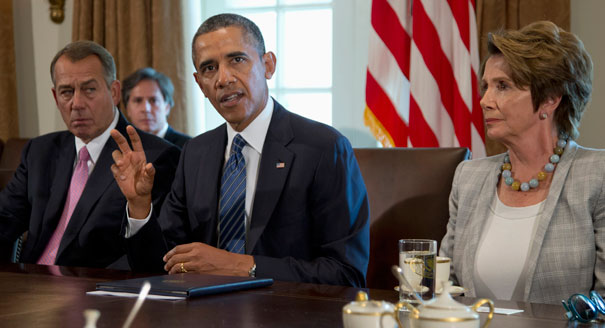 Despite Secretary of State John Kerry’s statement this week that there is “irrefutable” evidence the Bashar Assad government in Damascus ordered the chemical gas attack in Syria last month, no direct proof of this allegation has been revealed. The best the White House can offer are repeated assurances it has “confidence” or even “high confidence” that Syria (or Assad) used chemical weapons.

Proof or not, it is obvious President Obama is exploiting the crisis in order to deliver a staggering blow to the Syrian military in its fight against rebel armed forces. The New York Times reported Sept. 6 that “Obama has directed the Pentagon to develop an expanded list of potential targets in Syria,” ostensibly because Syrian troop movements. “That means expanding beyond the 50 or so major sites that were part of the original target list.” The White House says ground forces won’t enter Syria, just missiles and bombers. But at his press conference Kerry suggested “boots on the ground” couldn’t be ruled out entirely.

The United States has long supported plans to overthrow President Assad. In addition to helping train rebel troops and supplying logistics, Washington’s main effort has been to construct a viable organization and leadership to direct the military and political struggle of fractious oppositional groups. The repressive Saudi monarchy supplies most of the funding for anti-Assad war. Two of the major armed groups have ties to al-Qaeda, which complicates, but does not terminate, the U.S. mission.

Why has Obama casually informed the American people that he is “comfortable” about bypassing the U.N. when he launches a war against a country that presents no threat to the United States? This means that any attack by the U.S. on Syria will be judged by an international law — to which the U.S. is a party — as an unjust, illegal war.

The main reason is that Russia and China both oppose American plans to toss a match into the tinderbox of the Syrian conflict that could ignite a fire throughout the region and they both will veto support for Obama’s impending attack. The U.S. is demonizing Russia in particular for thwarting administration ambitions in Syria. Moscow and Damascus have been close allies for decades, and Russia sensibly believes the U.S. objective is regime change, not democracy. Washington’s wars against Iraq, Afghanistan, and Libya fall into that category as well.

Another reason, evidently, is that the world body is likely to probe quite deeply into the evidence Washington offers because of the lies told to a gullible U.N. General Assembly by the Bush Administration. The U.N. would also seek to clarify the actual number of casualties from the recent attack (the death count ranges from 350 to Kerry’s total of 1,400).

Most of the American people oppose Washington’s plan to attack yet another small and weakened Muslim country. According to opinion polls, the strongest opponents of a new war happen to be Obama’s major supporters — women, liberals and African Americans. True, libertarian and isolationist Republicans also oppose the war, but Obama’s main problem is the Democrats.

Nearly the entire U.S. antiwar movement has taken a stand for peace. They remember the mendacities that led to many years of war that have yet to end. The ANSWER Coalition is a leading force against attacking Syria, having already mounted nationwide demonstrations in various cities and it will stage a major protest in the nation’s capital Sept. 7.

In a statement Sept. 5, ANSWER national coordinator Brian Becker declared: “Obama, Kerry and the mass media are working overtime to conjure up the image of ‘inevitability’ in order to demoralize and paralyze the antiwar opposition that clearly represents the sentiment of the vast majority of the people in the United States.

“We reject the concept of the inevitability of this attack. All power does not rest in the hands of the war makers. The people oppose this next war. We must organize and organize and organize. Right now there are deep divisions within the summits of the political and economic establishment about the reckless act of aggression being planned against a country in the heart of the Middle East. Such opposition is not based on principle but rather fear that once the war starts it is impossible to know what regional and possibly global chaos could follow. Under such political circumstances, a mass opposition can have a decisive impact even inside the centers of world imperialism.”

Clearly, chemical gas was used — a hideous crime — but there is considerable room for doubt regarding the guilty party. A serious, independent investigation is called for, but Washington will have none of it. An important sector of world public opinion is not convinced that President Assad or any top government officials gave the order. It could have been a dissident military faction acting on its own to disgrace Assad, or a put up job by al-Qaeda-affiliated elements within the opposition to provoke the U.S. into launching an attack. Even Kerry acknowledged that some 20% of the opposition aligns with al Qaeda.

Doubts about the “irrefutable” nature of Washington’s evidence are based on a couple of obvious assumptions, the main one being: Assad is not illogical. He fully understood that if he ordered a gas attack it would cross Obama’s “red line,” leading anywhere from an increase in U.S. support for the rebels to massive retaliation. It would be irrational of Assad to order the use of militarily unnecessary poison gas knowing it could trigger his defeat.

Precisely why Obama has decided to bomb Syria at this point is not entirely clear, but two possible reasons come to mind:

1. He fears being regarded as weak politically at home and that the U.S. will be seen as a “helpless giant” abroad if he does not act violently after implying he would do so if an arbitrary “red line” was crossed. Supposedly, Iran, Russia and other will thereafter just thumb their noses in mockery. This is absurd, given Washington’s military might.

2. He was propelled to take action because Syrian government forces were winning. Kerry suggested that opposition forces are getting stronger, but that was untrue. The government army has been advancing for months, despite the flow of jihadists from around the world joining the rebel ranks. Any U.S. attack will help the opposition. With the tide turning significantly in its favor, why would the Syrian government intentionally take the one action that would provide the U.S. with a “justification” for inflicting damage on its military?

Ironically, Obama fears the actions of the Assad government far less than he fears what would happen if the jihadist faction in the rebel army he supports ultimately get their hands on Syria’s storehouse of chemical weapons. That explains Obama’s recent statement about the danger to America from Syria’s weapons.  Obama named no names in order to keep Assad as the target, but he really meant that the danger is not from Assad but al-Qaeda affiliates in the opposition forces.

The Obama Administration has supported the rebels from the beginning, along with Saudi Arabia, the United Arab Emirates, Turkey and some other Sunni Muslim countries against the Alawite government of Assad. The Alawites are a branch of Shia Islam. The main reason for concentrating on Syria is to weaken Shia Iran, the real target. Two regional countries are close to Iran — Shia Iraq and Alawite Syria.

If Syria falls, Iran will lose a key ally, and jihadist forces will then turn on Iraq. They already are largely responsible for the virtually daily terror attacks in Iraq. Obama thinks he can eventually replace Assad with a moderate leader of a unified opposition, but the jihadist “20%” is not playing along. They want more power and have demonstrated little concern for democracy or tolerance toward other sects and religions.

Washington war hawks, within and without the administration, have been calling for the U.S. to go to war against Syria for a year. They are anxious to weaken Iran. Israel, which has had reasonable relations with Assad, openly backs Obama’s looming attack on the grounds that it will punish Iran.

Obama’s probable attack will have little to do with chemical war and nothing to do democracy. His effort to round up a “coalition of the willing” is faltering, not least because this objective is suspect. U.N. Secretary-General Ban Ki-moon and the Pope both vocally opposed an attack. Over a dozen years of needless Bush-Obama wars has depleted the willingness of a number of countries and leaders to bend the knee to Washington’s endless penchant for military conflict.

Obama evidently had no intention to consult with Congress, which was on vacation when the martial decision was made. But intense political and public criticism induced him to do so. His minions in Congress and the White House have since been twisting every arm in sight to get a majority of Congress behind his war. He will then declare, in one way or another, “It is the will of the American people that has made this decision to punish a despicable regime that uses poison gas on its own people.”

Instead of a war, the nations of the world — acting through the U.N. — should encourage both sides in Syria to observe a cease fire and enter into negotiations to end the mayhem. In the past the Assad government indicated it would take part in talks. Russia also said it would support talks. Unfortunately, the faction-ridden opposition has previously spurned efforts to join talks. But if the U.S., Russia and other influential countries and organizations joined together in honestly calling for a cease-fire and talks, it may work this time.

A war can still be stopped. But all this is happening in a matter of weeks. Time is extremely short and while the majority of Americans want peace, most seem unaware of the facts and all too prone to being influenced by the pro-war media and Congress members of both parties. It will take a mighty effort by the antiwar forces to stop this war.