Damascus Notes: A Meeting with Syrians on the Street Well-Informed of US Plans for Their Country 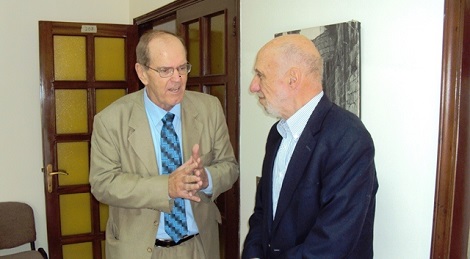 Where was Professor Richard Falk when I needed him?

DAMASCUS — This observer judges that the Persians, whose bright, articulate students are well known internationally, and with whom he has been honored to discuss international politics on several occasions, may well have met their intellectual match with the Syrian Arabs. This conclusion is based on what is happening among the public in Damascus, not just in the universities and schools, but during impromptu “marketplace of ideas” sessions increasingly taking place on the streets and in coffee houses and places of public gathering.

Last night was one example.  Way past this observer’s bedtime, some friends came to see me and wanted to sit outside “for a few minutes” to discuss the latest speculation from Washington and St. Petersburg. We ended up sitting on concrete slabs that divides Al Bahsa Street where no cars are allowed in front of my hotel for more than three hours!  Miss Hiba, a wild and wonderful Palestinian journalist born in Yarmouk camp, interpreted for us. The congregation very quickly grew as a few soldiers, shabiha, and national defense force types showed up to see what was going on. Some even joined in the fast moving animated discussions.

There were several students and neighborhood residents assembling and at the start of the “seminar” it quickly became obvious that Syrians are carefully tracking developments in the run-up to the widely expected “9/12/13 black Thursday” now less than one week away. It is this date when many Damascenes and foreign observers believe the American attack will begin.

As a backdrop, for certain, life appears on the surface fairly normal, but tensions are rising and people are alarmed at the prospects of an American attack. This observer was educated by these Syrians about many views of the conflict raging here and how events locally and internationally are apt to unfold.

One sentiment that is virtually unanimous here is that very few, if any at all, credit the White House smooth talk to the effect that the purpose of the American attack, without the benefit of UN Security Council approval, is to be very limited and short and is only designed to send a message or punish the Syrian leadership, even though the last couple of days the President’s team is using the word “degrade” (as in demolish and utterly destroy) frequently.

An elderly gentleman who owns a pharmacy around the corner explained, “It’s regime change here and in Tehran and nothing less!  They will bomb anywhere at will because their top 75 listed targets have already been emptied and keep shifting.  We are all working to provide Obama with no targets.”

This observer was dumbfounded by the sophistication and quality of interventions by the impromptu gathering. One student preparing to return to classes late this month at Damascus University rattled off statistics regarding the Congressional vote prospects and explained to the growing assembly that the House of Representative count as of September 4 were 47 members of the House as firm or inclined to a yes vote, 187 firm or inclined to a no vote, and 220 unknown or undecided. Then she expressed her view that she was pretty certain that the President will be forced to withdraw the resolution or postpone a vote in the House.

Another lady, who I have seen around my hotel garden, mentioned yesterday’s report in the Washington Post that the Conference of Presidents of Major American Jewish Organizations has linked with the Israeli lobby AIPAC in an all-out public campaign for a U.S. war on Syria.  I had no idea about this and wondered how she was so current with her information.  She then explained, “So far, only 21 senators have said they support or are likely to support the Obama resolution, thirteen have said they oppose or are likely to oppose the resolution, while 66 votes are undecided or unknown.”

The question that ended our gathering early this morning was when one young man, presumably a law student, zeroed in on this observer and started reciting from memory, not a summary mind you, but rather word for word,   Article One, Section Eight, Clause 11 of the United States Constitution: “The Congress shall have Power To declare War, grant Letters of Marque and Reprisal, and make Rules concerning Captures on Land and Water.”

He then explained that the particular passage provides no specific format for what form any legislation must have in order to be considered a “Declaration of War” nor does the Constitution itself use this term.

Then came the zinger, “Sir, can you compare and contrast this Article and Clause with the 1973 War Powers Act and share with us your interpretation of both with respect to what your President is threatening to do to my country?”

I did not know where or how to begin to answer the gentleman. I started to mumble something like “that’s an excellent question, can we meet later to discuss it because it’s very late now.”

But just as I glanced at my watch and noticed it was 4:28 a.m., mercifully, we all heard the Adhan, (Islamic call to prayer) which is called out by a muezzin from the nearby mosque.  The somehow reassuring strains, even a bit eerie, wafted around us. It was time for al fajr (Dawn) prayers.

It was this observer’s very good luck and I could duck the question.  The soldiers on the street fell silent and listened and became contemplative. One can only imagine their thought about next week’s likely American bombing campaign. They started to disperse as did about half of the assembly.

I was saved. No thanks to Professor Falk.

The people of the Syrian Arab Republic are politically very sophisticated and amazingly well informed about the details of the current crisis and with specifics about external players and their plans.

One can only wish the Syrian people well and join with them and all people of good will, as many Christians and, reportedly more Muslims will do, for the day of fasting and prayer that his Holiness Pope Francis has called to be observed on September 7, 2013.