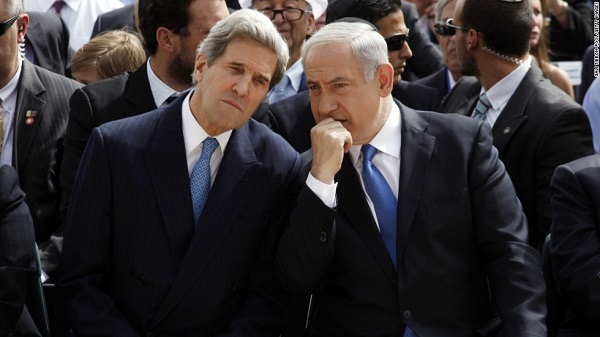 US policy toward Israel's illegal colonization of the West Bank, including East Jerusalem, is rhetorically of mild opposition but in deed of strong support.

The U.S. policy towards Israel’s illegal colonization of the West Bank, including occupied East Jerusalem, is rhetorically one of mild opposition but in deed of strong support. This is perfectly evident, but I need to point it out anyways, because the U.S. media, which serves the propaganda role of manufacturing consent for U.S. policy, refuses to do so.

When Israel announced plans for once again expanding its colonization last week, the best U.S. Secretary of State John Kerry could do was express his “concern” that it was “not helpful” for negotiations with the Palestinians. He said he made clear to the Israeli government that the U.S. saw its settlements as “illegitimate”.

Officially, the U.S. government, like the rest of the planet, recognizes Israeli settlements as illegal. But in practice, the U.S. supports this Israel’s colonization, such as by refusing to call it “illegal” and not only refusing to hold Israel accountable for its criminal activity, but actively blocking the international community from attempts to do so, such as the Obama administration’s vetoing of an uncontroversial U.N. Security Council resolution condemning Israel for its illegal settlement activities.

Kerry also said that Israel’s expansion of its illegal settlements was “to some degree expected” — a considerable understatement. Naturally, when the U.S. government communicates to Israel that while it must for public relations purposes express some kind of mild opposition to them, but that if it continues, the U.S. will nevertheless continue to support it, with no end to the the $3 billion in military assistance it provides to Israel annually and continued use of the veto to protect Israel against being held accountable for its crimes, then it should hardly come as a surprise when Israel chooses to continue doing it.

As a State Department official told Haaretz, “It would be fair to say that you are likely to see Israeli settlement continue.” To “some degree” expected, indeed! U.S. policy guaranteed that this criminal activity would continue.

The Obama administration has been nearly explicit about giving its nod of approval for Israel to continue its colonization, by demanding that the Palestinians negotiate “without preconditions”, which is a euphemistic way of saying that they must negotiate with Israel while its settlement expansion continues. The U.S.-led so-called “peace process” itself is a framework wherein any application of international law is rejected. This is necessary, because Israel wants to negotiate not from a position of what it is legally entitled to, such as in terms of land, but what it wants. This is also why the U.S. is so opposed to the Palestinians going to the U.N. and filing a complaint against Israel’s ongoing crimes with the International Criminal Court, since that would reduce Israel’s leverage to use oppression and violence to steal more Palestinian land and to punish the Palestinians into surrendering to its demands.

The reason the talks will fail is because even if the Palestinian leadership under President Mahmoud Abbas was willing to betray his people by surrendering Palestinians’ rights and acquiescing to Israel’s demands, the Palestinian people will not allow him to, particularly not when they know they now, since Palestine became a non-member observer state at the U.N. General Assembly, have recourse to the ICC and other legal mechanisms to seek remedy for Israel’s violations of their rights.