Palestinian Refugee Camps In Syria Taken Over by Salafi Jihadists 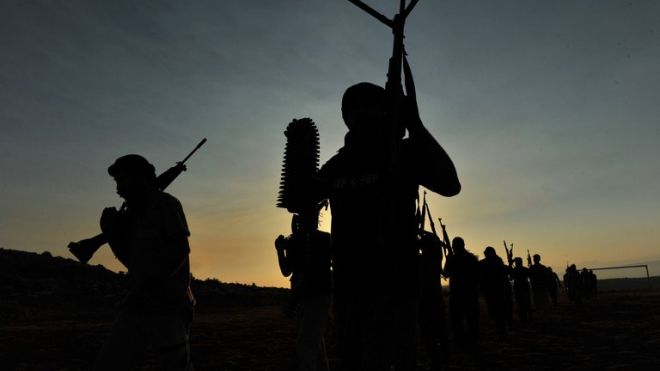 But the camps quickly become petri dishes, and the explosive growth of the foreign implantations is sometimes dazzling. By the time government supporters report the camp invaders it’s too late. And what can the government do anyhow? Guns appear everywhere, and suddenly it’s no longer ‘nicely nicely’ polite treatment from the Islamic brothers. Residents are told they must help liberate the camp from the Assad regime or face the wrath of Allah. Consequently, fleeing for one’s life becomes of utmost urgency, often literally as the snipers arrive and intense fighting and rooftop targeting ensues.

So what happens next to the Palestinian camps in Syria? Is a hopeful, positive or peaceful resolution possible? This observer’s two-cents worth of analysis suggests that the answer is no. The camps will stay largely under the domination, militarily and socially, of the jihadist elements that continue building fortifications and ‘digging in.’ What is happening is a God-awful calamity, one being foisted upon those whose only prayers and wishes are to leave Syria and return home to reclaim their stolen lands.

A central question is the precarious situation in Yarmouk and the fate of the 18-20 percent of its population still remaining. These are people risking their lives daily trying to avoid snipers from both sides. One can hear speculation on the prospects that the Syrian Army, aided by Hezbollah, will move on Yarmouk to try and expel the rebel militia. Some PLO officials with offices inside the Yarmouk neighborhood claim that Ahmad Jibril’s PFLP-GC is being beefed up and armed by the government with more than just AK47’s and RPG’s. Last winter, some of Jibril’s forces were expelled when they tried to eject the foreign militia, while others, as mentioned above, went over to the opposite side. At the same time, three PFLP-GC commanders quit over tactics while questioning Jibril’s decision to violate the camp’s neutrality, a decision leading to the destruction of parts of Yarmouk.

As to speculation on the possibility of the Syrian government and/or Hezbollah moving to eject the foreign forces from Yarmouk, this observer does not give the reports much credit. The Syrian Army has more urgent and prioritized battles being waged today, with others being planned. Hezbollah, likewise, is facing challenges at present, and fighting in Yarmouk against unknown numbers of rebel militia would surely add to them. Moreover, any force invading a Palestinian camp faces being roundly condemned over violations of the Cairo agreement forbidding host governments from entering UNRWA refugee camps.

This observer and contacts in the Palestinian community cannot verify the recent report for a foreign media source that al Nusra has fled Yarmouk and is on the run. On the run from whom? Currently they are not being seriously challenged. On the contrary, the al-Qeada affiliates are busy digging more tunnels under the camps to store weapons and move freely. Their ranks are growing not dwindling.

Grim as it sounds, they who reside in Syria’s camps, along with the 12 million Palestinian refugees worldwide, will continue to be at the mercy of events they had no part in creating. It is a fate they share at this moment with much of the rest of Syria’s population, and things are not likely to improve in the immediate term.

But on a more positive note, the Palestinians of Syria persist in their resistance and opposition to the illegal occupation of their country. Theirs is a determination to return to their homeland that simply will not fade or wither, and speaking with Palestinian refugees these past several days in Damascus and Homs has convinced this observer more than ever that on this they will not retreat a single inch—and that in time they will liberate their country.