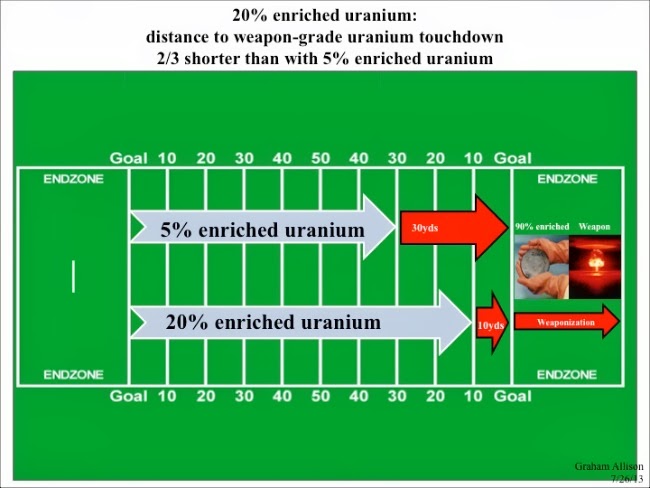 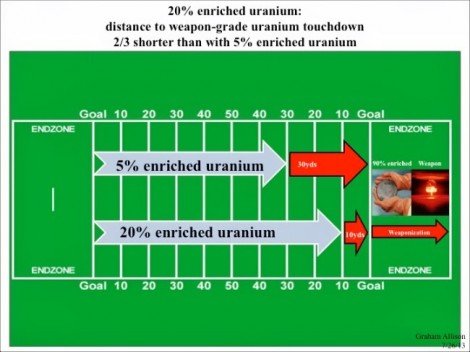 With just days until the inauguration of Hassan Rouhani as Iran’s next president and a new round of unilateral sanctions recently passing the House of Representatives – measures drafted and demanded by right-wing, pro-Israeli pressure groups, designed deliberately to destroy any chance for positive diplomatic overtures and set the stage for a war – speculation and prognostications are again swirling around regarding both the Iranian nuclear program and the potential of a military attack on Iran.

Of course, this is nothing new. In fact, this kind of thing has been happening for years now. It’s simply part of the same, never-ending loop of fear-mongering and threats heard again and again in perpetuity.

The latest, overwrought, bromidic claptrap published by a mainstream media outlet is an article in The Atlantic written by Graham Allison of Harvard University’s Belfer Center. Entitled “Will Iran Get a Bomb—or Be Bombed Itself—This Year?“, Allison posits and attempts to answer “12 key questions about Iran’s nuclear challenge,” which is apparently code for “efforts by the United States and Israel to force Iran to relinquish its inalienable national rights by explicitly abrogating international law.”

The article was adapted from a recent lecture delivered at the Aspen Security Forum, an annual gathering of imperial apparatchiks and their fawning acolytes in the press and pseudo-intelligensia. It relies heavily on a gullible audience ignorant of the history and reality of the Iranian nuclear program.

For Allison, tautologies flow freely. Specious reasoning bolsters spurious claims. A rhetorical wager is made as to whether or not Iran will be bombed before December 31, 2013 without any mention of the fact that such an act would unequivocally be a war crime of the highest order. He spouts Israeli talking points about Iranian intent and progress and utilizes to maximum alarmist effect terminology that has no technical legitimacy, such as referring to 19.75% low-enriched uranium as “medium-enriched uranium,” simply because it sounds scarier. The term “medium-enriched uranium” does not exist in the official nomenclature of the International Atomic Energy Agency.

Allison also repeats the common error that Netanyahu warned in 1992 that Iran was “3 to 5 years” from a bomb. While there were plenty of other Israeli predictions made in 1992, most of them claiming Iran would have a nuclear bomb by the end of the decade (matching the assessment of the NIE at the time), Netanyahu’s time frame was not among them. He issued his estimate three years later, in 1995.

Never once is international law or the potential cost of a military strike in human lives even alluded to. Allison doesn’t acknowledge that Iran has never once been found to have violated its obligations under the Nuclear Non-Proliferation Treaty and that even issuing threats against another state is a breach of the UN Charter.

Furthermore, meaningless graphs and visual aids with bizarre football and mushroom cloud imagery are presented as serious analysis. It appears that “end zones” are the new “red lines.”

While Allison correctly notes that the U.S. intelligence community has determined no decision has been made by the Iranian leadership to actually manufacture a nuclear weapon, never for a moment does he question the presumption that Iran desperately wants to acquire an atomic arsenal, despite the fact that no credible evidence has ever been presented to back up this allegation.

Allison, in his finite wisdom, concludes that Iran will neither obtain a nuclear bomb nor get attacked by the end of this year, which is no real feat of foresight considering Iran isn’t even building a nuclear weapon and has no nuclear weapons program. Any rational observer of these issues is also well aware that, hysterical headlines aside, no one is going to launch a military assault on Iran, especially not Israel.

The assumed ‘bomb or be bombed’ conundrum is, in fact, a false dichotomy resulting from myopic and prejudiced (and jaundiced) thinking. It’s also old news; a false choice presented as the only potential future, articulated by commentatorsand government officials alike for years now. The Economist ran a story back on December 3, 2009 with the headline, “An Iranian nuclear bomb, or the bombing of Iran?“, pondering, “So which will it be: a war with Iran, or a nuclear-armed Iran?”

Three and a half years later and this is still the best the Iran Expert Industry has to offer?

With expert analysis such as this from the director of a leading policy institute run by an Ivy League school, it is no wonder the public discussion here in the United States regarding Iran is not only often juvenile and uninformed, but also disingenuous and, ultimately, dangerous.

This article was originally published at Muftah and has been used here with permission from the author.