A Formula for Palestinian Survival in Damascus: Will It Work? 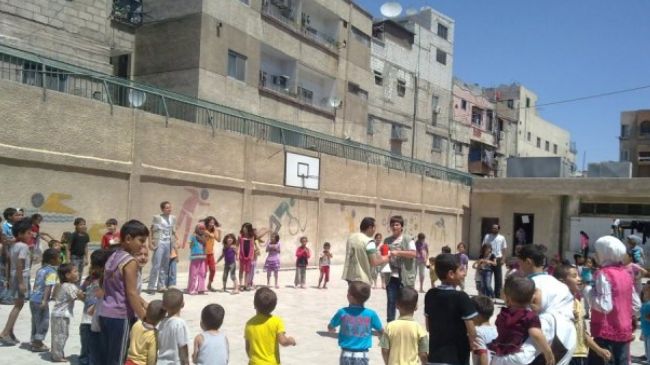 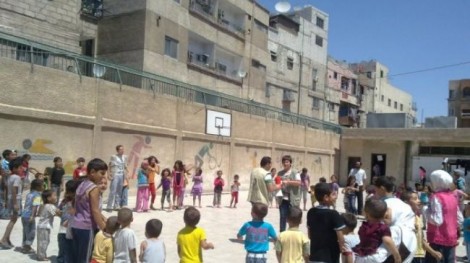 Western side of Yarmouk Camp, DAMASCUS — For more than a year, Yarmouk Palestinian refugee camp, one of nine in Syria, has been a war zone between supporters of the Syrian government and those seeking its overthrow. But the number of camp residents actively engaged in fighting on either side is negligible, according to Dr.  Hamed Mouad.

Mouad is author of the first book on Yarmouk camp history and its sociology. Many of his relatives are camp residents, or were at any rate, until they had to flee eight months ago. Despite great pressure to help “liberate” the camp—pressure put upon them from both sides of this war—the residents here, insisting on neutrality, overwhelmingly refused to join either side in the conflict. And for this they have paid a big price.

All “legal” entrances to Yarmouk and its neighborhoods are blocked by the Syrian army or rebel gunmen, and government and rebel snipers inhabit many rooftops. However, along the western side it is possible to enter some parts of the camp with the assistance of a friendly teenager. Approximately only 20% of the 170,000 who lived in Yarmouk pre-crisis have remained, with a majority of those seeking housing outside in Damascus suburbs. Many parts of the camp are now largely a deserted wasteland, and most residents remaining have little or no water, electricity, or safe camp infrastructure or shops of any sort. The Syrian government, however, continues to allow free medical aid at public health facilities, and the Syrian Arab Red Crescent Society (SARCS) helps many with food parcels.

Palestinians interviewed inside this western area of Yarmouk explain that the only reason anyone still remains at all is that they have run out of options. They risk their lives daily, a sort of Russian roulette fate in view of snipers and mortars, to remain in what is left of their homes—either that or they camp out near the piles of rubble that were their homes. Still others try to survive outside the camp, squatting on blankets, flattened cardboard boxes or plastic tarps, in the shadow of schools and mosques. There are even some fortunate families who have a small gas burner to cook with.

Damascus experiences very high summer heat, far exceeding temperatures commonly seen in Beirut and Saida Lebanon, where many of the Palestinian refugees from Syria have fled—many but by no means all. For inside the Syrian capital can be seen additional Yarmouk residents, lots of them, milling amongst the more than one million refugees who have fled here from other parts of the country over the past nearly 29 months. A few of these desperate people drape some blankets in alleyways, gambling that the authorities will not roust them, or fearing, even worse, that they may become victims of robbery or kidnapping. In Damascus, kidnapping has especially become a significant business.

Damascus cops, some of them at any rate, will on humanitarian grounds allow people to sleep in a few of the city’s smaller, more inconspicuous playgrounds or green spaces, a policy applied as well to Roma Gypsies, whose main neighborhood was destroyed. But this lenience stops at the borders of the main parks, which are probably the most beautiful and manicured, even during the current fighting, of any Arab country in the Middle East. In these parks, camping is not allowed. Yet that being said, when a mortar or car bomb demolishes part of a street, some of its residents do spill into the central parks, reminding this observer of how many times since the Lebanese civil war and Israeli aggressions that Beirut’s  Saniyeh gardens in Hamra has been overcrowded with refugees living rough.

Classes will start in Syria in less than a month, meaning that school buildings will no longer be available as temporary refugee shelters. Some Palestinians, like their Syrian neighbors, are still fleeing to Lebanon, but the government has recently raised the exit fee at the Masnaa border crossing from 550 Syrian pounds to 1,100 (roughly $6) per person—not a big bite for most foreigners, certainly, yet for Syrian and Palestinian families hoping to postpone death, it is a rather hefty, nigh unaffordable, chunk.

Though it’s hard to generalize, many residents of Damascus, including some of the remaining Palestinians, seem to feel the violence will continue slowly to subside as government forces go on pushing rebel forces further away from the city center. This appears also to be the case with Syrians as a whole, despite the fact that the population is numbed and exhausted, horrified at what has become of their country, and pessimistic about the future of their beloved Syria and its chances at remaining intact. Most of course have suffered incalculable losses—tragically in terms of killed loved ones, but there are also material losses, losses of livelihoods, jobs, and businesses, without much prospect for recovery, at least anytime soon.

Nonetheless, there is exhibited a sense that life may soon improve.  Mazin, the driver for Al Alam TV, explained to this observer the other night: “It may seemed strange, but we Damascenes hear more shelling these days as  government forces push rebels out of some of the  suburbs, but we also feel more secure despite more shelling because the rebels are being driven back away the our suburbs.  But there is a long way to go.”

As signs of approaching better times, some people point to Ali Haidar, Syria’s Minister for National Reconciliation, seen frequently in public these days discussing plans being put into place for the return of the Syrian and Palestinian refugees. Another example is President Bashar al-Assad’s August 1 visit to the town of Daraya. Located outside Damascus, Daraya was a rebel bastion for more than a year. Now it is mainly under government control. It was the Syrian President’s first such public trip since his March 12, 2012 visit to Baba Amr in central Homs—a location which ironically yesterday saw a huge explosion at a government weapons depot in which approximately 50 people were killed.  A defiant speech nonetheless was given by Assad, who pledged victory over  forces seeking to topple Syria’s government, and he seems to have buoyed some as he chatted with soldiers, expressing the country’s gratitude for its military’s performance. This kind of connecting with the general population is replicated by an increasing number of Syrian officials, officials who are being seen more and more in public outside their heavily protected offices. While not a complete restoration of public optimism, it does seem to offer hope for an end to the civil war.

As the pendulum swings, at least for now, in favor of the current regime, Syrian and Palestinian friends and acquaintances still express dismay, for more specifics are becoming apparent in regard to what they may face should the extreme Islamist, Salafist and Wahabist forces ultimately prevail and set up a Salafist caliphate. Just this week, for instance, a sharia committee in the rebel-held region of secular Aleppo banned the baking or eating of croissants, this despite shortages of bread. The reason given? The French croissants, according to some Salafist-Wahabist “scholars,” are secret symbols of colonial oppression. The belief of the leaders of Jabhat al-Nusra and the Islamic State of Iraq and the Levant, both affiliated with al-Qaeda, seems to be that because Syria is a former French colony, this symbol of Frenchness is obviously connected with imperialism. And of course the pastry’s crescent shape celebrates European victory over Muslims. Conspiracy theorists abound everywhere, it seems.

Also, various groups increasingly are issuing fatwas designed to ensure that the planned new order dismantles the current secular Syrian society, the sooner the better. Over the past several months a raft load of Fatwa’s, which apparently any wannabe Islamic “scholar” can issue when in the mood, has included just about the wholesale importation of Saudi Arabian culture and lifestyle. In fact, some of these Fatwa’s make the KSA appear almost moderate.

Within the past few months, Rebel-held regions of Aleppo have become more and more dominated by extremist elements, further marginalizing more moderate rebel groups, and putting many Syrians at their mercy. The Islamic law council of Aleppo’s Fardous neighborhood recently issued a fatwa banning all women, not only Muslims, from wearing “immodest” dress. This includes not only tight-fitting clothing but also a ban on cosmetics. Another Fatwa decrees a one year jail sentence for failing to fast during the month of Ramadan, again, Muslim or not.

In the face of this decidedly dismal backdrop, the PLO leadership in Ramallah is reaching out to Palestinians in Syria, as well as to the Syrian government, with a proposed solution to the current Palestinian refugee crisis, a crisis that for the moment, despite hopeful signs, continues to worsen. Reportedly a four-member delegation was sent to Damascus at the end of July from PA headquarters in Ramallah. Upon arrival, the envoys presented the 14 Palestinian factions in the Syrian capital with a two-step initiative to end the fighting in Yarmouk. A copy of the “secret plan” was obtained by this observer. The proposal has, on good authority, been approved by the Syrian government, with a decision expected from the PLO groups during the first half of August. Meant to build on Mahmoud Abass’ July visit to Lebanon, the PLO declaration reads essentially as follows: