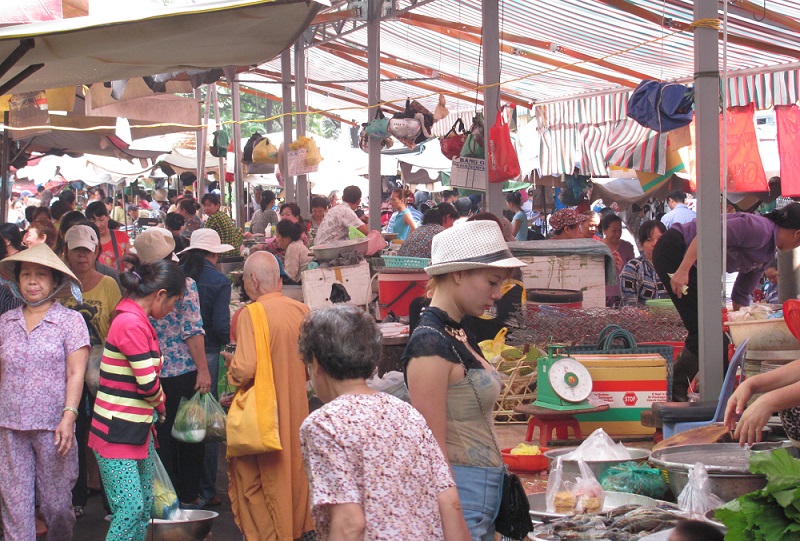 “Where you go? I take you boom boom pretty lady, good smoke,” the driver said to me.

“Xa Loi Pagoda, please,” I said bluntly, who threw a helmet to me, disappointed that I would not take part in some form of debauchery. This must have influenced his riding technique.

We swerved through gaps and ran red lights at leisure. In Saigon, this is tantamount to kamikaze road behavior and begs for an accident, but somehow nothing came of it. I found it more amusing that he was able to accelerate to greater than 40 km/h, in spite of all the traffic. Amidst the motorcycles pushing to move forward, he squeezed into non-existent empty spaces, laughing off the occasional aggressive word directed at us. This is all in a day’s work for a motorcycle rider.

The Xa Loi Temple is hidden in a small back street just outside of District 1. I paid my rider the fare, complete with my baby-like Vietnamese language pronunciation of “Cám ơn”, (pronounced gahm uhn, meaning ‘thank you’). He ignored my attempt at gratitude, as if to say “I did not save your life.” However, he watched on in amusement as a small girl cursed me at the temple gates for not buying incense sticks. I mistook her for a regular street beggar. When I discovered that nobody else sold them, I returned to her and asked for a packet. She agreed, but for an increased price. Having been conned by two so-called monks, my descent into a clueless tourist convert had now commenced.

In front of the main monument, I lit the wrong end of the sticks. I knelt incorrectly and embarrassed myself by interrupting other attendees, asking them what order I should undertake the ritual. After I had fished praying, the xe om driver who brought me to the pagoda walked up to me and asked if I was married. When I said no, he added, “What woman would marry a man who cannot light his stick?”

I was taken aback. All I wanted to do now was seek refuge in the temple, where I could safely reflect upon my encounters with the bogus monks and hope for enough moral strength to get me through the day. After finishing my tasks, I stood on the balcony and stared intently at a durian tree while listening to the sounds of children laughing and screaming from a nearby primary school, before a bell started ringing. Finally, from the peaceful surroundings of a temple, protected from the hectic street life in Ho Chi Minh City, I started to form an image that I could identify with. All I needed was to see a monk. Instead, two local women, introducing themselves as Thao and Tran, joined me. They wanted to know my motivation for coming to Vietnam and what I thought of the country. My explanation was brief, saying that I had been once before and had wanted to return. They showed me samples of bracelets, necklaces and baby clothes they made as part of their small business enterprise.  The bracelet was made of fiberbrush and tiny bells with intricate and colorful designs.

As Tran handed me a business card in the shape of a basket, an elderly monk appeared from a room. He looked like the same guy that I donated money to at Ben Thanh Market. But Thao refuted my claim.

‘No, not the same person. This man never leaves pagoda,’ Thao explained to me. ‘The monk you talk about pretends to be a monk. Wait here.”

She disappeared down a hallway and into a nearby reading room, returning one minute later with accompanied by another monk with a chubby face. The two had a brief chat in English about the man I had spotted at the market. He confirmed my fears.

“We know that man who begs, he pretends to be monk so he will get money. You should not give him any.” the monk said to me. “We call him the Market Monk.”

When I raised the point about the monk who took my iced coffee, once again he confirmed that the man in robes was an imposter.

“That man is The Thieving Monk”, the chubby monk said. “Where did you meet him?”

“In a café near Ben Thanh Market,” I said.

The chubby monk nodded his head. “You should stay away from him.” He then smiled and walked away to the reading room.

“Was that the leader?” I asked. Tran nodded and said to me, “We call him the Queen of Monks because he is beautiful, always smiling.”

I did not notice a smile on his face when he warned me to keep away from scammers in robes, but maybe that was the whole point. And then I recalled the sentence that the lady said to me earlier in the day, “Poverty encourages desperation.”

In this city, it seems that every monk has a name. Today it was clear what my name was – mud.