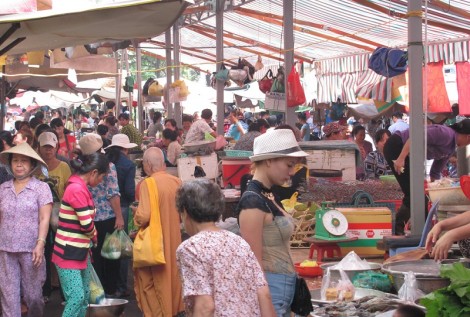 In the lead-up to Tet, the aisles of Ben Thanh Market in Ho Chi Minh City, Vietnam, are tough to navigate through. It requires patience and tact to squeeze between shoppers clamoring for food, gifts, and ornaments. Catfish wrestling in empty plastic tubs wriggle to the beat of loud pop music, while battling with stall owners bargaining with vendors. The entire country seems to be on the move to ancestral homes in country provinces, preparing for massive parties. For the uninitiated, Tet is a festival with the importance and activity of Easter, Christmas, New Year’s Day, and Independence Day rolled into one.

Amid the chaos, I am drawn to the sight of an elderly man standing in a middle of an aisle, even though passers-by seem to be avoiding him. Perhaps his wrinkled face presented a snapshot of wisdom, which does not fit in with the fast-changing commercial hub of Vietnam. Or his grey and orange wrap-around robe, a symbol of the faith he represented, fit in well. Instead of holding out alms for collecting money, he cupped his hands together. He must be a monk, I thought to myself. But why people favored crabs, catfish, and cabbages over humanity was something I could not comprehend. Inspired by the spirit of Tet, I made it my mission to demonstrate a good example to others in the market and donate some money. As expected, I questioned my logic and sanity. Was he really a monk? The color of the monk’s robes were not consistent with the mustard and burgundy colors I regularly associated with Buddhist monks. Maybe it was a different sect of Buddhism. But I remained determined to put my good deed into action, have it noticed and start a chain reaction.

I waited for him to face me before approaching him. It’s all about timing, I reminded myself. Five minutes passed; plenty of shoppers were more interested in looking at the ground as opposed to his face. I was not getting attention, either. Reaching into my pocket, I pulled out a 20,000 Dong note ($1), and took five measured steps forward. I felt confident in holding my money out far enough to be seen without being concerned about being robbed. A few more steps, but still no eye contact from the monk. So much for timing and tact; it was now time to be brave and break with conformity. Just put the money in his hands, greet, and be gone. No time to worry about personal glory and being showered with praise. This is a market, I told myself.

As I got to within two steps of the monk, he finally recognized me, cupped his hand, and smiled. He knew what my plan was all the time. After I had handed over the money and delivering my greeting, I came to the conclusion that my so-called reconnaissance mission to inject some foreign-led humanity seemed more like a failed stunt. I needed anonymity and food to settle my fast-beating heart and mask my shame.

I retreated to a nearby stall to eat, or ‘assemble’ a banh xeo, a savory pancake filled with shrimp and alfalfa sprouts, wrapped in lettuce leaves and dipped in spicy fish sauce. As opposed to my hyped up act of kindness, I impressed with my culinary, handling chopsticks with relative ease. A middle-aged Vietnamese woman sitting opposite me asked where I refined my chopstick skills, whilst shielding me from numerous beggars asking for money, telling them in a straightforward manner to leave me alone, or at least, that was what her tone implied. Perhaps these beggars had heard something about or watched my generosity with the monk and wanted a piece of the action, too.

“You must be careful here,” the lady said to me. “Some of these people will do anything to take money from you.”

“What will they do?” I asked, half expecting a lecture. Maybe this lady had seen me get sucked in.

“Anything, sometime(s) they pretend to be a monk” she said. ”Poverty encourages desperation.”

Damn my stupid generosity and wanting to make a difference in Tet. Whatever street smart credibility I had built up over the years had just been destroyed. I kept asking myself why anybody would dress up as a monk to take money from another person. But then he did not physically steal it from me. I offered the 20,000 dong note. It reminded me of the saying “There’s a sucker born every minute.” Obviously the alarm had gone off and I missed it when it counted. Seclusion seemed like a more viable option.

In the sapping humidity, the 10 minute walk to a nearby café tested my patience. Normally, I would have headed to the nearest bar for a drink, but my pledge was to remain alcohol-free in Vietnam, a real challenge considering the price of a beer was 10,000 Dong, or 50 cents. Hence began my addiction to cà phê sữa đá (iced coffee). I chose a nearby café, attracted to its outdoor wooden chair setting and a shaded area which offered protection from the heat. An iced coffee and a nice place in the shade to reflect on the day passed thus far.  But that peace was shattered by another monk seeking my attention. He, too, wore the same colored robes as the monk in Ben Thanh Market. Still smarting from what happened earlier, I cautiously greeted him in the manner of pressing my palms together. He returned the gesture and smiled. This monk, however, was more forthright. He sat next to me and called over the owner in Vietnamese, who quickly returned with two menus.

The owner, a rough-looking middle-aged woman, said to me, “I get you cà phê sữa đá. The monk wants to talk with you.” She then barked an order at one of her waitresses who nodded and rushed off. The monk adjusted his spectacles, smiled and to my surprise, pulled out a stash of posters, calendars, and amulets. This man is no monk, I thought to myself; he is a salesman.

We sat there exchanging awkward smiles. Not much talking done here. I sensed that the café owner would act as the interpreter, negotiator, and stand-over woman. She spoke with the monk, leaving me to smile foolishly and try to guess what the two were saying. This took place for nearly five minutes, by which time a waitress had returned with my iced coffee and placed it in front of me together with a serviette.

The owner said in a sharp tone, “Today is your lucky day.”

‘I have had one of those already,’ I mumbled to myself, before saying “Why is that?”

“Because the monk wants you to buy something from him. Good luck for you,” the owner said.

As soon as I started saying, ‘Here we go again,’ the monk started showing me his wares. I refused to focus on each poster, calendar, and amulet laid out in front of me, in case it indicated that I wanted to buy something. He should have been at Ben Thanh Market, not a café. I can sense that he was frustrated that I refused his inclinations to purchase anything. In a desperate attempt for me to pay for something, the monk grabbed the menu, pointed to Ca Phe Sua Da and made a drinking gesture. He wanted an iced coffee, just like me. I did not know how to react. I thought that he was not allowed to have dairy and caffeine. I was very tempted to say something, but backed out, realizing that I would earn the owner’s wrath and the monk’s displeasure. Then the monk made his move. He leaned over, snatched my iced coffee and then started sipping from the straw. All I could do was watch in amazement as he slurped away, conversing with the café owner in between drinks. The sweet taste of iced coffee on a hot day should have been comforting my parched lips, not this religious salesman.

By this time I had seen enough. “The monk stole my coffee,” I shouted, breaking the first rule of life in Vietnam – shouting does not guarantee you victory in anything.

“You did not have to greet him the way you did,” the café owner said to me. She was unfazed by my child-like tantrum. “It meant that you give everything to him. It’s your own fault.”

Of course it was a lie. If my coffee was fair game, would Freddie Freeloaded the Monk reach for my personal belongings? I hurriedly moved across the seat, holding on tight to my wallet and passport, which were in a day pack protected with a lock. I even contemplated taking the matter to the tourist police, but did not expect anyone to believe that a man in robes posing as a monk stole my coffee. I felt cheated and handed my money over to the café owner, with a greeting to wish my iced coffee all the best.

“What you say?” the owner asked, not sensing my disappointment.

“Tell the monk to enjoy my cà phê sữa đá,” I said, smiling before walking away.  The only way I could cleanse myself was to attend a Buddhist temple, and hopefully meet with a real monk. But after two false starts, could I tell the real deal from the imposters? There was only one thing for it.

I hailed a motorcycle rider, who handed me a helmet.