The Language of Power: Obama’s ‘Humanitarian Hawk’ & Israel’s New Gladiator at the UN 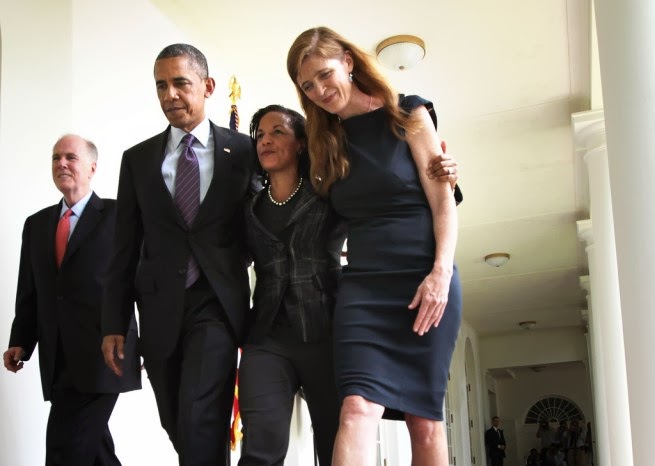 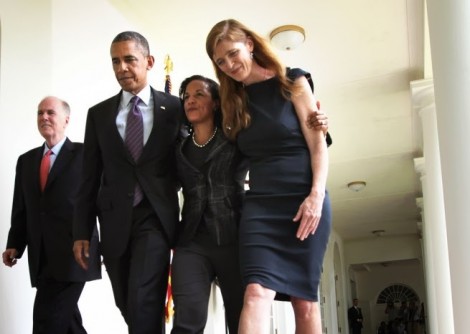 In her first appearance before the Senate Foreign Affairs Committee, Samantha Power, Obama’s pick for next U.S. Ambassador to the United Nations, made clear that she will spend her time in the role much as her predecessor Susan Rice did: acting as Israel’s consummate defender, fear-mongering about Iran, and opposing any move to champion Palestinian human rights or self-determination.

Rice, who has been appointed as Obama’s National Security Adviser, has said repeatedly that the American delegation to the UN “often works in ‘lockstep’ with the Israeli delegation” and spends “an enormous amount of time defending Israel’s right to defend itself and defending Israel’s legitimacy.”

Power has already proven herself a loyal replacement, disavowing any semblance of past critical thinking when it comes to Israeli human rights abuses and abrogation of international law and opposing fear-mongering about Iran’s nuclear program. It is no surprise Washington hawks and even the Israeli government are falling over themselves to sing her praises.

In her confirmation hearing yesterday, Power revealed her adherence to AIPAC talking points, essentially working her way down the tried and true list of boilerplate phrases.  “The United States has no greater friend in the world than the State of Israel,” she said, adding, “Israel is a country with whom we share security interests and, even more fundamentally, with whom we share core values – the values of democracy, human rights, and the rule of law.”

“America has a special relationship with Israel,” she stated, to the surprise of no one and the consternation of George Washington‘s ghost. “I will stand up for Israel and work tirelessly to defend it,” she promised.

Perhaps her most disturbing comments, however, were about Iran.  Shamelessly exploiting the horror of the Holocaust to fear-monger about the Islamic Republic, she declared:

“…within this organization built in the wake of the Holocaust – built in part in order to apply the lessons of the Holocaust – we also see unacceptable bias and attacks against the State of Israel. We see the absurdity of Iran chairing the UN Conference on Disarmament, despite the fact that its continued pursuit of nuclear weapons is a grave threat to international peace and security.”

With this statement, Power, in her eagerness to check off all the buzzwords boxes prescribed by AIPAC, directly contradicts the consistent assessment of the United States’ own intelligence community, which has repeatedly concluded that Iran is, in fact, not pursuing a nuclear weapons as it has no nuclear weapons program.

Early last year, an unnamed U.S. intelligence official told the Washington Post that Iran has not decided to pursue nuclear weapons, explaining, “Our belief is that they are reserving judgment on whether to continue with key steps they haven’t taken regarding nuclear weapons.”  At the time, Secretary of Defense Leon Panetta affirmed this position, admitting, “Are they trying to develop a nuclear weapon? No.”

Either Samantha Power is an idiot or she’s lying.

In fact, there was a time when Power wasn’t so confident in making such a declarative statement. In a 2008 interview with Miller-McCune, Power noted that she was “not an expert on Iran,” but condemned the “American sabre-rattling” of the George W. Bush administration. “The threats – implicit and explicit – of U.S. military action have united very diverse secular, Islamist and nationalist strands,” she said, adding that American “belligerence” had “backfired.”

When asked specifically about whether she thought “Iran is trying to create nuclear weapons,” Power replied, “It would surprise me if they weren’t, but I don’t know.”

Still, she disparaged the findings of the National Intelligence Estimate and simply assumed Iran “would see as in its interests to amass as much firepower as possible,” due to the foreign threats it faces. Nevertheless, she stated, “It does not seem as though the Iranian regime is close to possessing nuclear weapons” and that “when U.S. leaders claim Iran poses an imminent threat, they are not currently heard as credible.”

Furthermore, Power’s incredulity regarding what she deems the “absurdity of Iran chairing the UN Conference on Disarmament,” betrays her own ignorance on Iran’s constantly repeated stance regarding nuclear nonproliferation and disarmament.

Last year, Iranian Foreign Minister Ali Akbar Salehi stated that Iran fully supports the establishment of a NWFZ, but that Israel, and its American backers, presented the “only obstacle to the creation of such a zone…due to its persistent refusal to join the NPT and to place its nuclear facilities under the IAEA safeguards system.”

Earlier this month, at the “International Conference on Nuclear Security: Enhancing Global Efforts” held in Vienna, Iran’s Ambassador to the IAEA, Ali Asghar Soltanieh reiterated his nation’s commitment to universal nuclear disarmament. “The best guarantee for nuclear security is definitely a world free from nuclear weapons,” he said, “as a result of which nuclear disarmament process could reinforce nuclear security efforts.”

Abe Foxman, the Anti-Defamation League’s hasbarist-in-chief, once called Susan Rice a “gladiator” fighting in the United Nations on behalf of Israel.  There is no question Samantha Power will, for the sake of our “special relationship” and “shared values” with an aggressive, nuclear-armed, settler-colonial apartheid state, similarly take up the sword and continue to unleash hell on the entire Middle East.