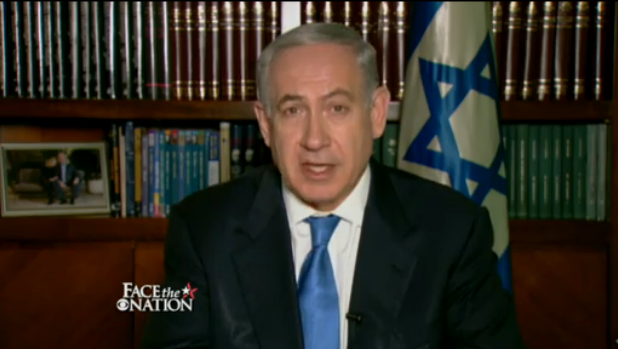 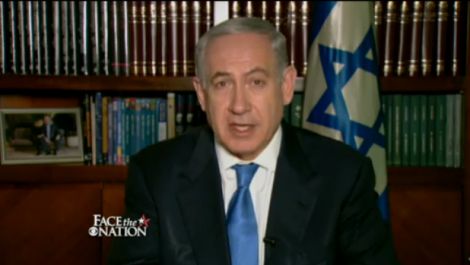 “Red line, white line, black line and the like is for children. This is the level of this guy’s character.” — Mahmoud Ahmadinejad, October 2, 2012

In a renewed propaganda blitz, Netanyahu told CBS‘ Bob Schieffer on “Face the Nation” that Iran is getting “closer and closer to the bomb,” and resurrected a number of embarrassing phrases including “red line,” “credible military threat” and something about ticking clocks.

“They’re edging up to the red line,” Netanyahu said. “They haven’t crossed it yet. They’re also building faster centrifuges that would enable them to jump the line, so to speak, at a much faster rate – that is, within a few weeks.” He also said Iran is “building ICBMs [intercontinental ballistic missiles] to reach the American mainland in a few years.”

Dismissing the recent Iranian election as irrelevant to what he insists are devious Iranian intentions, Netanyahu called Hassan Rouhani, who will be inaugurated as Iran’s new president on August 3, “a wolf in sheep’s clothing,” whose maniacal strategy will be, “Smile and build a bomb.”

The media carried the news with headlines like “Israeli PM threatens to strike Iran” and “Israel Increases Pressure on U.S. to Act on Iran,” quoting Netanyahu as claiming that, when it comes to blah blah blah, “I won’t wait until it’s too late.” We’ve been here before.

It was boring then and it’s boring now.

“If sanctions don’t work, they have to know that you’ll be prepared to take military action — that’s the only thing that will get their attention,” Netanyahu said, suggesting that Iranians are subhumans who only understand grunts and shoves, rather than rational actors preserving and protecting their inalienable national rights and refusing to back down to offensive and illegal demands made by serially-aggressive nuclear-armed bullies.

Netanyahu urged the United States government to “make clear that the nuclearoption” – whoops, Freudian slip of the war criminal’s tongue – “the military option which is on the table is truly on the table,” but lamented that there seemed to be “no sense of urgency” when it comes to stopping Iran from doing something every intelligence agency on the planet – including Israel’s – says it’s not doing.

The Israeli Prime Minister and his military and political acolytes, have repeatedly called for the United States to issue a “credible military threat“against Iran. Netanyahu did so again at a Cabinet meeting prior to his appearance on “Face the Nation.”

Still, an obsession is an obsession and, at least, Netanyahu isn’t ashamed of being obsessed. “Iran is the most important, the most urgent matter of all,” he whined, before throwing up a silly hodgepodge of scary-sounding words in an attempt to be taken seriously. All the problems in the world – including Israel’s ongoing colonization of Palestine – won’t amount to a hill of beans, he cried, if the “messianic, apocalyptic, extreme regime” in Tehran acquires “atomic bombs.” Such a ghastly scenario would present “a terrible, catastrophic change for the world and for the United States,” he said, because the United States apparently isn’t part of the world. (Actually, considering the isolation the United States and Israel – along with lackey states like Palau and Micronesia – face in the United Nations, Netanyahu may be on to something here.)

Of course, the often-repeated assessment of the U.S. intelligence community that Iran is not actually building a bomb and has no nuclear weapons program went unmentioned, as did the fact that Iran has supposedly been “a year or so” away from developing nuclear weapon for roughly a decade now.

Unsurprisingly, “Face the Nation” host Bob Schieffer challenged none of Netanyahu’s assertions; all the warmongering and propaganda was given a free pass.  This is especially bizarre considering, in January 2012, then-Defense Secretary Leon Panetta told Schieffer on the same program, “Are they trying to develop a nuclear weapon? No.”

Netanyahu has been leading the charge against Iran since the mid-1990s, warning of weapons programs that don’t exist and calling for sanctions and explicit military threats. His talking points since then literally have not changed – and are identical to those he used to encourage the United States to invade Iraq a decade ago.

Here’s a reminder of why the Israeli Prime Minister’s CBS interview may actually have been a rerun:

The suggestion that Iran would soon be in possession of, or be in a position to quickly manufacture, nuclear weapons has been in constant circulation for nearly three decades. In 1984, Iran was reportedly moving “very quickly” towards a nuclear weapon and could have one as early as 1986. By the early 1990’s, the CIA predicted Iran was “making progress on a nuclear arms program and could develop a nuclear weapon by 2000,” later changing their estimate to 2003.

Israeli estimates have always been of an especially hysterical quality.  In March 1992, The Jerusalem Report, noting that “Israel keeps a wary watch on Teheran’s march to the Bomb,” predicted that, “[b]y the year 2000, Iran will almost certainly have the Bomb.”

A few months later, Israeli Major General Herzl Budinger insisted that, unless “Iran’s intensive effort to develop atomic weapons is not ‘disrupted,'” it would “become a nuclear power by the end of the decade.”  Then-Israeli Foreign Minister Shimon Peres shared similar assessment later that year.

On November 8, 1992, the New York Times reported Israel was confident Iran would “become a nuclear power in a few years unless stopped.” An Israeli “senior army officer” feared “the Iranians may have a full nuclear capability by the end of the decade.”

The alarm was still ringing a couple of years later when, on January 11, 1995, Benjamin Netanyahu told a nearly empty Knesset hearing that “within three to five years, we can assume that Iran will become autonomous in its ability to develop and produce a nuclear bomb, without having to import either the technology or the material.”

His solution to this crisis? “[The nuclear threat] must be uprooted by an international front headed by the U.S. It necessitates economic sanctions on Iran,” he declared.

By 1996, Israeli assessments put an Iranian nuclear bomb four years away. One year later, they confidently predicted it would happen by 2005. By mid-2001, Israel was still holding fast to its 2005 deadline and reaffirmed such a warning in 2003.

By 2004, however, an Israeli intelligence report determined that “within three years Iran would have the means to produce an atomic bomb by itself.” In 2005, Israel’s Defense Minister Shaul Mofaz said Iran was “less than one year away.” At the same time, Israeli Military Intelligence’s prediction was 2007, then 2008, later revised to 2012, then returned to 2008. In 2007, Israeli Military Intelligence said Iran would become nuclear weapons capable by mid-2009. A year later, the 2009 threshold referred to “an operable nuclear weapon,” rather than just capability.

When 2009 rolled around, then-Prime Ministerial candidate Benjamin Netanyahu told an American Congressional delegation that Israeli “experts” determined Iranian nuclear weapons capability “was probably only one or two years away,” while Israeli Defense Minister Ehud Barak put the window of opportunity to stop Iran from acquiring nuclear weapons at a mere six to 18 months. At the time, Mossad chief Meir Dagan insisted, “the Iranians will have by 2014 a bomb ready to be used, which would represent a concrete threat for Israel.”