US and Israel Lobby Reel from Hezbollah al-Qusayr Victory 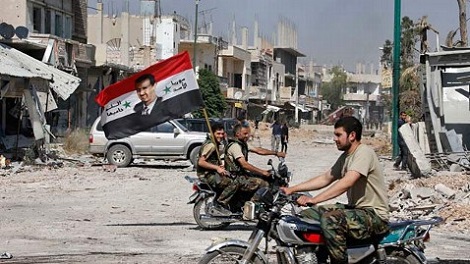 BEIRUT — Although al-Qusayr may not be the decisive battle for Syria, it is irrefutably an important turning point in the crisis and has given the regime much sought military momentum. Plenty of adjectives and some clichés are being bandied about from Washington to Beirut to describe the al-Qusayr battle’s results and significance.  Among them are “game-changer,” “mother of all battles,” “altered balance of power,” critical “turning point in the civil war,” and so on.

It does appear that the victory of the Syrian government forces at al-Qusayr is a strategic achievement, if also a humanitarian disaster for the civilian population still waiting for the ICRC and SARCS (Syrian Arab Red Crescent Society) emergency help. Al Qusayr is located in Homs province, an area central to the success of the Syrian government’s military strategy. It is situated just west of the shortest route from Damascus to the coast, at a juncture where regime forces have struggled to maintain control. Rebel control of al-Qusayr had disrupted the regime’s supply lines from the port of Tartus and was open for the cross-border movement of Gulf arms to rebels via Lebanon’s Bekaa Valley.

Government control of al-Qusayr also provides a ground base for the Assad government to move to retake control of the north and east of Syria. This crossroads city just 6 miles from the Lebanese border has many strategic ramifications: breaking the opposition’s 18 month control of much of Homs province, facilitating government forces momentum generally across Syria, and psychologically raising the morale of exhausted Syrian forces while energizing the Assad government and its allies to finish the conflict and focus on long-promised reforms and try to relieve Syria from the nearly 27 months of hell for its people.

Perhaps less appreciated here in Beirut are al-Qusayr’s effects on the Zionist occupiers of Palestine and their currently traumatized US lobby.

From conversations and emails with former colleagues at the Democratic National Committee (on which this observer served during the Carter administration) as well as with Congressional insiders, a picture emerges of nearly debilitating angst among those committed to propping up the apartheid state in the face of truly historic changes in this region that have only just begun to re-shape the region.

The reactions from various elements of the pro-Israel lobby range from the Arabphobic Daniel Pipes’ fantasy essay in the Washington Times this week entitled “Happy Israel” to Netanyahu’s increased threats issued from Tel Aviv about what Israel might do if his three cartoon “red lines” are breached, to more pressure on the White House by Israel’s agents in Congress who are demanding that Obama act immediately to undo “the major damage done at Qusayr”.

Several aspects of “the Qusayr rules and results” are being discussed at the HQ of the racist anti-Defamation League (ADL) which has summoned an emergency gathering of the Conference of Presidents of Major American Jewish Organizations to craft a solution to the problem. The tentative agenda reportedly includes for discussion and action the following:

The twin defeats at al-Qusayr and at Burgas, Bulgaria (. Bulgaria is claiming there is not probative evidence to conclude that Hezbollah was involved in the attack on Israelis last year)—the latter should not be underestimated, according to one AIPAC activist who works on the House Foreign Affairs Committee, given that it substantially knocks out the props from the lobby’s project to get the European Union to list Hezbollah as a terrorist organization, thus interfering with the Islamist party’s fundraising.

The lobby is also reacting angrily to Austria’s Chancellor Werner Faymann and Foreign Minister Michael Spindelegger’s statement about that country’s decision to withdraw its 380 peacekeeping troops, more than one-third of the 1,000 United Nations Disengagement Observer Force (UNDOF) contingent, from the Golan Heights.

The lobby is claiming that Austrian move constitutes an existential threat to Israel because it opens the Quneitra crossing, the door to the Golan, for the Syrian civil war to spill over the border into Israel. At the same time it is being argued that al Qusayr lifts pressure off Hezbollah, Iran, and Syria as well as the Palestinian resistance, and will gain more fighters who sense victory for the current regime and major gains for all in the political dynamics of the region.

The Israel embassy in Washington has chimed in with a statement that the Austrian withdrawal threatened the role of the UN Security Council in any future negotiations between Israel and the Palestinians, while at the same time encouraging Hezbollah to move into the Golan.

Israel stalwart, Eric Cantor (R-Va) told a “brown bag” lunch gathering in the House Rayburn Building cafeteria late this week that the fall of al Qusayr will facilitate the Assad regime’s advance on areas north of Homs province and will likely return to Damascus control of important rebel-held areas in the north and the east. Cantor claims that the Assad regime victory effectively cuts off an important supply route to the rebels, which will leave the armed opposition even more weakened and scattered. Israel is demanding an immediate US supported counter-offensive consistent with the demands made by US Senators John McClain and Lindsay Graham.

The apartheid state also is demanding that the White House scrap Geneva II, claiming that Assad is now too strong for the US/Israel to benefit from such a dialogue. “If the international community is serious about seeking to enforce a negotiated settlement, they will first have to do something to decisively change the balance of power on the ground ahead of any serious negotiations,” he added.

When asked about giving US aid to Lebanon, Cantor reportedly sneered, as he expressed his shock that Hezbollah had so many troops and how, without US boots on the ground, it would be very difficult for Israel to defeat, “Forget about Lebanon, it never as a real country anyway, just call the whole place over there Hezbollah and let’s send in the marines to finish the job.”

One congressional staffer who attended the meeting winced at the thought of US marines again being sent to Lebanon given their previous experience there nearly 30 years ago.

The Lobby is also concerned about the fact that the Arab League and the Gulf countries might be softening in their ardor to confront Syria and Hezbollah, who they view as now being full partners in this crisis. A media source at the Saudi Embassy in Washington has complained that the six member Gulf Cooperation Council (GCC) has spent more than a billion dollars on the opposition and have, to date, little to show for their “investment.” Nor does Israel have much to show to date for its deepening role in the crisis given that its air strikes are widely viewed in Washington and internationally as being counterproductive and helping to unite Muslims and Arabs in the face of their common global enemy.

The ADL reportedly wants the White House to act fast “to do something” in light of a new Wall Street Journal/NBC News poll released on Wednesday, the day of the Syrian government’s victory at al Qusayr, showing that only 15% of Americans polled advocated taking military action, and only 11% supported providing the rebels with arms. A quarter of respondents, 24%, favored taking no action, similar to the current White House position.

Abe Foxman, ADL’s President for Life, and inveterate anti-Semite tracker, myopically sees anti-Semitism, and surely not Israel’s decades of crimes against humanity as the cause for other “anti-Semitic” polls released this week. Those included the recent one commissioned by the BBC which confirmed that Israel is not only ranked second from the bottom of 197 favorably viewed countries, including as a danger to world peace, and just about the world’s most negatively viewed country, but its support globally continues to evaporate. Views of Israel in Canada and in Australia remain very negative with 57 and 69 per cent of their citizens holding unfavorable views. In the EU countries surveyed, views of Israeli influence are all strongly negative with the UK topping the list with 72 per cent of the population viewing Israel negatively.

As Ali Abunimah noted this week, “The persistent association of Israel with the world’s most negatively viewed countries will come as a disappointment to Israeli government and other hasbara officials who have invested millions of dollars in recent years to greenwash and pinkwash Israel as an enlightened, democratic and technological ‘Western’ country.” (“Israel one of world’s most unpopular countries and it’s getting worse: BBC survey,” Ali Abunimah, Electronic Intifada, June 6, 2013.)

With Wednesday’s National Lebanese Resistance (Hezbollah) victory at al-Qusayr, coming as it does 97 years to the month after the Triple Entente’s (UK, France and Russia) May 1916 secret Asia Minor Agreement, generally known as Sykes-Picot, the scheme to control the Middle East following the defeat of the Ottoman Empire has furthered crumbled. Its “Rosemary’s Baby” progeny, the colonial Zionist occupation of Palestine, is increasingly being condemned by history to an identical fate.

According to a growing number of US and European officials and Middle East analysts as well as public opinion polls, it is solely a matter of time until, like al-Qusayr, Palestine is returned to her rightful, indigenous inhabitants.