Iran and the Outside World 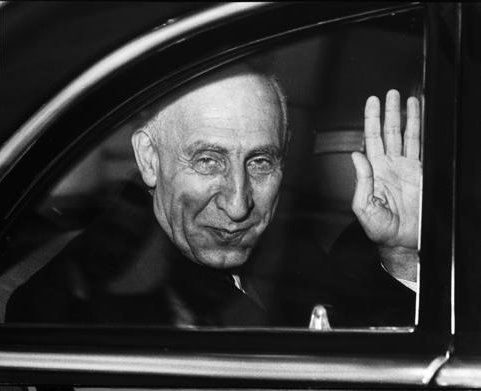 Mohammed Mossadegh, the democratically elected Prime Minister of Iran who was overthrown in a CIA-backed coup in 1953.

Mohammed Mossadegh, the democratically elected Prime Minister of Iran who was overthrown in a CIA-backed coup in 1953.

The presidential election in Iran, due to take place on June 14, has ignited a fresh round of debate in the West on the country’s internal politics when Syria and Iran’s nuclear program dominate the Middle East agenda. They are all part of the same big picture and motives of competing powers in the region. The Guardian Council’s ruling to exclude the 78-year-old former president Hashemi Rafsanjani, apparently because of his age, has led to questions being raised about the future direction of Iran, once Mahmoud Ahmadinejad’s successor is elected.

Writing in the Guardian newspaper, Peter Oborne and David Morrison opined that Rafsanjani’s absence from the presidential race was taken as a sign that Iran was “about to turn its back on nuclear negotiations.” The verdict already is that it is too gloomy. Eight presidential candidates have been debating the issues on television as the campaign proceeds. In the run up to the June 14 vote and thereafter, more will be said in Western capitals, not much positive, about Iran and its politics in isolation. In a sense, it is a continuation of familiar history of what many Iranians see as interference and humiliation–history that strengthens those in power and weakens genuine dissent.

Iran has been an object of desire in the strategic rivalry called the Great Game between the British and Russian imperial powers in Central Asia from the early nineteenth century. The twentieth century had been a traumatic journey for the Iranian people, who endured foreign intervention, manipulation, and revolutions. These transformational events were, to a large degree, imposed on the country. Mules and camels were the normal means of transport at the beginning of the twentieth century. A hundred years on, Iran is officially a theocracy; Tehran city has heavy motor traffic; Iranian scientists are engaged in stem cell research with a vast potential in the treatment of serious illnesses—the kind of research which America’s right-wing lobbies oppose; and Iran has a nuclear research program, a major cause of brinkmanship with Washington.

In a hundred years Iran has transitioned from a country without an effective bureaucracy, communication network, or standing army to a major power in Central and West Asia—a country of vast energy resources. At the beginning of the twentieth century, local tribal leaders, notables, clergy, and powerful merchants ran the country in the name of the shah of the reigning Qajar family in Tehran. Internal conflict in a weak state brought insolvency and foreign intervention by the Russian and British imperial powers and the United States. Each intervention was followed by further upheaval that shaped Iran into an Islamic republic vehemently opposed to the West by the end of the century.

Like many ruling dynasties of the time, the Qajar family suffered decline in the early part of the twentieth century. Qajar rulers had been on the throne for more than a hundred years, not so much because of bureaucratic institutions and coercion, but thanks to systematic manipulation of social divisions. The jurisdiction of the Qajar state was really limited to Tehran and surrounding areas. But wearing grand titles, including that of Supreme Arbiter, the shah was content with clan and tribal chiefs and powerful notables exercising real authority in the outer reaches of his kingdom. Some of them married into the royal family to cement their relationship with the ruling family.

Facing an economic crisis brought by bankruptcy and high inflation in 1904–5, the Qajar ruler, Muzaffar al-Din Shah Qajar, threatened a steep rise in land taxes and turned to Britain and Russia for loans on top of the £4 million Iran had already borrowed. The imperial powers forced him to hand over control of Iranian customs to Belgian administrators, who promised that repaying the outstanding loans to Britain and Russia would be a priority.

The crisis triggered what became Iran’s Constitutional Revolution. Speakers at sermons in the capital mourned the loss of their nation’s sovereignty. One protested that the country had been “reduced to such a condition that our neighbors of the north and south already believe us to be their property and divide our country between themselves.” Widespread protests shook the monarchy, and attempts to suppress them were unsuccessful. On August 5, 1906, Muzaffar al-Din Shah finally signed a royal proclamation to hold national elections for a constituent assembly.

In October an elected assembly convened and drew up a constitution that provided for strict limitations on royal power; an elected parliament, or Majlis, with wide powers to represent the people; and a government with a cabinet subject to confirmation by the Majlis. The shah signed the constitution on December 30, 1906. He died five days later. The Supplementary Fundamental Laws approved in 1907 provided limited freedom of press, speech, and association and security of life and property.

The attempt to replace Muzaffar al-Din Shah’s despotic rule with a written code of laws debated and approved by an elected assembly was short-lived. The 1907 Anglo-Russian pact signed by the two imperial powers, who were fearful of Germany, divided up much of Iran. Isfahan in the north went to Russia, and areas in the southwest, including Baluchistan, Kerman, and Sistan, went to Britain.

Furthermore, the empires in the north and the south agreed to keep the Belgian customs officials to collect taxes and use the revenues to recover the loans. The rest of Iran was declared a “neutral zone,” leaving the constitutionalists to deal with the shah. As a keen observer was to write later, the pact “taught Iranians a hard lesson in realpolitik—that however predatory the two neighbors were, they were even more dangerous when they put aside their rivalries.” Conflict broke out between the shah and the constitutionalists, spreading far afield, and instability continued until the middle of the century.

Fifteen years of internal conflict and intervention by Britain and Russia, soon to become the Soviet Union after the fall of the czarist regime in 1917, left Iran in a fragmented state in 1920. The Qajar shah had been forced to grant Britain access to Iranian oil fields, including in the north, which was under Russian influence. In return, Britain would offer weapons, ammunition, and military advisers to the Iranian ruler. The Anglo-Iranian agreement, issued by the British foreign secretary Earl Curzon, turned Iran into a virtual British protectorate and was widely condemned, most notably by France and the United States.

Soon the Red Army threatened to march on Tehran. Amid all the turmoil, General Reza Khan, commander of a Russian-trained Cossack brigade in Qazvin to the west, marched into Tehran. Reza Khan declared martial law, took control of the capital, and told the Qajar ruler, Ahmad Shah Qajar, that he had come to save him from the Bolsheviks. In reality, though, the Qajar dynasty was coming to an end. Reza Khan was the new shah of Iran by 1925, and he declared his own Pahlavi dynasty a year later. In the end, the Qajar dynasty fell with a whimper.

The Iranian state’s systematic humiliation and consequent weakness had made it progressively susceptible to external forces. A lack of infrastructure and instruments of enforcement at the state’s disposal were responsible for two distinct phenomena in the country. The Qajar dynasty collapsed because it had little to give its subjects and few means of control in Iranian territory. A state without means is a state without authority. Its fate is in the hands of those who move in to fill the void created by the state’s inability. The Qajar dynasty lasted more than a century (1794–1925), but in the end it was a puppet of whichever external power was ascendant.

Social upheaval of such order frequently leads to radicalization. The 1906 Constitutional Revolution had raised hopes that the Iranian parliament would assert itself and be a counter to manipulations of the Qajar regime and imperial powers. In the end, the Qajar dynasty and the constitutionalists both failed, and a new order emerged under the leadership of Reza Shah, who in February 1921 staged a coup that made him Iran’s effective ruler. Four years later he proclaimed the Pahlavi dynasty. The last king, Ahmad Shah Qajar, went into exile in Europe.

His successor, an autocrat, was clear about what was wrong with the country. He abrogated the Anglo-Iranian agreement and signed a pact with the Soviet Union. The British retreated. The Soviets were persuaded to withdraw to Gilan Province in northwestern Iran and cancel most of the czarist debt and claims. However, the new Communist rulers in the Kremlin gave Iran a guarantee that they would intervene if a third power ever invaded the country and posed a threat to the Soviet Union.

Reza Shah consolidated his rule through state building in two areas: the bureaucracy and the armed forces. By bolstering the bureaucracy he meant to create a hierarchy of authority from the center down to the local level. Government officials would implement laws, gather information, and perform the vital function of tax collection. Reza Shah’s attention to the armed forces reinforced the nation’s primitive defenses. It was the beginning of a trend that would turn Iran into a major power in the Persian Gulf in the next half century.

At this stage, Reza Shah appointed an American, Arthur Millspaugh, to the post of treasurer-general.  Educated at the University of Illinois and Johns Hopkins, where he also lectured, Millspaugh had worked at the drafting office at the State Department and then as a trade adviser. Reza Shah’s decision to hand over the responsibility of reorganizing the economy to an American technocrat looked like a master stroke. It reduced British and Soviet interference in Iran’s affairs. Moreover, Millspaugh and Reza Shah worked well together for some time, and the economy improved dramatically.

Using the shah’s personal authority and the coercive power of Iran’s expanding military, Millspaugh started collecting taxes from those who had been avoiding paying. He made the Majlis raise the tax rates every time more revenues were needed for expansion of the military or bureaucracy. He appointed full-time civil servants to run departments. All this strengthened the authority of the central government under Reza Shah—a remarkable turnaround in a country squeezed between two major imperial powers of the day. Millspaugh stayed in Iran for five years, until 1927. Many Iranians saw him as the man who could liberate them from British and Russian domination and the United States as a friend of their country.

The advent of the United States as the third significant power in the region did not prevent Britain and the Soviet Union intervening again in Iran, most notably in the early 1940s and a decade thereafter. In 1941 Reza Shah Pahlavi was seen as sympathetic to Germany’s Nazi regime in World War II. The British and the Soviets forced him to abdicate and his son, Mohammad Reza Shah Pahlavi, became shah. The Allied forces promptly occupied Iran and transported armaments to the USSR to repel the Nazi advances.

More than ten years later, the American CIA and the British MI6 staged the 1953 coup in which the democratically elected prime minister, Mohammad Mosaddeq, was overthrown. General Fazlollah Zahedi, who had collaborated with the Western intelligence services, became prime minster. Mohammad Reza Shah Pahlavi, who had fled into exile, was reinstated on the throne. The 1953 overthrow of Iran’s democratically elected nationalist government in an American-inspired coup plot sank deep in the Iranian psyche. Those events determined the nation’s state of mind, finally led to the 1979 Islamic Revolution, and explain the Iranians’ attitude to the outside world.