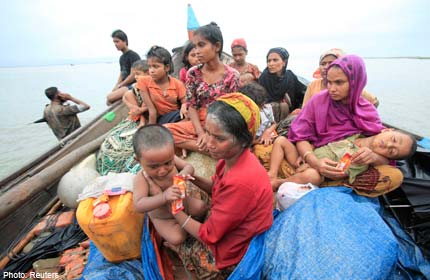 On April 21, the BBC obtained disturbing video footage shot in Burma. It confirmed extreme reports of what has been taking place in that country, even as it is being touted by the US and European governments as a success story pertaining to political reforms and democracy.

The BBC footage was difficult to watch even when faces of Muslim Rohingya victims were blurred. To say the least, the level of violence exhibited by their Arakan Buddhist attackers was frightening. “The Burmese police (stood) by as shops, homes and mosques are looted and burnt, and failing to intervene as Buddhist mobs, including monks, kill fleeing Muslims,” the BBC reported. A Rohingya man was set ablaze while still alive. The police watched.

To some extent, international media is finally noticing the plight of the Rohingyas who are experiencing what can only be described as genocide. And there are reasons for this. On one hand, the atrocities being carried out by the Burmese state, local police and mobs belonging to nationalist Buddhist groups in the northwestern Arakan State, are unambiguous attempts at removing all Rohingyas from Burma. The Rohingya numbers currently hover between 800,000 and one million. On the other hand, Burma (also known as Myanmar) has, as of late, been placed in the limelight for the wrong reasons, thanks in part to western governments breaking the political and economic siege of the country’s decades-long military dictatorship.

While the ‘new Burma’ is being rebranded in a new positive discourse in order to open Rangoon up for foreign investments and steer it way from growing Chinese influence, western governments are deliberately ignoring the fact that a human rights crisis of unprecedented proportions is taking place. This all being done with the active involvement and encouragement of the government.

In the eyes of many in Burma, the Rohingyas are considered subhumans, and are treated as such. Most Rohingya Muslims are native to the state of “Rohang”, also known as Rakhine or Arakan. The majority of them live in very poor townships, mainly Buthidaung and Maungdaw, in the northwestern part of Arakan, or live in refugee camps. Their population subsists between the nightmare of having no legal status (as they are still denied citizenship), little or no rights, and the ethnic purges carried out by their neighbors. The worst of such violence in recent years took place between June and October 2012. However, the onslaught targeting Rohingyas is resurfacing and spreading. This time around the intensity and the parameters of violence grew to include other Muslim minority groups in the country.

The BBC footage is not only revealing in the sense that it confirmed the authorities’ complicity in the violence, but it also reflected the government’s general attitude towards this minority group, described by the UN as the ‘world’s most persecuted people’. Responding to the outcry against his country’s brutal treatment of its minorities, Burmese President Then Sein made an ‘offer’ to the UN last year where he was willing to send the Rohingyas “to any other country willing to accept them.”

This peculiar behavior by the Burmese government is problematic in more than one way. Rangoon doesn’t seem even slightly mindful of international humanitarian laws or simply wishes to ignore it altogether. Its legal frame of reference is hardly a reflection of a repented dictatorship. But what is even more dangerous is that Rangoon has been sending unmistakable messages to nationalist groups who are leading the ethnic purges, that their extremely violent behavior is in fact consistent with the central policies of their governments.

Groups like Human Rights Watch (HRW) have become markedly more outspoken regarding the violence against the Rohingya. To quell growing criticism, perhaps fearing a backlash in terms of lucrative business contracts, the Burmese government decided to investigate the ‘sectarian violence’ through a supposed independent commission. Its recommendations were as equally disturbing as the violence itself.

The government Inquiry Commission on the Sectarian Violence in Rakhine State, assembled last August, was composed of 27-members, all Arkanese Buddhists, none of them from the Rohingya minority. The long-awaited report on the violence finally emerged on April 29, 2013. Its major findings included concerns over “rapid population growth” among Rohingya and Kaman Muslims. Its recommendations compelled a swift response from local authorities that moved in to limit the birth rate of Muslim Rohingya in two large townships.

On May 26, Arakan State spokesperson Win Myaing told journalists that the findings of the commission were consistent with the 2005 law that limits birth rate among Roghingya Muslims to two children per family. That discriminatory law goes back to 1994 where severe marriage restrictions were imposed on the Rohingya community, requiring long and complicated procedures. The BBC said, “it is not clear how (the ‘two-child policy’) will be enforced.”

Regardless of what sort of mechanisms Burmese authorities plan to put in place to implement the ‘law’, limiting population growth of the Rohingya people, is an abhorrent principle in and of itself. It even compelled celebrated ‘democracy icon’ Aung San Suu Kyi to break her silence regarding the violence against Rohingyas; however, she carefully selected her language.

“It is not good to have such discrimination. And it is not in line with human rights either,” Suu Kyi told reporters, although “she could not confirm whether the policy was being implemented,” reported the BBC online on May 27.

Considering the level of violence directed at Rohingyas and the fact that more than 125,000 Rohingya have already been pushed into internally displaced camps (tens of thousands more have already been forced to flee the country and are scattered in refugee camps throughout Southeast Asia), one can only imagine the kind of sinister plans which are being put into action, amid the deafening international silence.

In fact, ‘silence’ is an understatement, for following the early wave of devastating violence, European officials welcomed the country’s ‘measured response’ and spokesperson for the EU’s high representative on foreign affairs, Catherine Ashton, said on June 11: “We believe that the security forces are handling this difficult inter-communal violence in an appropriate way.”

Meanwhile, western countries led by the United States, are clamoring to divide the large Burmese economic cake amongst themselves. As Rohingya boats were floating (or sinking) in various waters, Burma’s President Sein met with Norway’s Prime Minister Jens Stoltenberg in a ‘landmark’ visit in Oslo on February 26. Regarding the conflict in Arakan, Jens Stoltenberg unambiguously declared it to be an internal Burmese affair, reducing it to the most belittling statements. In regards to ‘disagreements’ over citizenship, he said, “we have encouraged dialogue, but we will not demand that Burma’s government give citizenship to the Rohingyas.” Moreover, to reward Sein for his supposedly bold democratic reforms, Norway took the lead by waving off nearly half of its debt and other countries followed suit, including Japan which dropped $3 billion last year.

Meanwhile, the Rohingyas are left to ponder their punishment for flouting one discriminatory law or another. “Fear of punishment under the two-child rule compel far too many Rohingya women to risk their lives and turn to desperate and dangerous measures to self-induce abortions,” Asia director at Human Rights Watch (HRW) Brad Adams said in a report published May 28.

No words can suffice to describe the plight of the Rohingyas who are trying to survive an unprecedentedly violent ethnic purge, with support and complicity of the Burmese government and silence of the very western governments that never cease to preach democracy and human rights.

Matthew Smith is a researcher for HRW and author of the organization’s report, “‘All You Can Do is Pray’: Crimes Against Humanity and Ethnic Cleansing of Rohingya Muslims in Burma’s Arakan State”. Concluding a commentary in CNN online, Smith wrote: “The world should not be blinded by the excitement of Myanmar’s political opening. Rohingya are paying for that approach with their lives.” Since then, more Rohingyas were killed, many more homes, mosques, shops and orphanages were burned to the ground and there has been no international uproar as of yet.