Afghanistan War May End By 2024… Maybe 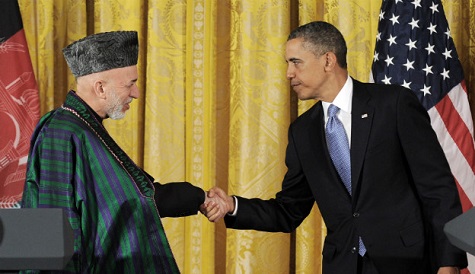 Several important issues in the Washington-Kabul post-2014 negotiations seem to have been decided, including a U.S. payment of at least $10 billion a year to train and pay for some 400,000 Afghan soldiers and police officers. Among the remaining issues are two of considerable importance: troop strength and legal immunity for American personal (both for soldiers and tens of thousands of U.S. “contractors” who will remain in the country).

Reports circulated in the last few months that between 3,000 and 20,000 U.S. troops, mainly Special Forces, CIA contingents, drone operators, and contractors of various kinds, will remain after 2014. The main air cover is expected to come from Navy aircraft carriers probably stationed in the Arabian Sea or Indian Ocean. Drones are expected to play a major role in battle as well as surveillance. Last year, there were some 400 drone attacks in Afghanistan, and that number is expected to continue increasing.

The New York Times reported Jan. 3 that “Gen. John R. Allen, the senior American commander in Afghanistan, has submitted military options to the Pentagon that would keep 6,000 to 20,000 American troops in Afghanistan after 2014…. With 6,000 troops, defense officials said, the American mission would largely be a counterterrorism fight of Special Operations commandos who would hunt down insurgents. There would be limited logistical support and training for Afghan security forces. With 10,000 troops, the United States would expand training of Afghan security forces. With 20,000 troops, the Obama administration would add some conventional Army forces to patrol in limited areas.”

The May 11 New York Times reported that “The Obama administration has yet to decide how large a force it would like to keep in Afghanistan, but administration officials have signaled that it is unlikely to total more than 10,000 service members. They said it was more important now to hash out a range of issues, like whether American troops would continue to have legal immunity in Afghanistan after next year, than to talk about the specifics of where troops would be based.”

The big remaining issue is immunity for U.S. personnel. Our guess is that, unlike in Iraq — where conditions are far different — Washington will find a way around the issue. It is difficult to see how the Kabul government of Karzai or his successor in next year’s elections can survive for long without substantial American financial support for a prolonged period.

American forces are engaged in Obama’s drone wars in western Pakistan, Yemen, Somalia and soon Africa. Regime change in Libya would not have occurred had the Obama Administration refused to participate. President Obama has been fanning the flames of regime change in Syria for nearly two years, and now he’s about to up the ante. He’s strangling Iran with unjust sanctions and keeps warning that war is possible. He calls Hezbollah, the Shia self-defense organization in Lebanon, a terrorist organization, as he does Hamas in Gaza, the victim of overwhelming Israeli hatred and violence. And now Obama is moving more military power to East Asia to confront China.

If George W. Bush was in the White House today, a huge American peace movement would be out on the streets demanding an end to America’s endless immoral wars. But now a Democrat officiates in the Oval Office, his Nobel Peace Prize wisely hidden in a dark closet lest his militarist propensities provoke an unseemly contrast.

Obama’s many wars are but extensions of Bush’s wars plus killer drones, but the great majority of Americans either seem to have forgotten or simply don’t care about the wars, even though their tax money will amount to $80 billion for Afghanistan in fiscal 2014. Meanwhile, Pentagon generals anticipate various new wars of one kind or another well into the future. The battle against al-Qaeda is expected to last 20 more years. The world has become America’s battlefield.

Afghanistan? Didn’t we have a war there once? Oh, that’s right, it ended when we got rid of Bush, didn’t it?