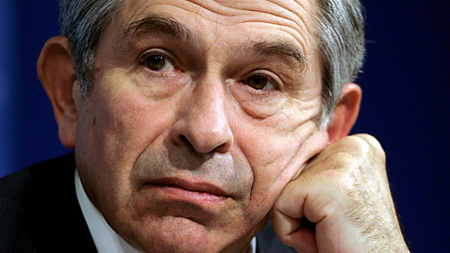 Three years ago this month, I wrote a piece entitled “Who’s to Blame for the Iraq War?” to mark the seventh anniversary of the US invasion. My sole purpose in compiling a by-no-means-exhaustive list of 20 Israel partisans who played key roles in inducing America into making that disastrous strategic blunder was to help dispel the widespread confusion — some of it sown under the guise of “progressive investigative journalism” by likely crypto-Zionists – about why the United States made that fateful decision. As the tenth anniversary approaches, there is no excuse for anyone genuinely interested in the facts to deny the ultimate responsibility of Tel Aviv and its foreign agents for the quagmire in Iraq. Nevertheless, it’s an appropriate time to remind ourselves of some of the chief architects of the devastating Iraq War.

1. Ahmed Chalabi, the source of much of the false “intelligence” about Iraqi WMD, was introduced to his biggest boosters Richard Perle and Paul Wolfowitz by their mentor, a University of Chicago professor who had known the Iraqi con man since the 1960s. An influential Cold War hawk, Albert Wohlstetter fittingly has an American Enterprise Institute (AEI) conference centre named in his honor.

2. In 1982, Oded Yinon’s seminal article, “A Strategy for Israel in the 1980s” was published in Kivunim, a Hebrew-language journal affiliated with the World Zionist Organization. “Iraq, rich in oil on the one hand and internally torn on the other, is guaranteed as a candidate for Israel’s targets,” advised Yinon. “Its dissolution is even more important for us than that of Syria. Iraq is stronger than Syria. In the short run it is Iraqi power which constitutes the greatest threat to Israel.”

3. “A Clean Break: A New Strategy for Securing the Realm,” a report prepared for Israeli Prime Minister Benjamin Netanyahu in 1996, recommended “removing Saddam Hussein from power in Iraq—an important Israeli strategic objective in its own right.” Richard Perle, chairman of the Pentagon’s Defense Policy Board during the initial years of the George W. Bush administration, was the study group leader.

4, 5. A November 1997 Weekly Standard editorial entitled “Saddam Must Go” opined: “We know it seems unthinkable to propose another ground attack to take Baghdad. But it’s time to start thinking the unthinkable.” The following year, the Project for the New American Century (PNAC), an influential neoconservative group, published a letter to President Clinton urging war against Iraq and the removal of Saddam Hussein on the pretext that he was a “hazard” to “a significant portion of the world’s supply of oil.” PNAC co-founders William Kristol and Robert Kagan also co-authored the “Saddam Must Go” editorial.

6. In Tyranny’s Ally: America’s Failure to Defeat Saddam Hussein, published by AEI Press in 1999, David Wurmser argued that President Clinton’s policies in Iraq were failing to contain the country and proposed that the US use its military to redraw the map of the Middle East. He would go on to serve as Mideast adviser to Vice President Dick Cheney from 2003 to mid-2007.

7. On September 15, 2001 at Camp David, Deputy Defense Secretary Paul Wolfowitz attempted to justify a US attack on Iraq rather than Afghanistan because it was “doable.” In the lead-up to the war, he assured Americans that it was “wildly off the mark” to think hundreds of thousands of troops would be needed to pacify a postwar Iraq; that the Iraqis “are going to welcome us as liberators”; and that “it is just wrong” to assume that the United States would have to fund the Iraq war.

8. On September 23, 2001, Senator Joe Lieberman, who had pushed for the Iraq Liberation Act of 1998, told NBC’s “Meet the Press” that there was evidence that “suggests Saddam Hussein may have had contact with bin Laden and the al-Qaeda network, perhaps [was] even involved in the September 11 attack.”

9. A November 12, 2001 New York Times editorial called an alleged meeting between Mohammed Atta and an Iraqi agent in Prague an “undisputed fact.” Celebrated for his linguistic prowess, columnist William Safire was egregiously sloppy in his use of language here.

10. A November 20, 2001 Wall Street Journal op-ed argued that the US should continue to target regimes that sponsor terrorism, claiming, “Iraq is the obvious candidate, having not only helped al Qaeda, but attacked Americans directly (including an assassination attempt against the first President Bush) and developed weapons of mass destruction.” The professor of strategic studies at the Nitze School of Advanced International Studies, Johns Hopkins University who made these spurious claims was Eliot Cohen.

11. George W. Bush’s January 2002 State of the Union address infamously described Iraq as part of an “axis of evil.” It was David Frum, Bush’s Canadian-born speechwriter, who coined the provocative phrase.

12. In a February 2002 article entitled “How to win World War IV,” Norman Podhoretz, the longtime editor of Commentary magazine, asserted: “Yet whether or not Iraq becomes the second front in the war against terrorism, one thing is certain: there can be no victory in this war if it ends with Saddam Hussein still in power.”

13. Kenneth Adelman, Defense Policy Board member and PNAC signatory, predicted in a February 13, 2002 Washington Post op-ed: “I believe that demolishing Hussein’s military power and liberating Iraq would be a cakewalk.”

14. On August 3, 2002, Charles Krauthammer, the psychiatrist-turned-Washington Post columnist, enticed Americans with this illusory carrot: “If we win the war, we are in control of Iraq, it is the single largest source of oil in the world…. We will have a bonanza, a financial one, at the other end, if the war is successful.”

15. In a September 20, 2002 Wall Street Journal op-ed entitled “The Case for Toppling Saddam,” current Israeli Prime Minister Benjamin Netanyahu warned that Saddam Hussein could be hiding nuclear material “in centrifuges the size of washing machines” throughout the country.

16. “Why would Iraq attack America or use nuclear weapons against us? I’ll tell you what I think the real threat (is) and actually has been since 1990—it’s the threat against Israel.” Despite this candid admission to a foreign policy conference at the University of Virginia on September 10, 2002, Philip Zelikow, a member of President Bush’s Foreign Intelligence Advisory Board, authored the National Security Strategy of September 2002 that provided the justification for a preemptive war against Iraq.

17. According to a December 7, 2002 New York Times article, the role of convicted Iran-Contra conspirator Elliott Abrams during Colin Powell’s efforts to negotiate a resolution on Iraq at the United Nations was “to make sure that Secretary Powell did not make too many concessions to the Europeans on the resolution’s wording, pressing a hard-line view.” Abrams was senior director of Near East and North African affairs at the National Security Council during the George W. Bush administration.

18. Lewis “Scooter” Libby, who was Vice President Cheney’s chief of staff until he was indicted for lying to federal investigators in the Valerie Plame case, helped draft Colin Powell’s fraudulent February 5, 2003 UN speech.

19. According to Julian Borger’s July 17, 2003 Guardian article entitled “The spies who pushed for war,” the Pentagon’s Office of Special Plans (OSP) “forged close ties to a parallel, ad hoc intelligence operation inside Ariel Sharon’s office in Israel” to provide the Bush administration with alarmist reports on Saddam’s Iraq. Douglas Feith was the Under Secretary of Defense for Policy who headed the OSP.

20. Bernard Lewis, a British-born professor emeritus of Near Eastern Studies at Princeton University whose 1990 essay “The Roots of Muslim Rage” introduced the dubious concept of a “Clash of Civilizations,” has been called “perhaps the most significant intellectual influence behind the invasion of Iraq.”