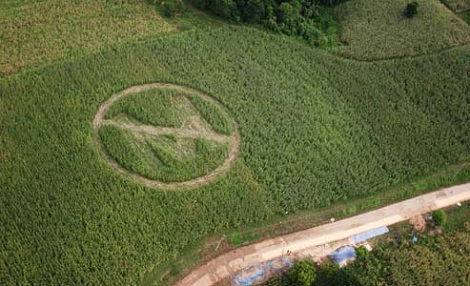 An anti-Monsanto crop circle made by local farmers and Greenpeace volunteers in the Philippines. (Photo: Melvyn Calderon / Greenpeace / AP)

An anti-Monsanto crop circle made by local farmers and Greenpeace volunteers in the Philippines. (Photo: Melvyn Calderon / Greenpeace / AP)

In the United States everything is polluted.

Democracy is polluted with special interests and corrupt politicians.

Accountability is polluted with executive branch exemptions from law and the Constitution and with special legal privileges for corporations, such as the Supreme Court given right to corporations to purchase American elections.

The Constitution is polluted with corrupt legal interpretations from the Bush and Obama regimes that have turned constitutional prohibitions into executive branch rights, transforming law from a shield of the people into a weapon in the hands of government.

Waters are polluted with toxic waste spills, oil spills, chemical fertilizer run-off with resulting red tides and dead zones, acid discharges from mining with resulting destructive algae such as prymnesium parvum, from toxic chemicals used in fracking and with methane that fracking releases into wells and aquifers, resulting in warnings to homeowners near to fracking operations to open their windows when showering.

The soil’s fertility is damaged, and crops require large quantities of chemical fertilizers. The soil is polluted with an endless array of toxic substances and now with glyphosate, the main element in Monsanto’s Roundup herbicide with which GMO crops are sprayed.

Glyphosate now shows up in wells, streams, and in rain.

Air is polluted with a variety of substances, and there are many large cities in which there are days when the young, the elderly, and those suffering with asthma are warned to remain indoors.

All of these costs are costs imposed on society and ordinary people by corporations that banked profits by not having to take the costs into account. This is the way in which unregulated capitalism works.

Our food itself is polluted with antibiotics, growth hormones, pesticides, and glyphosate.

Glyphosate might be the most dangerous development to date. Some scientists believe that glyphosate has the potential to wipe out our main grain crops and now that Obama’s Secretary of Agriculture, Thomas Vilsack, has approved genetically modified Roundup Ready alfalfa, maintaining sustainable animal herds for milk and meat could become impossible.

Alfalfa is the main forage crop for dairy and beef herds. Genetically modified alfalfa could be unsafe for animal feed, and animal products such as milk and meat could become unsafe for human consumption.

On January 17, 2011, Dr. Don Huber outlined the dangers of approving Roundup Ready alfalfa in a letter to Secretary of Agriculture Vilsack. Huber requested that approval be delayed until independent research could evaluate the risks. Vilsack ignored the letter and accommodated Monsanto’s desire for monopoly profits that come from the company’s drive to control the seed supply of US and world agriculture by approving Roundup Ready alfalfa.

Who is Don Huber, and why is his letter important?

Huber is professor emeritus at Purdue University. He has been a plant pathologist and soil microbiologist for a half century. He has an international reputation as a leading authority. In the US military, he evaluated natural and manmade biological threats, such as germ warfare and disease outbreaks and retired with the rank of Colonel. For the USDA he coordinates the Emergent Diseases and Pathogens Committee. In other words, he is high up in his scientific profession.

You can read online what Huber told the Secretary of Agriculture.  Briefly, the outcome of many years of Roundup Ready GMO corn and soybeans has been a decline in nutritional value, the outbreak of new plant diseases resulting in widespread crop failures, and severe reproductive problems in livestock, with some herds having a spontaneous abortion rate that is too high to maintain a profitable business.

Glyphosate is a powerful biocide. It harms beneficial soil organisms, altering the natural balance in the soil and reducing the disease resistance of crops, thus unleashing diseases that devastate corn, soybean, and wheat crops, and giving rise to a new pathogen associated with premature animal aging and infertility.  These developments, Huber told the Agriculture Secretary, “are threatening the economic viability of both crop and animal producers.”  The evidence seems to be real that genetically modified crops have lost their genetic resistance to diseases that never previously were threats.

There is evidence that the new pathogen is related to a rise in human infertility and is likely having adverse effects on human health of which we are still uninformed. Like fluoride, glyphosate might enter our diet in a variety of ways. For example, the label on a bottle of Vitamin D says, “Other ingredients: soybean oil, corn oil.”

Monsanto disputes Huber’s claims and got support for its position from the agricultural extension services of Iowa State and Ohio State universities. However, the question is whether these are independently funded services or corporate supported, and there is always the element of professional rivalry, especially for funding, which comes mainly from agribusiness.

The Purdue University extension service was more circumspect. On the one hand it admits that there is evidence that supports Huber’s claims:  “The claim that herbicides, such as glyphosate, can make plants more susceptible to disease is not entirely without merit. Research has indicated that plants sprayed with glyphosate or other herbicides are more susceptible to many biological and physiological disorders (Babiker et al., 2011; Descalzo et al., 1996; Johal and Rahe, 1984; Larson et al., 2006; Means and Kremer, 2007; Sanogo et al., 2000; Smiley et al., 1992). . . .  Although some research indicates there is an increase in disease severity on plants in the presence of glyphosate, it does NOT necessarily mean that there is an impact on yield.”

On the other hand, the Purdue extension service maintains its recommendation for “judicious glyphosate use for weed control.”  However, one of Huber’s points is that weeds are developing Roundup resistance. Use has gone beyond the “judicious” level and as glyphosate builds up in soil, its adverse effects increase.

A submission to the Environmental Protection Agency by 26 university entomologists describes the constraints that agribusiness has put on the ability of independent scientists to conduct objective research. The submission, in which the scientists are afraid to reveal their names because of the threat of funding cutoffs, is included as an item in one of the bibliographical references below. Here is the statement:

“The names of the scientists have been withheld from the public docket because virtually all of us require cooperation from industry at some level to conduct our research.  Statement: Technology/stewardship agreements required for the purchase of genetically modified seed explicitly prohibit research. These agreements inhibit public scientists from pursuing their mandated role on behalf of the public good unless the research is approved by industry. As a result of restricted access, no truly independent research can be legally conducted on many critical questions regarding the technology, its performance, its management implications, IRM, and its interactions with insect biology. Consequently, data flowing to an EPA Scientific Advisory Panel from the public sector is unduly limited.”

Monsanto is not only sufficiently powerful to prevent any research other than that which it purchases with its funding, but also Monsanto succeeded last year in blocking with money and propaganda the GMO labeling law in California.  I would tell you to be careful what you eat as it can make you ill and infertile, but you can’t even find out what you are eating.